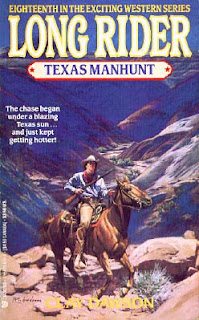 TEXAS MANHUNT
as by Clay Dawson
Diamond, March 1992
Long Rider is heading for a new job in El Paso when he meets up with three mean-looking men and a young woman. The lady would be a real beauty if she wasn’t battered up so bad…and Long Rider doesn’t buy the story that she was thrown from her horse.
Sure enough, the trio turns out to be trouble. They’re kidnappers and bank robbers, and it is Long Rider’s job to bring them to justice. He’s been deputized by Judge Roy Bean himself – but that doesn’t help much when he’s up against crooks, liars and cheats…and even the law itself!
Long Rider doesn’t appear in that much of the first part of this book, the author spends most of this time writing about the falling out amoung the bank robbers, and how two of them rob a bank, and their former partner then taking advantage of the fact that most of the lawmen are riding in the posse, leaving the town defenceless, he robs another bank. With the outlaws heading down different trails Long Rider has his work cut out to bring them to justice.
The outlaws are well-drawn characters, particularly the headstrong Ace. In fact I found them to be just as interesting characters as Long Rider. The author also includes a couple of strong female roles.
There’s plenty of action as the book races to its conclusion and no threads are left untied.
All in all this was a satisfying read.
Posted by Steve M at 10:38

This sounds like another interesting title - I bought a pack of over 50 old paperback westerns so expect some more western centric review from me.

Look forward to them Gary.

I'm guessing not all the long riders books were by the same hand - ?

You'd be correct with your guess, although I'm not sure who wrote which. I believe Ernest Grafe wrote the first one and some of the others were written by Leonard Levinson and Gary McCarthy, along with a couple more writers.