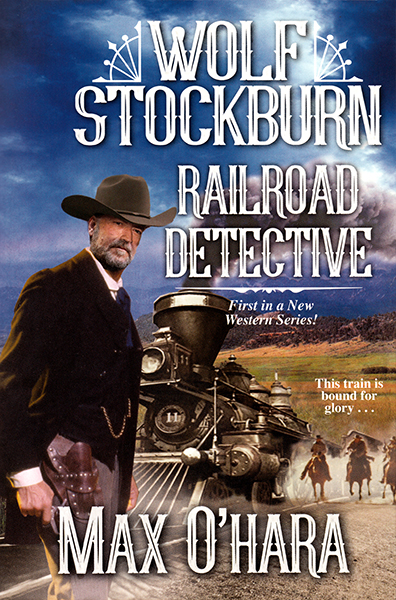 The newspapers call them the Devil’s Horde. A well-oiled team of cutthroat bandits who terrorize the Northern Pacific Railway on route to the coast through Dakota Territory. They dynamite the tracks, blow open the express car door, murder the crewmen, rob the passengers, and empty the safe of gold and cash. If Wells Fargo & Company can’t find a way to stop the Devil’s Horde, there’ll be hell to pay . . .

Enter Wolf Stockburn. A tall, rangy Scotsman who dresses like a gentleman but shoots like a cowboy, Stockburn learned his craft from a legendary gunfighter – and honed his skills as a Pony Express rider through hostile Indian country. Now the veteran Wells Fargo detective will ride the rails from coast to coast. Make sure the train and its passengers reach their destination safely. And take down the Devil’s Horde – one by one, bullet by bullet – the devil be damned . . .

The author uses a very different method of telling the story in the opening chapter that is extremely effective and memorable. After that the tale is told in a more traditional way. O’Hara has created a terrific cast for this opening book in a new series, not least the title character. Wolf Stockburn is tough and determined and haunted by a dark past that is revealed throughout the tale. We also discover that he has been searching for his missing sister and has been doing so for years. Two women give Wolf plenty of trouble, their instant dislike of each other providing some cracking dialogue. Both have important roles to play in the outcome of this excellent read.

The story builds well, captivating the reader easily. Plot twists and cliff-hanger chapter endings ensure the reader will want to keep turning the pages. There’s plenty of action, often quite graphic in description. There’s also a race against time to stop a train robbery and its crew and passengers from death that makes for gripping reading. Over all of this hangs the question of who are the Devil’s Horde?

The ending is tense, bloody and exciting, bringing the story to a satisfying close. I was left eager to read the next volume in the series, Hell’s Jaw Pass, that is due to be published in August, 2021. On the strength of this book, let’s hope that the Wolf Stockburn series is in for a long run. 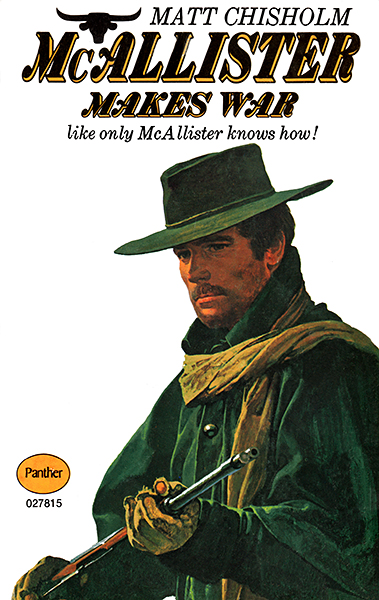 Rem McAllister was the embodiment of his turbulent age. He made his own law. He carried out his own justice. He killed his own snakes. He was a legend in his lifetime.

Vengeance – for his friend, shot down right in front of his eyes. Vengeance – against the toughest, cruellest, all-fired meanest operator the West had ever seen, a man who took what he wanted just whenever he wanted it. Gold, other men’s lives, control of the whole damn’ town, he grabbed it all.

Rem McAllister set out to avenge his friend and clean up the town. All he had to fight with were his two fists, his gun – and his courage. But these were weapons McAllister knew how to handle better than any man around…

McAllister is probably the most successful character Matt Chisholm created. McAllister starred in 39 books, a couple of them being put out under a different pseudonym, Cy James. Those books were eventually re-written and put out under the Matt Chisholm name with different titles. This happened to a couple of the Chisholm McAllister books too. McAllister made brief appearances in other westerns by this author as well. So successful were the McAllister books that they were reprinted time and again. The book featured in this review was reprinted in the same year it was originally published.

Ever since reading my first McAllister book I’ve been a massive fan. Not just of McAllister but of the authors work overall. The authors real name is Peter Watts and he wrote westerns under the pennames of Matt Chisholm, Cy James and Luke Jones. He had over 100 westerns published. I’m pleased to say I own every one of them.

McAllister Makes War is a great entry in the series. As is usually the case with this authors work, this book is packed with action. Tough men, and women, battle it out with words, fists and guns. The plot doesn’t offer any surprises as it moves forward at an extremely rapid pace. McAllister believes he knows who’s responsible for the death of his friend but needs proof. Whenever he arrests someone he hopes to persuade to tell the truth they meet a violent death. Even being locked up in jail doesn’t save them. Frustrated, McAllister pushes hard, alienating himself to many, but that doesn’t bother him, he needs the guilty to make a mistake. It isn’t long before gunmen are set on McAllister and the town erupts in all out war.

If you like fast-moving westerns with a tough gritty edge then this book, indeed this series, is certainly worth looking for. One thing for sure, I won’t be letting too much time pass before I grab another off my shelves. 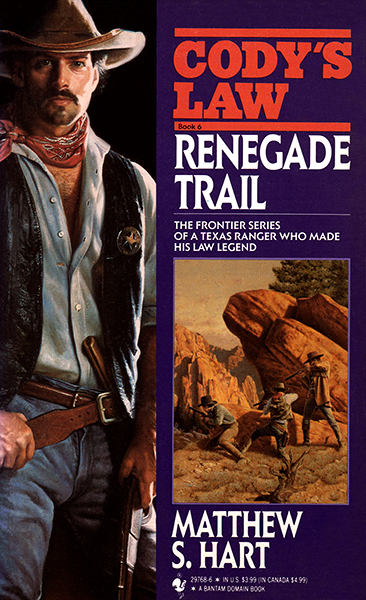 Many a time Cody has eaten the alkali dust of West Texas while riding on the trail of a hardcase killer…but never in pursuit of a sworn comrade. Barry Whittingham used to be a Ranger. Now he’s a lawless gun. Spreading hot lead with a heavy hand, the onetime Ranger heads a gang of desperadoes preying on the army supply train running through the burgeoning territory.

Cody’s the manhunter with the guts for the job, but his former friend-turned-outlaw might recognize him – so Cody has to team up with a straight-shooting young firebrand who will handle the undercover work. But when the inexperienced Ranger becomes involved in a holdup and Whittingham gang abducts a lovely young innocent, Cody must step in…to prevent a wide-open bloodbath and a war on the open range.

So far, Cody’s Law has proved to be a very entertaining series, and this book more than matches those that have gone before it in terms of quality and enjoyment. The storyline is gripping and has plenty of plot twists. The book is filled with excellent dialogue and frantic action scenes.

The inexperienced Ranger, Seth Williams, soon finds himself in all kinds of trouble and you do have to wonder if he’ll survive. There are also two young women who have major roles to play and their involvement adds to some of the mystery elements of the tale and will have a big impact on how things end. Whittingham proves to be a terrific adversary who is hoping to leaving his outlaw life behind him, but unknown to him, some of his men are plotting against him.

Matthew S. Hart is a pseudonym, and like all the books before, this one was written by James Reasoner, and as is expected from this author Renegade Trail proved to be a terrific read that was difficult to put down as I just had to find out what happened next.