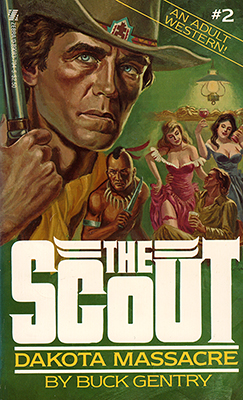 
The cry is “massacre!” when a town is brutally stormed by a band of rampaging Indians. Before anyone can retaliate the surprise attack, Eli Holten sets out for Sioux territory. Since he spent six years of his life learning the ways of the Plains, the Scout knows the tribe and the territory like the back of his hand. And his instincts tell him that someone’s been playing a dirty trick.

Holten soon learns that army deserters have been masquerading as deadly Indians. They have been killing and scalping their victims – and now they’ve kidnapped his girl. Holten won’t take things lying down, not when his lady is held hostage, and not when his name is at stake –

Emblazoned on the cover and spine of this book are the words adult western and this book is part of a number of series launched around this time by Zebra and other publishers under this banner. The opening scenes of Dakota Massacre fitting this theme perfectly, lasting a number of pages and described in explicit detail. But once Holten and Rebecca go their separate ways this story moves quickly into an all-out action-packed battle between Holten, the deserters, and the Sioux. Of course, there are a few more adult sessions but the vast majority of the book concerns the desperate fights to survive.

The author certainly doesn’t give Holten much time to catch his breath between adult or violent encounters. Most of the deadly bouts begin only a few lines after the previous bloody fight. At the rate Holten was eliminating Sioux warriors I did begin to wonder if he’d wipe out the entire nation in this one story. Holten doesn’t get it all his own way though, but he does seem to be able to shrug off wounds in minutes and continue with his mission as if he was never hit.

The battles are described in gory detail, spurting blood, shattered bone and spilled body contents vividly defined. At one-point Holten is tortured and what he has to endure is painfully detailed. The torture sequence leads to a truly nail-biting how is he going to get out of that alive scene acted out in the aptly named Canyon of Death.

Buck Gentry is a pseudonym behind which a number of different authors wrote, and this one was probably written by Steve Clark and I believe he wrote most of the early entries in this series.

If you enjoy violent westerns that contain almost non-stop savage action and don’t mind some explicit sex scenes then this a book, and series, that should be on your reading list. Dakota Massacre left me looking forward to reading the next one very soon. 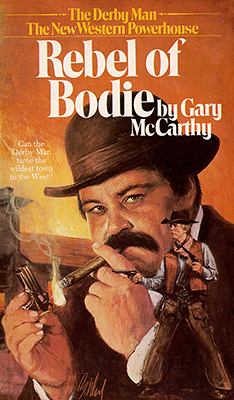 
When Rebel Morgan was the law, Bodie, California had been a town of hope and promise. Bodie was “the Wildest Town in the West” now, and ex-sheriff Rebel was the whiskey-soaked town joke. A broken and bitter man since his wife’s brutal murder, Rebel had been unwilling to stem the rising bloody tide of violence and corruption that now threatened to destroy Bodie. But Darby Buckingham hits Bodie with both fists swinging, fiercely determined to whip Rebel back up to his former strength and to lend his muscle to wipe out the town’s savage criminals. Every low-life in Bodie rises to Darby’s challenge, unleashing a relentless onslaught of terror and killing. But the hard-hitting, quick-witted Derby Man would give Bodie the roughest judgement day the West had ever seen.

Gary McCarthy’s Derby Man has got to be one of the most unusual western heroes ever. He’s a large ex-circus strongman and prize-fighter who is now a dime novel author roaming the west searching out real people to write about in his books and he feels Rebel Morgan could be the star of his next pulp.

Darby’s quest for the truth about Rebel’s fall from grace will unearth some heart-breaking truths, truths that have been suspected but purposely ignored. As friendships are tested the death toll rises and Buckingham soon has a number of people looking to bury him as fast as possible.

McCarthy has brought together a great cast of characters for this tale, both male and female, good and bad. The story is told from various people’s viewpoints and later on its mainly from characters other than Buckingham. Connor O’Grady, who was introduced in the previous book, North Chase, has a large part to play in this tale, and as well as getting in some deadly situations that seem to offer no avenue of escape, he provides most of the more light-hearted moments in the story too.

For me, this is another great entry into a series that offers a western hero who is a little bit different from the norm.

Long out of print, this series is now available as ebooks. 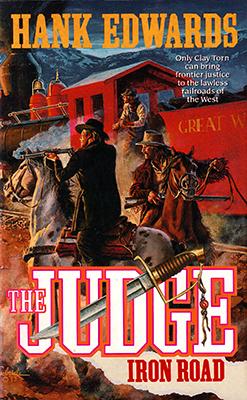 
First there’s fire on the tracks a few miles short of Whiskey Flat, then cannon shots turn the Great Western’s locomotive into a mass of twisted steel. Tempers flare and the stakes are high as two rival railroads race to drive a spur through Wolf Creek Pass – a line that will make a fortune freighting gold and silver from the rich Colorado mines.

Suddenly Clay Torn stands alone against vicious saboteurs led by men who think their powerful political connections put them above the law. But Judge Torn is going to make sure Great Western gets a fair shake – even if it means giving Coastal & Northern a righteous run for the money.

A storyline that has turned up in many western books but I can’t remember reading another where one railroad company employs a band of ex-confederate soldiers who refused to surrender using a cannon to destroy the oppositions locomotives. This alone adds a neat twist to this tale. Torn’s method for dealing with this is nicely done too but does lead to complications later on.

The story mainly follows Torn but some chapters and scenes are told from other characters viewpoints so the reader knows who is doing what and for what reason. Having said that there is one person who I thought wasn’t quite who they said they were and I was proven correct but not as I expected and this revelation and the violent act it leads to came as a complete surprise adding a welcome twist to the tale.

Hank Edwards is a pseudonym for Jason Manning who wrote ten out of the twelve books in this series, and he keeps the story moving forwards at a fast pace as Judge Torn tries to discover who are the spies and saboteurs and then work out a way to stop their deadly tactics. In doing so Torn will have to face a lethal adversary who he first met in the previous book, Death Warrant, and this time there isn’t any way to escape a face-off Torn knows he can’t win.

Like all the other books in this series I found this one to be a quick and entertaining read and I’m sure it won’t be long before I pick up the final book to see if the series comes to an end and Torn finds the woman he’s been searching for since it began. 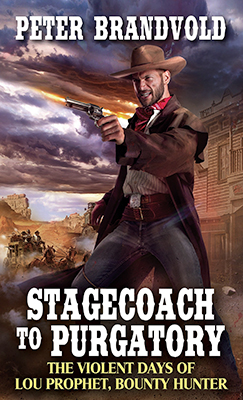 
After many years of ebook and/or hardback only releases it’s great to see the name of Peter Brandvold fronting a mainstream paperback again. Lou Prophet is one of Pete’s most popular characters and this book contains not one but two stories about the bounty hunter.

LAST STAGE TO HELL
What do you get when you take one stagecoach out of Denver, add a thousand-or-so bullets whizzing past your head, while sitting next to two headless corpses caught in the crossfire? If your name is Lou Prophet, you get raucous, rowdy, ruthless revenge. Next question?

DEVIL BY THE TAIL
How do you catch a fork-tongued demon who’s busted out of prison to wreak unholy hell on a small Texas town? If you’re Lou Prophet, you team up with red-hot Louisa Bonaventura, aka “The Vengeance Queen,” and cut a swath of merciless Prophet mayhem in return.

Due process be damned…

Each of these stories clocks in at just under 200 pages long so Pete has plenty of time to create devious plots that move forward at an extremely fast pace and involve regular bouts of gunplay. Prophet’s shotgun being used to devastating effect on many occasions, perhaps most memorably in the first story when the bounty hunter is trapped in an overturned stagecoach.

Peter Brandvold writes tough, brutal tales filled with fascinating characters that don’t let up with the action for a second. As mentioned in the blurb for the second story it’s great to see him working alongside Louisa Bonaventura again (she’s appeared in most of the previous Prophet books) and Prophet has to deal with the green-eyed monster of jealousy in this one as well as some vicious people.

The first story sees Prophet’s lust for the ladies get him into real trouble and a letter from another woman seems to be a way out of this deadly situation. Of course, this letter asking for help turns into another life and death struggle. Long-time readers of the Prophet books should remember the lady asking for help for she is Lola Diamond who appeared in the first book in the series.

Whereas the first story is more of a straightforward tale the second is filled with twists and turns. Many of these surprises quite shocking – and I can’t reveal more without spoiling them – as who did what to whom and what the real relationships between characters are come to light, not to mention the whereabouts of a missing baby.

I’m sure all fans of Peter Brandvold’s work have probably already read this and enjoyed it as much as I did. If you’ve yet to discover Mean Pete’s writing then this could just be the perfect place to start as it seems to be the beginning of another run for Lou Prophet in paperback. The second book is already out and a third is scheduled for release in July. Stagecoach to Purgatory is a superb read and I’ll certainly be picking up the next one as soon as I can.