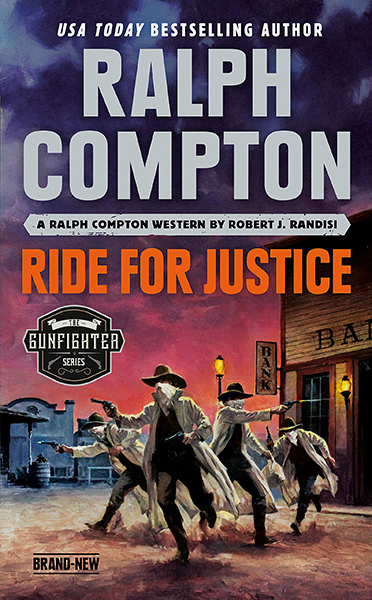 Matt Wheeler was a legend in the West. His fast gun and dedication to justice made him a sought-after lawman for hire, but all of that promise vanished one sunny day when his wife was shot down in cold blood by a heartless band robber.

The thirst for vengeance sent Wheeler on a quest to find the killer. For taking the law into his own hands, the former lawman was convicted and sent to prison.

Seven and a half years have passed, and Wheeler has completed his sentence. One question remains: Will he ride for vengeance or for justice?

The first part of this book concentrates on Wheeler’s attempts to get work so he can raise the money needed to travel to his wife’s grave. He also battles with the question of whether he wants to track down the other two men involved in his wife’s death. Wheeler is fairly old too, so another question is does he still have the stamina and ability to track and face the killers? It takes a while for Wheeler to figure out what he wants to do, and his wife’s grave plays a large part in his decision making.

Like the majority of books I’ve read by Robert Randisi, this is a fast-paced easy read. The tale is dialogue driven and action scenes are dealt with quickly and efficiently, so as not to hold up the fast-developing plot for too long. Randisi also has a neat twist waiting for the final scenes that makes for a memorable ending.

Many of Robert Randisi’s books mix real people with fictional characters and this is another of them. Bass Reeves, Judge Isaac Parker and President Porfirio Diaz all have import roles to play in the outcome of this book.

Fans of Robert Randisi’s books will certainly enjoy this one and if you are yet to try this author this could be the perfect place to start. 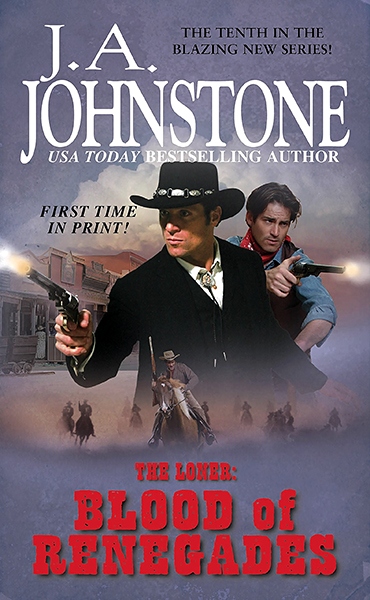 The damsel is in distress, or so it seems to Conrad Browning. On his way across the wide, tall Utah territory to California, the Loner meets a beautiful Mormon girl on the run from a forced wedding – and the gun-toting faithful trying to hunt her down. But there are two sides to every story – and the ones you don’t hear are the ones that can get you killed.

The runaway bride has a little history of her own. Soon, the Loner touches off a storm of unholy gunfire, drawing blood from an outlaw and a death sentence from a patriarch. Among murders and Mormons, Bibles and bullets, the Loner finds himself riding to a wedding – a ceremony he intends to crash with a vengeance…

Browning’s search for his missing children is interrupted by the runaway Mormon girl and the trouble she brings to the Loner. This is a story of the younger generation not wanting to follow the path of their elders. The Loner gets caught up in the middle of this as he decides to help the youngsters escape the grip of the Mormon leader and his band of Avenging Angels.

There is plenty of exciting action that doesn’t always involve gunplay, such as a very different method of escape across the salt flat of the likes I can’t remember reading about before. The Loner also has to deal with unfounded jealousy that could see him killed by one of those on the side he his trying to help.

The author is an expert at pacing and creating tension and that made it hard for me to put this book down as I just had to find out what happened next. The final battle proving to be spectacular in its destructive power.

When the Loner finally gets to continue with his search for his children the author springs a surprising twist to the tale that instantly had me wanting to read the next book in this terrific series. 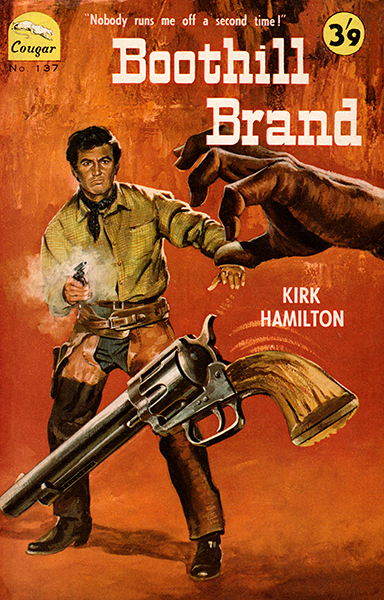 It was three years ago they’d run him out. Lou still bore the mark of Boothill on his chest – the brand he’d carry till he died. And the old man had waited for him to scream as they did it, and looked somehow disappointed when he didn’t.

“Come back here, Lou,” the old man had said meaningly, “And you die!”

They had thrown him off the ranch then. Without a horse, without his guns, with only what he stood up in. And Shane had stood and watched, her face expressionless.

He’s come back now. Come back to kill the old man, to kill Johnny Wena if he was still around, to humble the proud Shane and break her life for her as she had broken his.

Cougar books were part of Cleveland Publishing and like the majority of their publications they don’t carry a date, so it’s not easy to find out when they were published. This story is a re-issue, complete and unabridged, except for a title change from Danger Spread to Boothill Brand, which was originally put out under the Cleveland name. I’ve included the original below and I think the cover art of that first issue fits the story a lot better as it does illustrate a scene from the tale.

Lou Masters makes for an engaging lead character. He’s tough, quick with a gun, yet naïve, blinded by his love for Shane which leads him into many dangerous and life-threatening situations. Shane isn’t the only woman who will cause problems for him as he’s caught the eye of Lena Blair. There are some excellent twists and turns to the plot that sees both of these women get Lou on the wrong end of a gun.

The story never lets up in its fast pace as Lou is framed, struggles to recognize who is his enemy and who he can trust. Vicious gunmen arrive and it seems no-one is safe from their desire to take what they want and kill anyone who opposes them. There’s plenty of gunplay before everything leads to Lou having to face unbeatable odds which makes for a nail-biting climax.

Boothill Brand proved to be an excellent read, but then again, I thought it would having enjoyed many westerns by this author already. Kirk Hamilton is a pseudonym, one of a handful, used by Keith Hetherington, an Australian author who has had well over 600 stories published – probably closer to 1,000 – and he comes highly recommended by me. 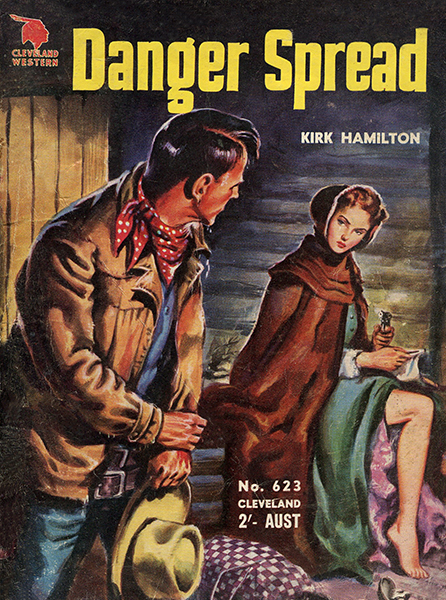 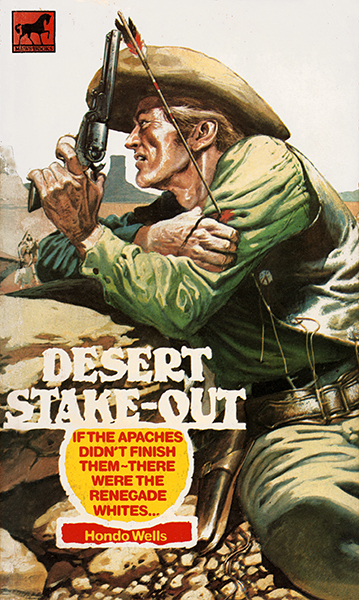 Any chance Merrick’s party had of escaping the Indian fury was gone now – destroyed by the gun-happy youth who had just killed the Apache who lay before them on the desert.

Now they could only wait the Apache revenge – and hope the three renegade white men didn’t turn on Merrick first.

And clear in Merrick’s mind was the fate that waited them all if the Indians took them alive – staked out in the sun, their mouths full of sand, praying they were dead . . .

The book begins by describing the harsh land through which Merrick is travelling. This inhospitable place offering a place of respite from a waterhole. It’s around this life-giving pool that most of this brutal tale takes place. Is it possible to escape this small waterhole as the Apaches are closing in, slowly, tormentingly? The author’s prose is as tough as the landscape and the despair and desperation of those trapped by the waterhole comes over extremely well.

There’s also the fear that the three outlaws may try to kill Merrick at any moment, steal his horses and make a break for freedom. The author creates a tense atmosphere that will have the reader on the edge of their seat.

As the story progresses then more questions need answers. Does Merrick know the three renegades? Who is in the grave by the waterhole that had been dug by Merrick? Why has the army sent him on a mission, alone, through a land filled with hostile Apaches?

The tale moves through a series of twists and turns as allegiances switch from one person to another. No one can trust anyone it seems.

There’s plenty of tough talk, eruptions of gunplay and double-cross before the Apaches close in, and when they do the plot takes on a much more vicious tone that sees some horrific, graphic acts of torture that lead to a surprising turn of events.

For me, Desert Stake-Out proved to be a gripping read that captured my imagination superbly and left me hungry to read more of Harry Whittington’s work as soon as I can. 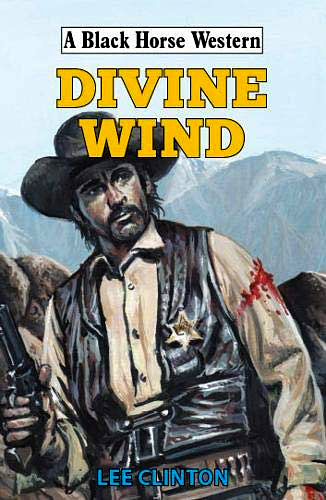 Robert Brodie was always a practical man. It helped him survive the war as a Texan Confederate - as a miner in Death Valley - and now as a muleskinner hauling borax across one of the most inhospitable places on the earth's surface. So, when an old Indian bestows the Divine Wind upon him from Tanka the Great Spirit, it is accepted with both bewilderment and scepticism. Especially, as Brodie is trapped under a four-ton borax wagon at the time and expecting to die of thirst...

The opening scenes of this book provide some excellent, tense reading that results in Brodie becoming trapped beneath the borax wagon. The arrival of the old Indian adds an extra element to the story. Is he real or just a figment of Brodie’s mind? From then on, the tale edges into the supernatural as strange events shape Brodie’s future, events that have no rational explanation. It’s these storylines that shape the rest of the tale as Brodie struggles to comprehend these twists of fate.

Amid all the strangeness there is plenty of action as Brodie finds himself helping a young lady deal out God’s justice as they track four killers. There are some particularly gruesome deaths, one killing done by the girl that will make all male readers shudder. The bond between Brodie and the girl becomes stronger and they begin to fall in love, but can this really work as Brodie is quite a lot older than Chastity?

I’ve got to mention the two mules, Sergeant Smith and Corporal Jones, whose antics at times had me laughing. Brodie’s relationship with these two animals being one of the many highlights of this book.

I’ve read and enjoyed all of Lee Clinton’s previous Black Horse Westerns. One of the things that I really like about his books is that they all have very different storylines and this one certainly keeps that trend going. The supernatural elements, real or not, taking this tale down a totally different trail to any of his others. Not being able to predict where the next Clinton plot will take me is one of the reasons that I always look forward to his next release.

Divine Wind is released on October 23rd but is available for pre-order now.