The Kerrigans A Texas Dynasty 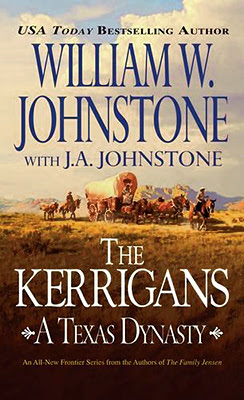 
A strong, beautiful mother of five, Kate Kerrigan has made do since losing her husband in the bloody Battle of Shiloh. Now, two years after the Civil War, there’s nothing left for them in Tennessee but poverty and bad memories. So Kate decides a better life awaits them in far-off West Texas. Thus begins a 1000-mile trek through some of the harshest and most dangerous territory on the frontier. But by pulling together, the Kerrigans discover the conviction to overcome the unimaginable hardships and the strength of spirit that will help them build one of the largest cattle empires in history of the American West.

It’s not that often that a western series has a woman as the lead character and that comes as a welcome change to the usual lone drifter. It’s interesting to see just how far she will go to protect her family. Kate is also a stunningly attractive woman and this has both positives and negatives depending on who is drawn to her.

This book begins in 1907 but after only a few pages the story moves back in time to tell of the ordeals that sees the Kerrigans decide to head to West Texas. So the vast part of this tale is a flashback and even this contains another jump back to tell of Kate’s husbands’ death.

The author doesn’t just stick with Kate Kerrigan, large parts of the book follow the fortunes and misfortunes of her children explaining the events that mould them all into the characters they are that set out to claim and build a cattle ranch.

The opening blurb taken from the book implies that much of the story will take place on the trail but this couldn’t be further from the truth. Most of the travel is glossed over and the story just deals with the meeting of people who will help the Kerrigans build their empire and of course the outlaws that do their best to stop them before they’ve even begun. Having said that there is an excellent section that covers the horror of being caught out in the open by a tornado.

This well-written, exciting and action-packed book ends with the Kerrigans arrival at what they hope will be their new home and the author concludes a number of storylines at this point, but also leaves some story threads dangling to ensure the reader will want to read the next book in the series, and that is something I will certainly be doing very soon. 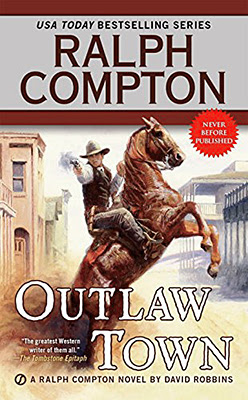 
Chancy Gantry and Ollie Teal are honest cowpunchers riding herd on fifteen hundred longhorns from Texas to Kansas. Their trail boss, Lucas Stout, is tough but fair. He’s never lost a hand on a drive and doesn’t aim to start now. So when a cowhand needs a sawbones bad, Stout sends Chancy and Ollie to escort the man to a town called Prosperity, which none of them has ever heard of.

At first glance, the town looks deserted – but the saloon is full. The dusty denizens of Prosperity are happy to help the ailing cowboy, especially when they hear about the herd grazing a few miles away. Chancy and Ollie are about to discover that some towns are a lot easier to ride into than to ride out of….

David Robbins presents the reader with a very interesting mix of characters, not least Ollie Teal, a man whom some would label as being backwards, his childlike wonder at everything and non-stop babble get on some peoples’ nerves but his loyalty to the brand and his pard, Chancy, are second to none.

There are other memorable characters too, both amongst the cowboys and the townspeople. The crippled doctor for instance and a handful of fast guns that will have you wondering who will come out on top should they have the need to face each other, something that has just got to happen, hasn’t it?

As one would hope for in a book written by David Robbins you get plenty of cracking dialogue, descriptions that portray the land, town, and emotions perfectly, placing you right there sharing the joys, laughter, horror and fear with the characters. And then there is the action, fast and brutal at times, that becomes almost non-stop when the cowboys realize the true intentions of those living in Prosperity.

There are plenty of edge-of-the-seat situations, surprises too, and it soon becomes apparent that you cannot predict who will be left alive at the end, if anyone. David Robbins ties everything up neatly and to say more would surely spoil the book for those intending to read it. My final thoughts are that this is a western all fans of the genre should enjoy.