THE TOMB OF IRON EYES 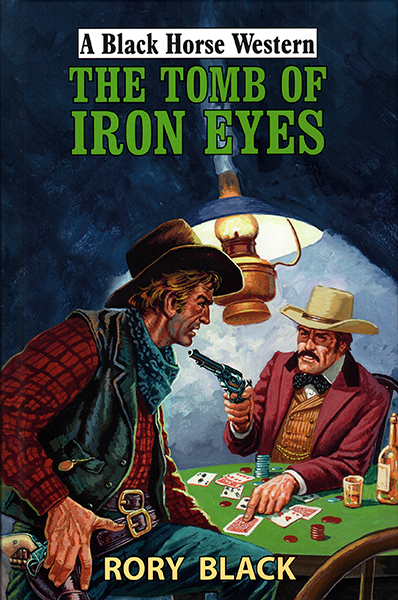 Infamous bounty hunter Iron Eyes has the scent of his prey in his flared nostrils and is determined to add yet another notch to the gun grip of his famed Navy Colt.

Iron Eyes never quits even when the odds are stacked against him.

Yet the closer he gets to where he knows the outlaw is holed up, the more guns are turned upon him. Refusing to submit to the lethal lead of the men paid to stop his progress, Iron Eyes forges on toward Cheyenne Falls and the fate he knows awaits him.

This is a fairly straight-forward track them down and kill them story. Having some gunmen waiting in Cheyenne Falls to take out Iron Eyes ensures there’s plenty of opportunity for some lively gunplay. There is also a twist in that someone has hired a professional gunfighter, Drako, to come to town and kill the bounty hunter and the author keeps the reason for this a secret from Iron Eyes and the reader until he is good and ready to reveal it.

Rory Black writes in a visual way, his words playing out like images on the silver screen, more in a spaghetti western style than those of John Ford. Black’s stories are as brutal as those European westerns, bleak, savage and full of stylish scenes. Iron Eyes isn’t a particularly likeable character, but he does command attention and you will want to know what happens to him next. Followers of this series will also be aware of Squirrel Sally, the girl who follows Iron Eyes and calls him her betrothed, even though Iron Eyes does his best to get rid of her. Sally has a part to play in this tale too and provides the occasional lighter moment to the story.

Like the other books in the series, The Tomb of Iron Eyes is a quick and entertaining read and left me wanting to read more.

This beautifully produced hardback book might be hard to find these days as they were aimed at libraries and rarely made it onto the shelves of bookstores. They do turn up second-hand though. Piccadilly Publishing are putting this series out as ebooks, and The Tomb of Iron Eyes is number 21 in their run, for reasons unknown they’ve skipped a book.

Rory Black is a pseudonym used by Michael D. George.

The cover art doesn’t illustrate anything that happens in the story. Hale tended to use generic art for the majority of their westerns, something I always thought was a shame as they had hundreds of paintings to choose from. 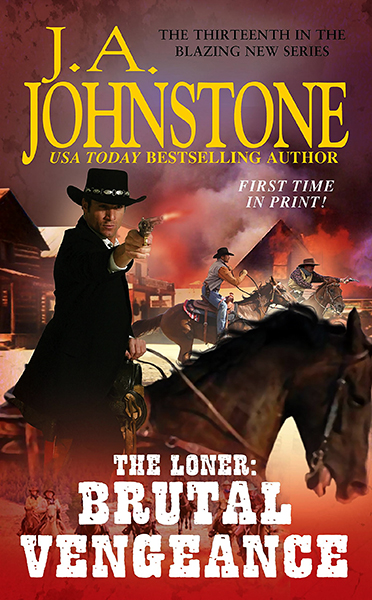 For a posse chasing a murderous band of outlaws, a quiet kid like the Loner with a lightning-fast gun is good company. And when the outlaws turn around and attack the posse, The Loner doesn’t have a choice: he’s now caught up in a running gun battle across West Texas. The Loner knows the men he’s fighting are bad to the bone – led by a merciless killer named Warren Latch. But what about the guys on his side? As men on both sides of the fight bite the dust, the Loner has fewer allies and no way out. That’s when a beautiful bounty hunter appears on the scene – to lead the way into another vendetta, another betrayal, and one final, bloody fight to the death . . .

If it’s all-out action you want, then this book is for you. The author hardly gives his characters chance to draw breath between each bout of gunplay. From a savage robbery that sees the fiery destruction of a town, to the attempts of the outlaws to wipe out the vengeance driven posse, before a bloody final showdown.

The plot is pretty much a chase storyline, as the posse tries to bring down the outlaws before they can reach San Antonio. The Ranger, Asa Culhane, leading the posse fears they will lose the men they are hunting in the crowded town. The posse has troubles within, as not everyone agrees with the Ranger’s decisions and many don’t want the Loner to lead them should something happen to the Culhane. Divisions in the posse could prove deadly.

The author switches between the two side regularly allowing development of characters in both the outlaw gang and posse. The arrival of the beautiful bounty hunter causes more problems, especially for the Loner as he already knows Lace McCall – you can read about their first meeting in the seventh Loner book: The Bounty Killers – and the knowledge that they work well as a team is further strengthened in this tale.

If you like reading stories that feature unusual weapons then this story will fulfil that need for you as the outlaw leader, Warren Latch, uses a matching pair of Mauser C96 machine pistols, guns that don’t turn up that often in westerns.

The closing scene sees the Loner offered an exciting opportunity, but will he take it? I guess I need to read the next book to find out, something I’m very much looking forward to doing as I’ve really enjoyed all the Loner series so far and can’t see any reason why the next one won’t be equal to them in every way.

EASY COMPANY AND THE DOG SOLDIERS 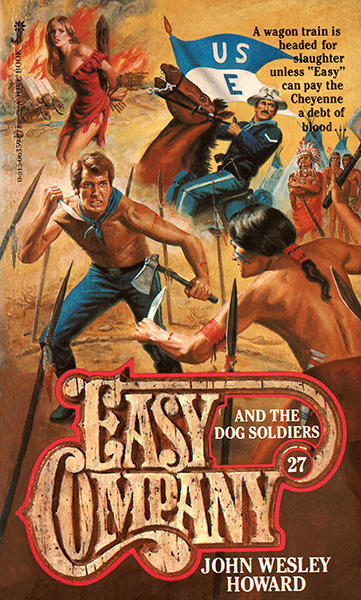 When self-styled preacher Ethan Deal whips his wagon through the gates of Outpost Number Nine, trouble rolls right in behind him. He has the sacred blood of a Cheyenne “Dog Soldier” on his hands, and now the whole tribe is screaming for vengeance.

What “Easy” doesn’t need is the murderous Jellicoe clan wreaking havoc on the tawny plain and a wagon train of westward bound settlers heading right into their clutches.

A rugged test for Lt. Matt Kincaid’s courage and the most unlikely plan ever devised could be “Easy’s” only chance to head off an all-out massacre.

Like the majority of books in this series, this one contains a great mix of interesting characters having to deal with deadly situations mixed in with the everyday running of the Outpost Number Nine. If you’ve read any of the previous books then you’ll find a lot of familiar soldiers and Outpost staff tackling the next set of problems that the army finding themselves facing.

There are plenty of violent confrontations mainly involving the Jellicoe clan, although the soldiers are involved in combat too. The more savage elements of the tale are nicely balanced with humorous situations and comments, mostly revolving around a visit to the Outpost by Captain Conway’s mother-in-law. Mrs Dodgson’s attempts to bring culture to the Outpost provide many laugh-out-loud moments, as do some of the Dog Soldiers who are contraries, braves who do everything backwards.

A lot of the storylines are resolved as you’d expect but that doesn’t mean the book isn’t enjoyable. I appreciated it as much as any other Easy Company tale. I might not place it up there with the very best the series has to offer but I did find it an entertaining read and I look forward to reading another soon. 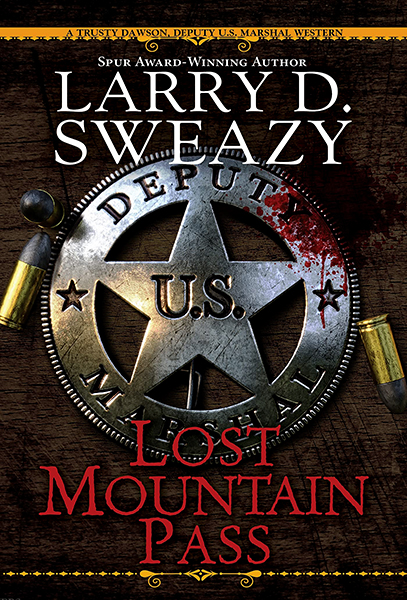 Kosoma, Indian Territory. The outlaw Darby brothers have been sentenced to hang until dead. Witnessing the execution are Amelia Darby, sister of the condemned men, as well as U.S. Deputy Marshal Sam “Trusty” Dawson and Judge Gordon Hadesworth. After justice is served, Trusty hits the trail, escorting the judge – and begrudgingly, Amelia – back to Oklahoma. Ambushed en route, the judge is murdered and Amelia vanishes, leaving Trusty to believe she led them into a trap for revenge.

To find Amelia, Trusty will have to put his faith in Father Michael Darby, a fourth brother who gave up his criminal ways to take up the cloth and collar. Unwilling to let his sister continue to fall to the wicked evil that claimed the rest of his family, Michael joins the hunt for Amelia. But as their journey turns deadlier by the day, Trusty starts to doubt that Michael is truly of the righteous path . . .

As is stated on the copyright page, this book is based on a short story that was published in the anthology The Traditional West under the same title in 2011. I have read that tale and enjoyed it. The opening scenes are the same as in this book, and the theme is generally the same, although it plays out quite differently. Sweazy has also changed some of the character names, not least the lead, although he was still known as Trusty.

Larry D. Sweazy has adapted that earlier tale extremely well. Plot changes and more twisting story threads make for a gripping read. In a much longer story, Sweazy can flesh-out his characters, and his does this well, especially with Trusty Dawson, as there are many flashback scenes to his childhood, his meeting of a special girl and of his time in the army. Alongside Trusty’s past and his present, there is another storyline, that of a scheming rancher who is soon riding a killing trail. Discovering how these three seemingly separate storylines will entwine is what made me keep turning the pages. All I will say, is that there is a possible life-changing shock awaiting Trusty. It is fascinating to witness how Trusty deals with all the problems thrown at him and he is soon dealing with self-doubt, questioning his abilities to do his job and make the right decisions.

Sweazy also includes some real-life characters and the book contains plenty of gunplay and a couple of brutal murders. As the three plot threads develop, Sweazy starts to include information that will give you some idea of how they will end, but there are still a few surprises in store as the story moves into its final scenes, especially the very last one, which offers a possible storyline for the next book. It’s just a shame readers will have to wait such a long time to discover if this will be part of the second book as, according to information at the end of this book, the next title won’t appear until the winter of 2022.