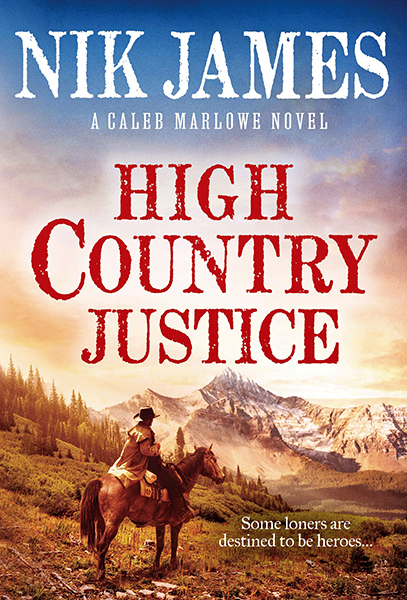 When Doc Burnett, Caleb’s only friend in town, goes missing, his daughter, Sheila, comes seeking Caleb’s help. Newly arrived from the East, she hotly condemns the bloody frontier justice of the rifle and the six-gun.

Murderous road agents have Doc trapped in their mountain hideaway. To free him, Marlowe tracks Doc’s kidnappers through wild, uncharted territory, battling animals and bushwhackers. But when Sheila is captured by the ruthless gunhawks with a score to settle, Marlowe will have to take them down one by one, until no outlaw remains standing.

Nik James is a pseudonym for authors Nikoo and Jim McGoldrick. More well known for their thrillers and British-set historical novels, they’ve now ventured into the world of fictional westerns.

After an opening scene that shows how proficient Marlowe is in the art of killing as he takes down six rustlers, the reader is quickly introduced to the other lead characters, Shelia and the Doc. Burnett has already been kidnapped when we first met him and his situation is dire to say the least. He’s been taken for his medical skills, so the story becomes a race against time, both for Marlowe as he tries to find the Doc and for Burnett to save his patient and his own life.

Nik James often switches between the well-drawn characters, often leaving them in dangerous situations that makes sure the reader will keep turning the pages. There is a lot of mystery surrounding Marlowe, but this is slowly unravelled as the authors reveal some of his background through memories.

There’s plenty of action, tense situations and twists to the plot. Relationships between the lead characters are nicely developed. Early on, the authors throw some questions into the storyline, such as why a band of outlaws have suddenly started killing their victims? There are some surprising revelations about some of the main characters too.

High Country Justice proved to be an entertaining read; one I think all western fans will enjoy. I was left looking forward to reading the next book in the series, Bullets and Silver, that is set to appear at the beginning of 2022. A third book, Silver Trail Christmas, has also been announced. 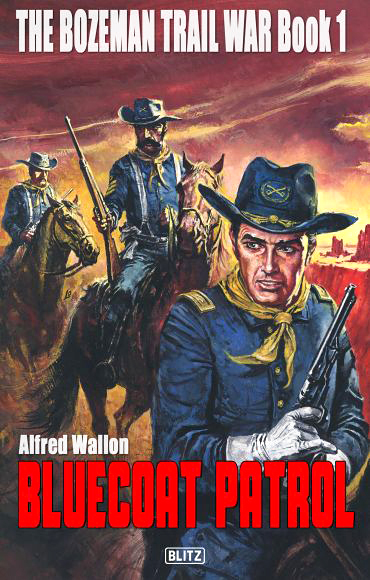 News of the gold discoveries in Montana have spread like wildfire. The Alder Gulch near Virginia City attracts adventurous pioneers, prospectors and scoundrels from all directions.

The shortest way to Montana leads from Laramie along the Bozeman Trail, through the middle of the land of the Sioux and Cheyenne on the Powder River and through the Black Hills. The first bloody clashes have already begun.

When the Oglala chief Red Cloud learns that the soldiers are building a fort to protect the prospectors on their way to Montana, the situation escalates. A trek accompanied by an army patrol is ambushed on their way to Virginia City. The Sioux and Cheyenne want to defend their country against the white invaders by all means. A bloody war will start very soon!

Alfred Wallon is one Germany’s leading western writers. His many books are published in his home country, but now a few have been translated to English and released as ebooks. Bluecoat Patrol is the first in a new series dealing with the resentment the Sioux and Cheyenne felt towards the invasion of white settlers passing through their land. This leads to violent clashes as the U.S. Army tries to protect the pioneers.

The author has certainly done his research and his story sees chapters and scenes headed by the dates that the events he describes happened. Of course, historical fiction such as this include many real people and Wallon does a good job in bringing them to life and we get to witness the views of characters on both sides of the conflict. There is a lot of action as the opposing sides meet in fast and furious skirmishes. A good portion of the story deals with the Battle of the Tongue River. Some of the storylines come to an end, but a number are left open to be continued in the following books of the series.

It would be wrong of me not to mention the translation. This English version is very readable, at times it did wobble a little, but once I got used to it, I found myself enjoying the tale. 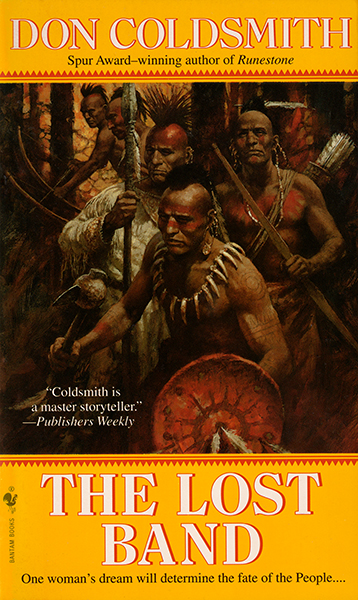 THE SPANISH BIT SAGA
Book 26 of 29 + three special editions
By Don Coldsmith
Cover art by Tom Hall
Bantam, April 2001
For the Forest Band of the People, summer is a peaceful time of hunting and gathering. But when a band of Shaved-heads brutally attack, the People’s women and children are carried off into slavery. Most accept their fate, but one of the captives, the courageous widow White Moon, vows to keep the traditions of the band alive until the day the survivors can be reunited with the People. Her dream will inspire many of her tribe as they struggle to preserve their culture: a young hunter and his loyal wife, a troubled warrior on a vision quest, an aged storyteller, a wily trader – until at last the special child is born who is destined to lead the Forest Band back to its rightful place in the Great Council of the People.
A sweeping story that covers generations, even reaching further back into the past than before the first book in the series began as Don Coldsmith finally reveals what happened to the band that should occupy the empty place at the Council fire.
Coldsmith divides the book into four parts, each following a different person as the survivors of the Forest Band’s ancestors try to keep traditions alive, in secret as they often don’t know who they can trust, especially those originally taken by the Shaved-heads. Even though many want to find the People themselves there are a variety of reasons they cannot do so; the birth of children and not knowing where to find the People being a couple of those problems.
The lives of the four main characters, White Moon, Striker, Stumbling Bear and Story Keeper, are fascinating to read. Each is very different to the others but linked by the desire to keep their bloodline hidden and to be reunited with the People. I always thought Coldsmith was extremely good at character studies and they are as strong in this tale as they are in any other book in this tremendous series. Hope, expectation, wonder, happiness, love, fear, anguish, hate and sadness, mould the lead characters as they grow. As a reader I often found myself sharing their emotions as I was captured by the magic of their decades long quest.
Right at the beginning of the book Coldsmith lets the reader know that the Forest Band will return to the People, and the scenes of amazement when Story Keeper arrives at the Sun Dance and announces who he is captured my imagination immediately and I was hooked. I just had to discover what had happened to the Forest Band and the story proved to be just as good as I hoped it would be.
Posted by Steve M at 11:15 No comments: