No one within fifty miles of Whiskey Crossing, Texas, could match Carp Varner’s skill with a sidearm. No one could match his murderous temper either. But when his half-cocked bid for mayor yielded only one vote in his favour – his own – his fury razed the tiny town to the ground in a blaze of flames and hot lead.

Showing up in Apache Springs to offer his services as a gunsmith, Varner even gets on the good side of Sheriff Cotton Burke. But when Burke learns of Varner’s true nature – and past crimes – he unleashes an inferno of his own to see justice done.

Cotton’s Inferno is the fourth and final book in the Sheriff Cotton Burke series.

Phil Dunlap writes fairly short chapters and these are split into a number scenes. Often switching between the main characters in each of these scenes, as all converge on Apache Springs.

If you’ve read any of the previous books you’ll have already met a number of Apache Springs’ citizens and like before a number of them have leading roles in this one. Then there’s the evil Varner and the youngster, Johnny Monk, tracking Varner from the destroyed town of Whiskey Crossing, aiming to kill him for his horrific deed. Johnny will meet a young girl on his journey and she joins him on his vengeance hunt.

There’s plenty of action and some moments of humour too as the story races to its conclusion that could just see Apache Springs fall to the same fate as Whiskey Crossing and, as the flames begin to devour Apache Springs, it becomes a question of whether Burke can save the town, stop Johnny from being killed and take down Varner at the same time.

Cotton’s Inferno is a traditional western that should be enjoyed by all fans of the genre. On finishing the book I was left feeling disappointed that there aren’t any more in the series. 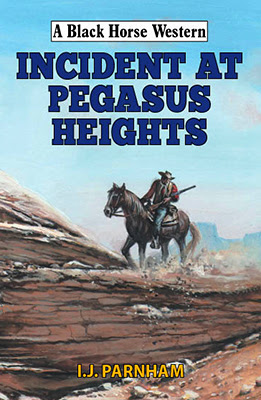 
When fossil-hunter Jim Dragon is on this way to Bear Creek to sell his latest discovery, he goes to the aid of a woman in distress, Elmina Fay. Unfortunately, Pierre Dulaine takes advantage of the situation and steals his fossils.

Jim vows to reclaim his property and Elmina offers to help him, but only if he’ll do something for her. She has heard a tale about the bones of a winged horse being found nearby and she wants Jim to find Pegasus for her.

At first, Jim is sceptical about embarking on such a mission, but before long he discovers that the truth behind the tale is even stranger than he could ever have imagined.

Ian Parnham has created a great set of characters for this story, people who all seem to have secrets, and these along with the mystery of the flying horse make this a hard-to-put-down read.

Even though no-one really seems to know what it is they are trying to find, all sides are determined to discover it first and will do anything to make sure it’s them. As all converge on an outcrop on which sits a wagon which defies all logic as to how it got there – unless a flying horse truly deposited it there – the author has great fun with explanations both true and false and includes plenty of fist fights, before everyone gets involved in a deadly gunfight that will eventually reveal the answers to all the puzzles.

So, once again for me, this author has come up with a very entertaining read that left me hoping one or two of the surviving characters may return another day. In the meantime I’m left looking forward to Ian Parnham’s next book. 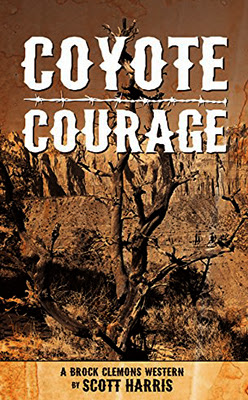 
Brock Clemons rides into the small town of Dry Springs simply looking for a place to grab a cigar and a good night’s sleep. Instead, he finds a town being strangled by a band of hardened outlaws, a young boy named Huck who is bravely facing challenges far beyond his years, and Sophie, a woman of captivating strength and beauty. Brock decides to stay beyond the one night he had planned, but will his intelligence, courage and unmatched skill with a gun be enough to save the town, help Huck and win Sophie’s heart?

When beginning this book you’d be forgiven for thinking the story is being told in the first person, for it isn’t until fifty-five pages in, and the start of chapter ten, that the author switches to the third person, and from then on alternates between the two.

Scott Harris includes a few mystery elements to hook his readers, such as what is Brock Clemons' backstory and what has really happened to Huck’s father.

Clemons also has an interesting pet, a wolf that has a major role to play when its human companion is wounded and in need of protection.

Well-developed characters, vivid action scenes, visual descriptions and a fast-moving plot, all told in an extremely easy to read style, offer everything a western reader could want from this genre right down to a tense and dramatic final showdown in the streets of Dry Springs.

The cover states that Coyote Courage is a Brock Clemons Western, so I can only assume that there will be more to come, and I for one am looking forward to the next in the series. 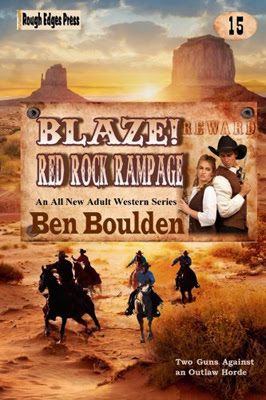 
J.D. and Kate Blaze ride into the settlement of Small Basin, Utah, on the trail of train robbers but soon discover that the town and the surrounding area are ruled by the iron fist of a renegade Mormon patriarch—and he has his eye on two beautiful young women he intends to make unwilling brides. Hired killers, corrupt lawmen, and brutal kidnappers mean a heap of trouble for the Old West's only husband-and-wife gunfighters. Forced to split up, Kate and J.D. have to battle their way back to each other to survive!

This is Ben Boulden’s first entry into this multi-authored series and what a terrific addition it is. Filled with action from the word go the author weaves a twisting plot that sees both J.D. and Kate facing many deadly situations. J.D. in particular when he finds himself captive with little hope of escape, making this part of the story a race against time as Kate attempts to find him.

Ben Boulden’s descriptive writing puts you right there in the thick of the action and his characterization of both good and bad is very well drawn, enabling you to share their emotions.

The Blaze! series is billed as adult reading but Ben Boulden doesn’t include much of this, just the one detailed scene and he only devotes a few paragraphs to this too, meaning it is very easy to miss this section out and enjoy reading the rest of this fast moving tale that ought to please all fans of westerns.

Hopefully this won’t be the only entry into the series from Ben Boulden. 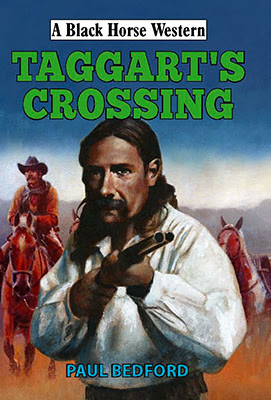 
John Taggart and Jacob Stuckey are Civil War veterans who operate a ferry on the mighty Arkansas River. When two drifters pick on Jacob, Taggart ruthlessly disarms them and sends them on their way vowing revenge. But there is more trouble to come. Russ Decker and his gang steal a fortune in gold ‘Double Eagles’ from a bank in Wichita. Their escape route into the Indian Territories takes them by way of the ferry crossing. With a posse of Pinkerton Agents on their trail, he decides to stop the pursuit by putting John and Jacob out of business…permanently.

Unknown to Decker and his men, a Deputy US Marshal also has his sights on them, but the lawman first has to deliver a particularly unpleasant prisoner to Fort Smith. In addition to all of this, fate decrees that a keelboat full of stolen silver ore will arrive at Taggart’s Crossing just at the right moment to create maximum havoc.

This is Paul Bedford’s eleventh Black Horse Western and what a superb read it is, further strengthening my belief that he is one of the best writers producing books for the BHW line today, perhaps ever.

The story is told at break-neck speed, switching between the many characters regularly as they all converge on the ferry crossing for a showdown between multi-sides none of whom have much of an idea as to the identity of anyone else or why they are shooting at each other.

One thing that quickly becomes apparent is that there is no guarantee as to who will be left alive at the end, if anyone.

Packed with how are they going to get out of that situations, vivid descriptions of both scenes and action – the latter of which is quite brutal at times and should satisfy the most bloodthirsty of readers – this book should be on every western fans to read list.

After finishing this book I’m already eagerly looking forward to Paul Bedford’s next book, A Hell of a Place to Die which is due out in May.