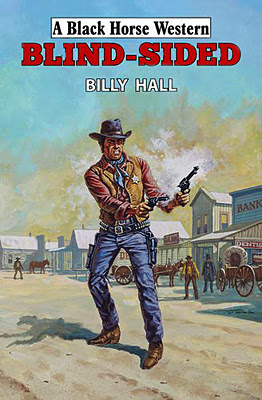 
He could see the tip of the hat brim in the doorway of the balcony across the street. Just over the top of the ridge of the mercantile store’s roof, he caught a glimpse of another hat. That meant at least two men were waiting to kill him in cold blood.

Ike Murdo knows that awaiting him upon his arrival are several people who want him dead. The risks were clear when he chose to interfere with the gang’s plans. He’d had no choice: when the son of the woman he loved was kidnapped, Ike followed his heart.

Now, he must pay the price and confront the gunmen.

He swallowed his fear and called out to the gunfighter. ‘Cadwall! Come out and face me.’

Billy Hall begins his story in an almost gentle fashion as we witness Murdo search for and secure a job that sees him doubling as a cowboy and a farmhand. It’s the latter that provides some fascinating reading as Murdo gets to grips with new methods of ploughing and Hall’s descriptions of this put you right there to witness Murdo’s determination to master these new techniques.

During this time Murdo finds himself become more and more attracted to the ranch’s owner and he bonds with her children. But all the time Hall allows the threat of danger to simmer below the surface and throws a few questions into the mix, such as why Murdo doesn’t carry a belt gun.

Later Murdo sends a telegraph when danger threatens, but who to? Neither characters nor readers are let in on this secret which adds a touch of mystery to the storyline and this turns out to be a great surprise when the author reveals the answer.

As well as fistfights and gunfights there are some excellent confrontations in a court of law that should see off any threat of danger but, of course, they just make things worse and lead to the kidnapping mentioned in the blurb.

The rescue attempt gives birth to a legend which put a huge grin on my face and brings the book to an excellent ending that left me eager to read more of Billy Hall’s work.

Sadly, it has recently been reported that Bill Hallsted (Billy Hall’s full name) passed away in May 2015, so I would like to take this opportunity to offer my condolences to his family and friends and to let them know that for me, and his many fans, Bill will live on in the words of the many westerns he wrote and will continue to bring us pleasure for a long, long time to come. 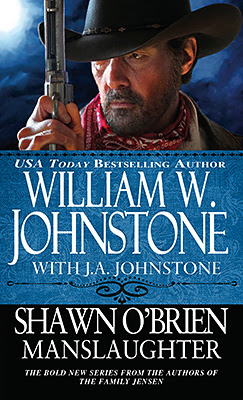 
In Broken Bridle, Wyoming, Jeremiah Purdy, the town’s tinhorn sheriff is a college kid who wants to become governor some day. But outlaw Burt Becker couldn’t care less about anyone else’s ambitions. With Becker holding Broken Bridle in a bloody grip of terror, Purdy sends a desperate cry for help – to Shawn O’Brien, town tamer. Shawn’s mission: ride to Wyoming and pry Broken Bridle loose from Becker’s reign of fear. What Shawn finds is that something even more evil than Becker is haunting Broken Bridle. Now, in a storm of bullets and blood, in a deal with the devil, Shawn O’Brien can only tame this town by entering hell itself…

You want plenty of action? An involving plot that charges forward at the speed of a galloping horse? A storyline full of twists and turns, one of which that could be as equally at home in a horror novel? Demented bad guys with an army of killers? Draw-fighters aplenty? Good-guys escaping their own demons? Fear? Lies? How-they-gonna-get-outta-that situations? Fistfights? Gunfights? Gritty writing that demands your attention? Then this book is a must read!

The author brings together an excellent cast of characters, many of whom I hoped just might, somehow, escape the grip of terror, and high death-toll that plagues Broken Bridle, to perhaps appear in future Johnstone books. Who can forget the twins, assassins who’ve never failed to take out their target? And Becker’s gunman, Caradas? Deputy United States Marshal Brown with his bullish ways? The Chinese? The women? Thomas Clouston riding his massive horse whilst wielding a battle-axe like someone from a Frank Frazetta painting? And the strawmen – I still shudder whilst thinking about them.

Like the previous Shawn O’Brien book, Town Tamer, this delves into the darker side of humanity, where greed is all that matters and life is cheap. Where madness is the driving force and death feeds well. It seems Broken Bridle is destined to become a ghost town and that O’Brien cannot possibly stop this from happening. Does he? I guess you’re going to have to read the book to find out because I can’t answer that here and thus spoil the book for those who are yet to read it. What I will say is that I’m really looking forward to discovering just what horrors await Shawn O’Brien in the third book of the series, Better Off Dead, which I believe is scheduled for release next February. 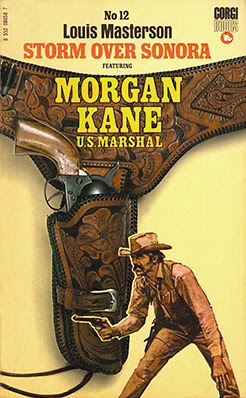 
‘General Garranza has stated officially that the revolt will be crushed if every tree in Sonora has to bear a bandit’….

In Sonora, Mexico, a revolution was taking place. It started in a small way – and then it gathered speed. Villages were plundered and troop trains ambushed. The rebels, it was rumoured, were being supplied with arms smuggled across the border. And this is where Morgan Kane was called in. In a dusty one-horse-town in Arizona, he discovered one of the main sources of the contraband ammunition – in the charge of a wicked, greedy old man….

When we first meet Kane he is suffering, trying to drown the pain that tears at his soul in alcohol. Hurt and anguish that have battered his being during his last two assignments in particular. Louis Masterson seems to enjoy tormenting his hero, but in this story he doesn’t add to Kane’s mental distress – although he does take some physical blows from both friend and foe. This tale is much more of a straight-forward western that is packed with bloody action and sees Kane struggle with where his loyalties lie.

One of Masterson’s strengths is describing landscapes, he paints such vivid imagery with his choice of words and these place the reader right there with his characters, sharing the beauty, heat and harshness of Sonora.

The story contains a couple of neat twists too that will see Kane riding towards certain death without a weapon to defend himself against hopeless odds. Something that will have you wondering how he can possibly emerge from this deadly situation in one piece. Kane’s fear and near panic is written so well you can almost see his sweat oozing from the pages.

The book concludes with a terrific battle as the rebel army launch an attack on a fort, which brings this tale to a violent end. The final lines of the story will definitely have readers wanting to find a copy of the next book in the series to discover just what horrors Kane will have to face next.

Track of the Bear 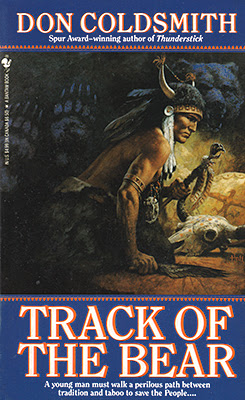 
For as long as anyone can remember, the People have had a sacred Covenant with their brother Bear. Now, without warning, the bond has been shattered as a bear stalks the People on their annual trip to summer council. Fearing the bear is an evil spirit in disguise, Singing Wolf knows he must take matters into his own hands – even if it means breaking the Covenant, wresting power from his father, holy man Walks in the Sun, and alienating his beloved Rain. But as Singing Wolf and Walks in the Sun each struggle to understand the broken Covenant, their crisis foretells an even greater challenge facing the People – both from within and without.

Once again Don Coldsmith’s exceptional ability to write a gripping tale shines through in this story of the struggle to understand spiritual beliefs. The question of why the bear has begun killing the People needs an answer before they can begin to plan how to stop the animal without destroying it and thus giving a death sentence to the creatures’ killer.

Amid the beautiful described landscapes and seasonal change Coldsmith really does capture the frustrations of lack of understanding that twists the soul of Singing Wolf and those he confides in. You’ll share those torments with the People as Coldsmith’s words captivate your imagination, you’ll feel their sorrow as the death count mounts, you’ll find yourself wondering just how this bear, that never shows itself except to those it kills, can possibly be stopped without bringing even greater tragedy down on the People.

Coldsmith solves the problem in an obvious yet unpredictable way that both shocks and surprises. Followers of the series will definitely feel the pain that this conclusion brings to the People, making this book a not to be missed read in the series.

It’s been a while since I read a Spanish Bit novel and this one has left me very eager to read the next in the series as soon as possible.