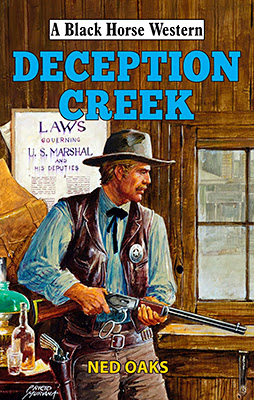 
A masked killer is stalking the small town of Oakridge. Known only as The Phantom, he strikes at night, attacking sleeping couples in their beds, raping and murdering with impunity. Despite the best efforts of the local deputy, he manages to elude capture, and finally former marshal Ed Burton is brought in to assist the investigation.

Burton is an experienced lawman, having solved many murder cases before his retirement, but never before has he hunted a predator as dangerous as this one. Working closely with Deputy Maynard Blayloch, he becomes obsessed with his quarry, and soon they close in on a suspect. But nothing is what it seems, and suddenly Burton finds himself the target of The Phantom.

A note on the back of the book tells us that this tale of terror and justice is based on a true story.

Ned Oaks builds his story extremely well, showing how The Phantom goes from just beating and raping to finally killing his victims. Who is The Phantom? What drives him? Why was there such a long gap between his first attacks and those that Burton finds himself investigating? All this combines to make this a very difficult to put down tale that will keep you reading until the answers are revealed.

Ned Oaks has also had fun with his character names, many of them being pseudonyms for westerns writers such as Tyler Hatch, Hank Kirby, Emerson Dodge and George G. Gilman. All these putting a big grin on my face as I read.

This is the third Ned Oaks western I have read, and like the previous two, I found it to be a very entertaining read that left me looking forward to his next book.