PURSUIT IN THE SUN 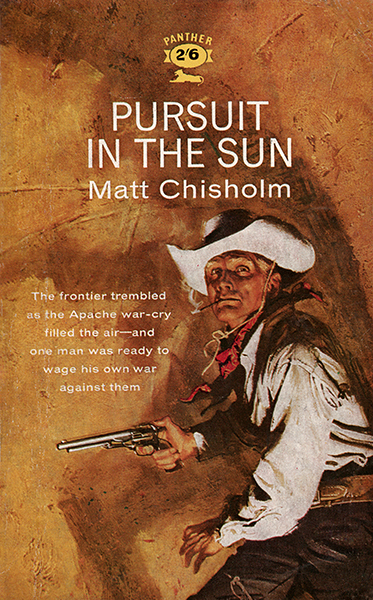 Henry McGladdery Forty, United States Army . . . ending his days after twenty years’ service in a shabby frontier fort on the edge of the south-western desert, tempted to quick promotion by a colonel’s daughter with better looks than morals; tempted to civilian freedom by a wild mustanger’s daughter . . .

Then his thoughts were disturbed by the thunder of the unshod hoofs of Apache ponies, their riders yelling in fury at the soldiers and civilians who barred their way to the riches of the country. Forty knew there was only one way to fight an Apache – fight him alone. So fight him he did . . .

If you like westerns filled with gunfights then this is the book for you. In fact, the final third of the story is pretty much one long, frantic chase and gun battle between the Apaches and Forty’s small band of men who are determined to bring an end to Correoso’s raids. A lot of the fights involve horses, as the Apaches attempt to steal fresh mounts and Forty tries to stop them.

Although long-time readers of westerns won’t find anything new in this book, Matt Chisholm always keeps the story interesting and gripping and immediately has you wondering what’s going on as his tale begins in the midst of a dangerous situation. His heroic figures will have you urging them on as they battle superior odds. Chisholm’s taut plotting is often laced with mild humour and you can never be sure of just who will be alive by the end.

Matt Chisholm is the most well-known pseudonym used by Peter Watts and he’s always been one of my favourite British western authors, and even though this book isn’t one of this best as it was a little predictable, it was still very entertaining and left me eager to read more of his work. 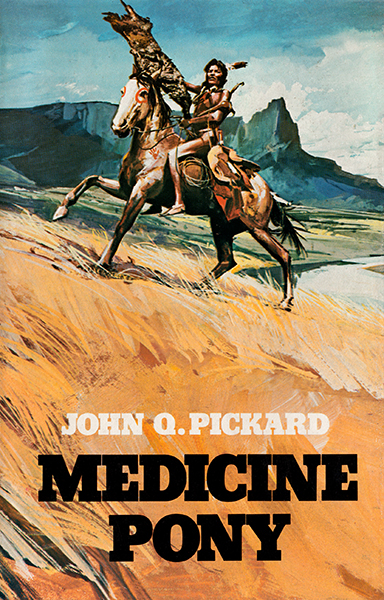 By John Q. Pickard
Cover art by Michael Codd
Herbert Jenkins, 1975
Originally published by Ward Lock and Company, 1964
The Medicine Pony is a wonderful golden stud owned by the brutal Comanche chief, Black Mouth. ‘Sun Bird’, as it is known far and wide, is held sacred by the Indians – their talisman and magic shield against loss and defeat.
To help the Confederate cause, Bart Gannon, a notorious gunman in those early Civil War days, holds up a gold consignment from the Golconda Syndicate in the North and makes his way through Indian territory to deliver the valuable metal to the hard-up forces in the South. Attacked by the Comanches, he kills Black Mouth, caches the gold and escapes on Sun Bird, taking with him to safety Jane Burnett, whose father has been killed by the Indians. But at Fort Jay there are outlaws after both the gold and Sun Bird . . .
Philip Antony John Borg wrote over 60 westerns under the names Jack Borg, Phil Bexar and John Q. Pickard. This is the first time I’ve read any of his books.
Borg’s hard-boiled prose makes for a fun read, his descriptions painting visual images of time, place and of the exciting action scenes, of which there are many. The plot moves forward swiftly as Gannon tries to outwit Comanches, outlaws and Union troops. The story contains some dramatic moments, the best to my mind being when Gannon comes face to face with some Comanches in the midst of a thunder and lightning storm.
Although the tale reads pretty much as you’d expect, it does contain a few surprises and has a neat twist that wrenches Gannon’s soul near the end.
Medicine Pony was an enjoyable read that will have me keeping an eye-out for more of Borg’s work.
Posted by Steve M at 17:47 No comments: 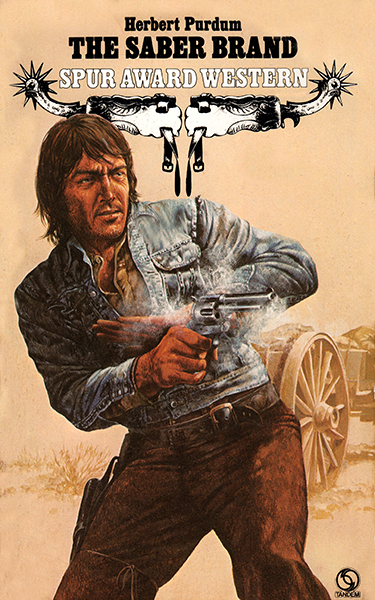 Colonel Belknap reckoned he owned Concho Basin and every man, woman and child who lived there – especially the women . . .

When the Niles brothers rode into Concho, they collided head-on with Belknap’s outfit. That was when John Niles forgot he was a preacher and turned to more forceful methods of converting the wicked. Niles had plenty of guts and nerves like chilled steel, and he needed them when he tangled with Belknap’s Saber bunch.

Even though the plot is similar to many other westerns, the rich man who rules the town and surrounding land with an iron fist and a small army of gunmen, Purdum’s storytelling keeps it fresh and exciting.

Told in the first person through Frank Niles, the tale is laced with humorous observations about everything that happens. There are many comic situations too, which give the tale a light-hearted tone, without turning it into a full-blown comedy western.

Frank is a wonderful character, a frustrated man, a man not lacking in bravery, who is constantly being admonished by his brother for his use of bad language and for wanting to kill their enemies. His brother John, being a circuit-riding preacher, would rather resolve things peacefully, but isn’t opposed to using force when he has to.

Purdum does write a lot of speech in slang and spells words how his characters say them, so some of it took a bit of careful reading to understand. Scottish, Irish and cowboy are all in the mix, but it didn’t take long for me to get used to, and I found it added a nice flavour to the story.

There are many well described action scenes as the Niles brothers attempt to stop Belknap from forcing a woman to marry him. Belknap has the town lawman in his pocket too. It seems to the best way to rid Concho of these men is to hold an election and remove the sheriff, but this doesn’t quite go to plan, although it does evolve into a very different candidate stepping forward who the townsfolk are right behind, especially the ladies of the town. The final showdown is dramatic, fun, and uses children to bring about the downfall of Belknap.

I really enjoyed The Saber Brand, a title maybe only used in the UK, its American title being My Brother John. It seems Herbert R. Purdum only wrote one other western, A Hero for Henry, which was published in 1968. Purdum also wrote scripts for many TV shows, including Death Valley Days and Broken Arrow.

THE BLOOD OF INNOCENTS 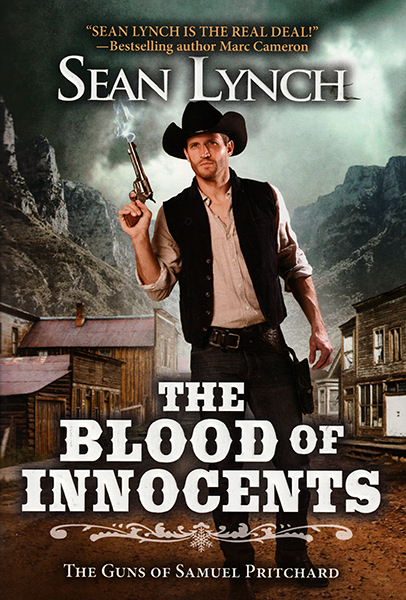 THE GUNS OF SAMUEL PRITCHARD 3
By Sean Lynch
Pinnacle, September 2021

As both a former Confederate guerrilla and Texas Ranger, and now a U.S. Marshal, no one knows the dangers of the frontier and cowtowns like Marshal Samuel Pritchard. A couple of wagon trains traveling the Oregon Trail have vanished and Pritchard’s got miles of bad road across hostile territory to investigate. But he must also reckon with a price on his head. Bounty hunter Captain Laird Bonner is the greatest manhunter throughout the west – and he’s as ruthless as he’s relentless in pursuing his prey.

Then the trail for both Pritchard and Bonner ends in an Idaho mining town named Whiskey Falls. Ruled by a man who earned his stripes in Andersonville, the town is a literal hell for everyone who lives there, slaying and dying to satiate their captor’s lustful greed. To escape, Pritchard and Bonner must declare an uneasy truce and take on an army of gunmen.

Nearly two years after the release of the second book in the series, the third finally appears (with a fourth due in November) and it easily stands as strong as the first two.

Although the opening scenes take place in Atherton, Pritchard’s home town that he’s town marshal of, it isn’t long before Pritchard leaves it behind to investigate the missing wagon trains that seem to have vanished into thin air without leaving any kind of trace as to what happened to them. Joining up with a wagon train of travellers made up of Quakers leads to some lively exchanges between the Marshal and those he finds himself protecting from outlaws and Indians. The Quakers refuse to fight, believing God will protect them, a belief Pritchard just doesn’t agree with.

As expected, the fate that befell the missing wagon train strikes the Quakers in a savage battle that results in a very high number of killings. This is also where Pritchard’s path crosses with Bonner, yet at this point he doesn’t know that Bonner is a bounty hunter after his hide.

There is plenty of violent action throughout the tale, but the desperate fight for survival mentioned in the previous paragraph is nothing compared to what is to come. If you like stories with colossal death tolls then this is the book for you as Pritchard and his companions face massive odds.

As the survivors escape the horrors that descended on the wagon trains, there is still the matter of Pritchard verses Bonner to resolve and one or two other loose ends to tie up. Sean Lynch does all of this neatly in an almost underplayed way after all the brutally violent scenes that came before.

The Blood of Innocents is a very entertaining action-packed read that should satisfy all western readers.