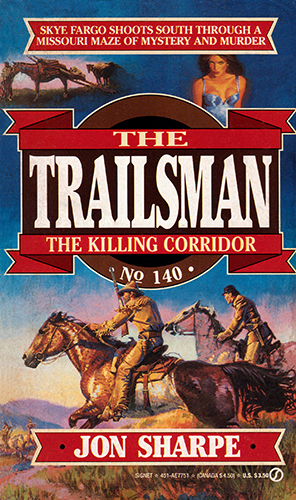 The Pawnee were running amok from Kansas down to Oklahoma, and the only thing the U.S. Army was stopping was their arrow heads. That’s why General Eakins turned to Skye Fargo for help. Skye liked Eakins’ hotblooded daughter Annabel far better than her cold-fish father, but still took the job and headed south to a Missouri swept by a firestorm of savage fury. What he found was a woman doing a man’s dangerous job, and a mystery that went beyond Indian uprisings to unspeakable white treachery, as he followed a trail of greed and gore with his country’s future at stake and his life on the line at every false lead, wrong turn, and dead end….

After opening scenes that result in Fargo being troubled by a statement Eakins makes regarding his daughter, the author piles on the problems facing The Trailsman. Why are the Pawnee making half-hearted attacks on the soldiers and how is gold being smuggled to finance the confederate states as the threat of Civil War grows? Whilst trying to solve these mysteries, Fargo finds himself in a number of fights, some of his own making as he attempts to force those he suspects to reveal themselves.

The Trailsman is an adult western series so the book does contain some graphic sex, but after the first explicit scene these acts are dealt with quickly so they don’t interrupt the story's main plot too much.

The book is easy to read and the pacing is superb, never letting up in the action department, each chapter have at least one round of gunplay or fist-fights. Going by the length of the chapters, I’d hazard a guess at this being written by series originator Jon Messmann, but I wouldn’t like to say for sure. One thing I did notice, and that is that Fargo doesn’t carry an Arkansas Toothpick in this book, instead he has a throwing knife concealed in his boot. Perhaps the toothpick was introduced later in the series?

The plot isn’t particularly complicated and offered little in the way of surprises and how the gold was being smuggled was easy to work out. Having said that these points didn’t lessen my enjoyment of this book and I’d recommend it to all fans of the Trailsman series.

GET OUT OF TOWN 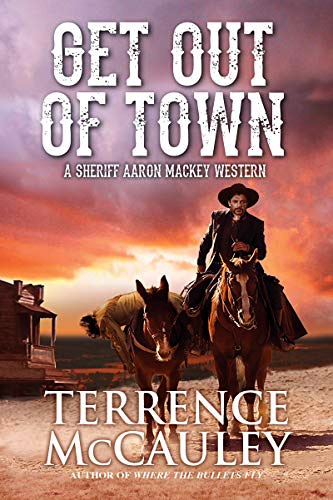 Dover Station, Montana, is no place for a lawman. A sheriff’s badge ain’t worth a nickel here – unless you’ve got the bullets to back it up . . .

When he signed up to be sheriff of this dirty little boomtown, Aaron Mackey knew he was asking for trouble. Once, when Mackey was the U.S. marshal for the whole Montana Territory, he swore no job could get any harder. But that was before he took down a few of the bank-robbing Hancocks – and incurred the wrath of the gang’s maniacal matriarch, Mad Nellie Hancock.

And the was before every avenging outlaw and hired henchmen came crawling out of the woodwork to kill him – in the meanest, bloodiest showdown the town had ever seen . . .

Aaron Mackey knows you can’t fight city hall. But you can flush out every kill-crazy outlaw, greedy grifter, and boomtown rat – then exterminate with extreme prejudice . . .

Murder, political wrangling, outlaws, lawmen, intrigue, opium, gunfights, tense standoffs, false accusations, this story has them all and much more.

Terrence McCauley brings back all those characters who survived the previous books and adds a few new ones to spice up this excellent mix in a twisting plot that proves to be a gripping read. Mackey’s new role as a U.S. Marshal gives him more ground to cover but his desire to take on the people he sees as ruining Dover Station also puts him at odds with his new employers.

The power hungry Grant is the man Mackey is determined to bring down but the crooked mayor always seems one step ahead of the lawman. Grant also has the Hancock clan working for him and they cause a lot of trouble for Mackey.

As the plotlines entwine so the tension mounts. Will Mackey find the proof he needs to bring down Grant once and for all? As the story races towards the end it seems that Mackey is doomed to fail in his mission.

Terrence McCauley has once again come up with a page-turner, a book that is very hard to put down. McCauley’s pacing is superb, his descriptions vivid and his plot ensnares the reader from the opening page.

Get Out of Town is another terrific entry in this first-class series and I’m now counting down the days until the fourth book, Dark Sunrise, hits the shelves in November. 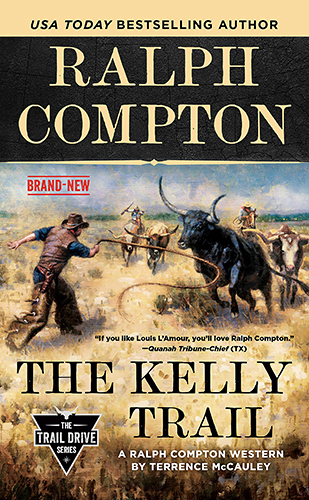 Over the past twenty years, William “Bull” Kelly has acquired a reputation as one of the best ramrods in Texas. He has led legendary cattle drives to almost every railhead in the country. Most impressive of all, he once drove his herd all the way up to Montana. But after years of working for other people, he has decided to run cattle on his own with his five sons.

Everything starts off fine, but when a group of cattle thieves tries to stampede the herd, the Kelly family is decimated. The rustlers quickly find out that Kelly isn’t called “Bull” because he insists on riding at the head of the herd. He got his name from the bullwhip he keeps coiled on his belt. He can make the whip sing, but against the gang of desperadoes, he’ll need every ounce of his skill if he hopes to get out alive.

Although this book is based around a trail drive, the actual difficulties of moving a large herd doesn’t have a big part to play in the story, it’s just the method of bringing a great set of characters together in a series of violent clashes that sees both sides wanting revenge for different reasons.

William “Bull” Kelly is a hard man. A man who doesn’t take sass from anyone, including his sons. A man who will do anything to achieve his aims. He also has a habit of looking to the sky to talk to his long dead wife which provides some amusement to what is essential a brutal story.

Having Kelly use a bullwhip instead of a gun (although he will use the latter if it’s the only option) makes Kelly standout from many other western heroes we usually read about. There is a cinematic feel to the scene where Kelly with just his whip has a standoff against eleven armed riders that was one of the highlights of this book for me.

Violence is graphic in its description as is its aftermath, especially those who have felt the lash and lived to suffer from their wounds as infection sets in, which, in a couple of cases, sees men slip into fever and become driven by insanity.

The loss of Kelly’s sons sees him slip into some kind of madness too that can only be satisfied by killing those responsible, no matter if it means riding alone into a confrontation with superior odds that he cannot hope to live through. The dark tone of the story at this point surely had me wonder whether Kelly would be alive at the end of this gripping tale.

This is Terrence McCauley’s third western and on the strength of this book, and the previous two, he has firmly cemented himself into my top western writers list. Definitely an author not to be missed. 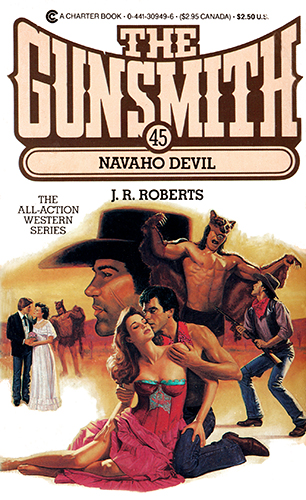 Now, instead of attending a wedding, the Gunsmith is tracking down a chindi – the Navaho version of a werewolf. But this chindi is a man, cunning, savage, deadly, but still a man. Clint must find the chindi and destroy him – if the wolf witch doesn’t find him first . . .

It’s been a while since I read a Gunsmith book and the portrayal of Clint Adams shows him as a much more aggressive, no-nonsense type of man than I remember. Not that that’s a bad thing, it’s just different and this harder personality fits the brutality of this storyline perfectly.

Navaho legend, ancient elders, savage deaths, sensuous women and a determined Gunsmith make for an enthralling mix. Add in the mystery of the Chindi’s identity and questions about who is digging holes, and why, in the ground of the property owned by the newly dead bride and groom and you have a guaranteed page-turner.

Bigotry is also a strong theme throughout this tale. Twisted words adding their own blend of harshness and confrontations as Adams and the Navaho lawman clash on methods and beliefs.

There’s plenty of fast violent action as the Chindi tears its victims apart and Adams gets on the wrong end of the beasts claws a couple of times. There’s also a vicious surprise waiting that leads to betrayal and more deaths. The very end adds a touch of supernatural to the closing scene that is left to the reader to decide what the truth is.

The Gunsmith is an adult western series so this story does contain some explicit sex scenes but they don’t take up much book.

Like all the Gunsmith books I’ve read this one proved to be a fun read that kept me entertained throughout. 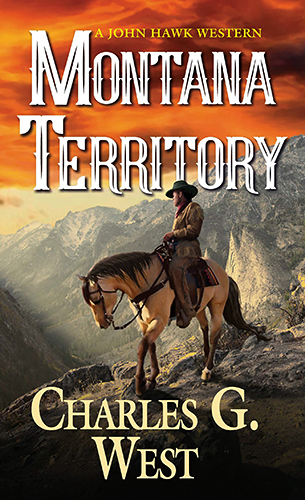 JOHN HAWK 3
By Charles G. West
Pinnacle, August 2020
Raised among the Blackfoot, John Hawk is a valuable asset to the US Army. As a military scout at Fort Ellis, he is able to cross the line between two worlds – and help keep the peace. But when he disobeys a direct order from his commander, Hawk is immediately dismissed from his post. That was the army’s first mistake.
The second was losing track of a small mule train en route to Helena. At the request of his former lieutenant, Hawk leaves his cabin on the Boulder River to help find the missing party. The mule train, it appears, was ambushed by a savage gang of outlaws. Most of the travelers were murdered. Only a few survived to tell the tale. And now it’s up to Hawk to stalk the killers across the lawless Montana territory – alone. No Backup. No calvary. No mercy . . .
It’s been over two years since the last John Hawk western was published, and now we have the third. Was the wait worth it? For me, it definitely was.
Charles G. West has once again written a gripping story that has as its main theme a manhunt. To start with Hawk is reluctant to pursue five killers alone, would prefer to have the backing of a calvary troop, but events he can’t control find him having to continue the hunt unaided. Along the way, Hawk meets a variety of characters that both hinder and aid him in his quest to track the outlaws down.
There’s one particularly tense scene where Hawk meets David Booth, the leader of the outlaws, unknowingly and that was just one of the highlights of this fast-moving tale. A character named Frog made a lasting impression too.
Eventually, all trails lead to Helena and a number of people from the earlier books make an appearance and have major parts to play in how the story concludes.
I’ve yet to read a book by Charles G. West that I haven’t enjoyed and this is another one to add to that list. Now, I just have to hope we don’t have to wait another two years or so before another John Hawk western appears.
Posted by Steve M at 18:03 3 comments: