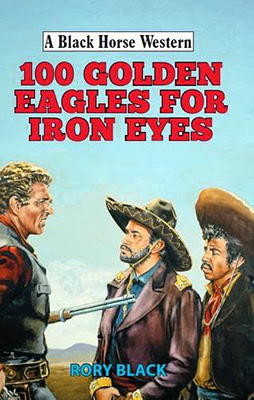 
Bounty hunter Iron Eyes is heading south to Mexico in search of outlaws Bodine and Walters, but is himself being hunted down by his erstwhile sweetheart Squirrel Sally. Then Iron Eyes learns that Sally has been kidnapped by landowner Don Jose Fernandez, and rushes to her aid. But Sally, Iron Eyes and the outlaws are all just pawns in a much larger game, with an enemy more deadly than they can imagine, and Iron Eyes has to use all his courage and skill to survive.

The 26th book in the Iron Eyes series offers everything long time readers of these books would hope for, a fast pace, plenty of violent action, and one or two twists to the plot.

As we have discovered in the past, we once again find out what the only thing is that Iron Eyes fears, yeap women, particularly Squirrel Sally and her devotion to him and her desire to be his woman. No matter how much he tries to lose her she somehow manages to trail him wherever he goes, which scares the hell out of him.

We also find out something else about Iron Eyes, that perhaps he does have a heart, some kinda feelings, that see him not just gunning down Don Jose Fernandez for kidnapping Sally when they first meet but see a plea reach into his blackened soul – and that is all I can reveal about this part of the story so as not to spoil it for those intending to read it.

There is also a neat twist right at the end that could see a turnaround at the beginning of the next book, and again I can’t say what that is here.

What I can say is that for fans of Iron Eyes then make sure you read this book, and for those who have ever never read about this deadly bounty hunter then this is as good a place as any to start and I’m sure it will have you looking for the previous novels. Me? I’m already looking forward to the next book in the series.