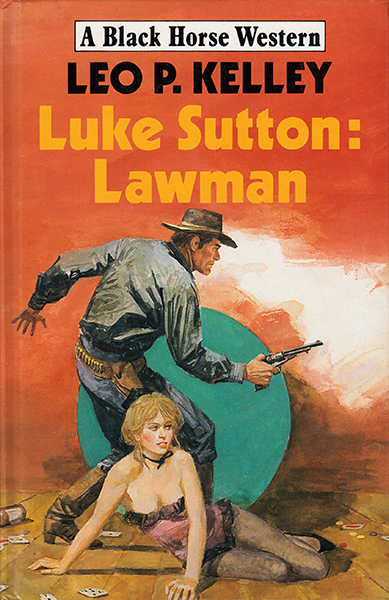 Luke Sutton faces a tough job when he is hired by lawyer William Smythe to find three eyewitnesses to a murder. All of them – Dennis Rutledge, Hank Tully, and Etta Spode – have already testified that Jimmy Lee Cranston committed the killing. Jimmy swears he’s innocent, and it is up to Luke to save him by finding out what the witnesses really saw.

For a man like Luke, who makes his living tracking down people who don’t want to be found, finding a runaway husband, a slippery card shark, and a very popular dance hall girl should be no more than a few days’ work. The problem is keeping them alive after he finds them.

It seems someone else is just as interested in their whereabouts. Someone who’s determined that Rutledge, Tully and Spode stick to their original stories – right to the grave!

Lawman is the eighth book of a nine-book series. It’s certainly the first book I’ve read by Leo P. Kelley that I know of. This could easily be a stand-alone novel as there is very little mention of Sutton’s history and you certainly don’t need to have read any of the earlier books to enjoy this one.

The story starts with a scene that outlines the type of man Sutton is and features a lengthy fist-fight that lands Sutton the job of tracking down the three missing witnesses. Sutton is also given a lawman’s badge to make his hunt legal.

Sutton finds each of the three one by one, but the first two are killed before they can tell him the truth. Will the third live long enough to reveal what really happened and the identity of the real killer? The answers are kept secret until the final gunfight that includes a neat twist to the ending.

There was never any doubt that Sutton would find the witnesses and save Cranston from the hangman’s noose. Sutton solved everything with ease and never had much opposition in completing his mission. The book was a quick read that proved entertaining enough and someday I’ll probably read the other Sutton book I have. 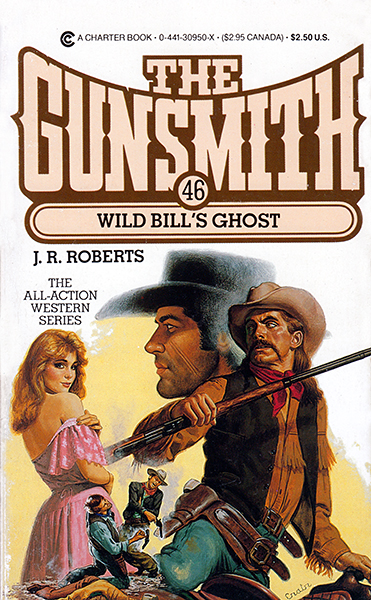 THE GUNSMITH 46
By J.R. Roberts
Charter Books, November 1985
The rumours are flying in Leadville – Hickok is still alive! The way the story goes, somebody else, and not Wild Bill, was killed by Jack McCall in Deadwood.
Clint Adams isn’t one to put much in rumours…but he’s never actually seen Bill’s body and he can’t swear that Hickok is dead. Besides, the Gunsmith and Wild Bill were great friends and if there’s a chance that Hickok is alive, it’s worth the trip down to Mexico to find out. Will the Gunsmith find Wild Bill alive, will he find an imposter – or will he find Wild Bill’s ghost?
This fast paced tale sees Clint Adams become involved in a Mexican revolution, or at least a planned uprising. The story goes that Wild Bill has been hired as a mercenary by the revolutionaries. Turns out those plotting to overthrow the Government are nothing more than bandits, but this doesn’t stop Adams making it known his gun is for hire too as a way to joining the mercenaries and discovering whether it really is Bill or not.
There’s a great selection of well-drawn characters for Adams to deal with. Gunrunners, bandits, Federal troops and an assortment of other toughs. Wild Bill isn’t the only real person that features in this tale, Luke Short has a part to play at the beginning. Then there’s the women, and there’s plenty of them in this story, all eager to jump into bed with The Gunsmith. As this is an adult western series the sex scenes are explicit.
The story builds well to its final showdown that involves all the different groups of people during which Adams discovers the truth about whether Wild Bill is alive, is an imposter or a ghost. Of course, I can’t answer that here, but I will say anyone reading this book is sure to have fun finding out. 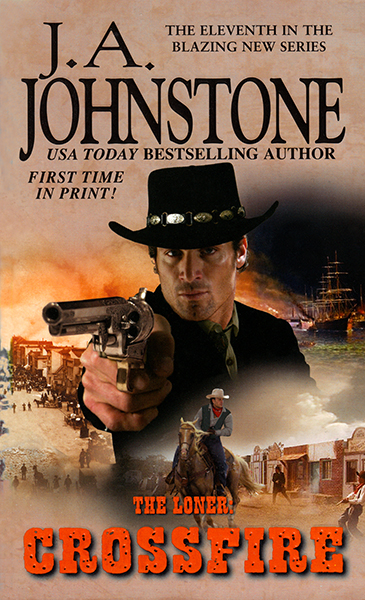 Conrad Browning is The Loner, a man on a mission, crossing the country – and crossing a lot of bad men – to rescue his kidnapped young twins. The trail has led him all the way to San Francisco’s perilous red light-district, where a crime lord is the proud father of newly adopted twins. The Loner knows his children when he sees them. But they’re hostage to a brutal, violent mob feud. Then, just when he needs it most, The Loner is no longer alone: he is joined by his own father, Frank Morgan – the most notorious gunman in the West.

A family’s pain. A woman’s betrayal. A city exploding in violence… The Loner has come to the right place to save his children. But will they get out of Frisco alive?

It was at the end of book seven that The Loner found out he was the father of twins, and all the following books have featured Conrad’s search for them. Now that search comes to an end.

During this tale we witness Conrad let his heart rule his head. Driven by anger he endangers himself and those helping him. All through his hunt for his children there have been attempts on his life and these continue in this story. There’s a lot of action involving Tongs and criminals. Conrad is shanghaied which leads to a desperate escape bid from a ship. People get used so others may gain, this includes The Loner.

This is an excellent story that pulls you in, makes you share the anguish, the hatred and pain of The Loner. He, and his father, certainly take some punishment before the terrific, twist ending.

Top class entertainment that left me looking forward to reading the next book in the series.

Just in case anyone doesn’t know, Frank Morgan stars in his own 23 book series; The Last Gunfighter put out under the William W. Johnstone name and both Frank and Conrad have appeared in another William W. Johnston book that was published in 2018; The Morgans.

THE HORSEMEN
By Gary McCarthy

They were bound not only by blood, but by their love of horses…and together, they rode the West in search of freedom…

This series ran from June 1992 to August 1994 and were published by The Berkley Publishing Group as part of their Diamond line. 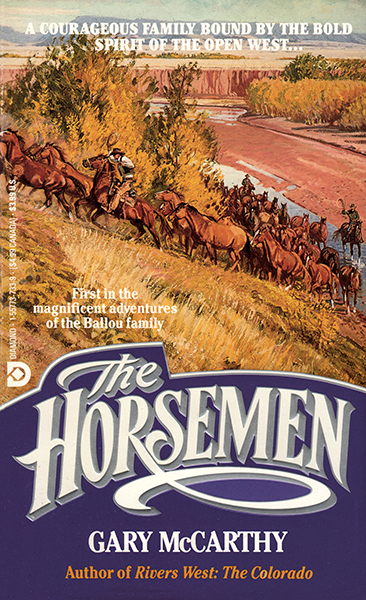 The Ballou’s were the finest horsemen in the South, a Tennessee family famous for the training and breeding of glorious thoroughbreds. When the Civil War devasted their home and their lives, they headed West – into the heart of Indian Territory. As horsemen, they triumphed. As a family, they endured. But as pioneers in a new land, they faced unimaginable hardship, danger, and ruthless enemies… 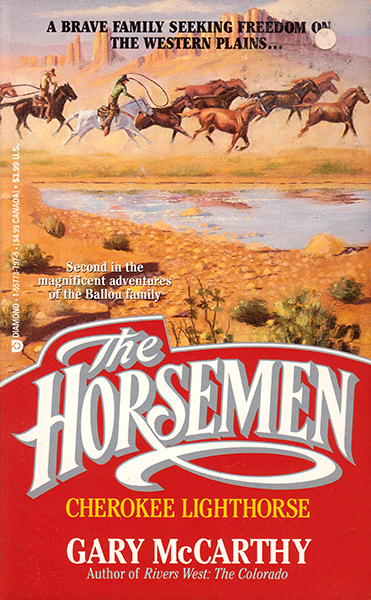 Haunted by the blood and bitterness of the Civil War, Houston Ballou left Tennessee on the proud stallion High Fire, followed by his brother, his sister, and the last four mares from the Ballou farm – one of them heavy with foal. But there were deserters wandering the roads who would kill for valuable horseflesh – and others who would kill a man just for being Southern… 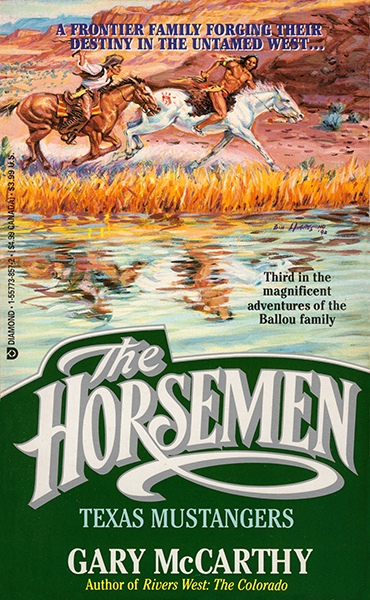 In the wake of tragedy, the surviving members of the Ballou family sought a new beginning on the Texas frontier. There, the Comanches shared their love and respect for horses – training the wild mustangs that ran free across the plains. And there, a tribe of savage hunters called the Kiowa offered a challenge to any people fearless enough – and foolish enough – to cross their path… 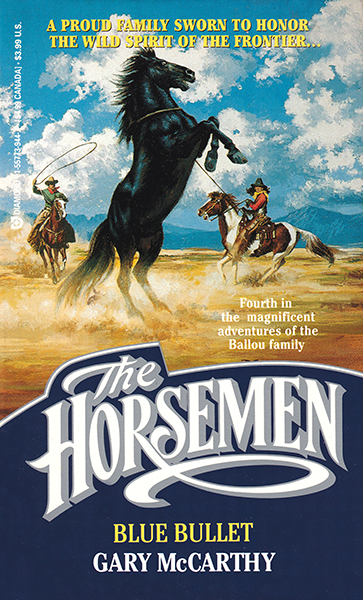 Ruff Ballou and his sister Dixie journeyed west with trouble at their heels. But luck is on their side in Rum River, New Mexico, where they race one of their champion thoroughbreds to victory. Now a rich man’s greed pits their good fortune against Ruff’s life – and they must take up a money-making challenge to capture Blue Bullet, the legendary stallion that no man has yet tamed. But their worst enemy is time – as they race to save the lone fury from savage killers who’ll bring in their bounty – dead or alive… 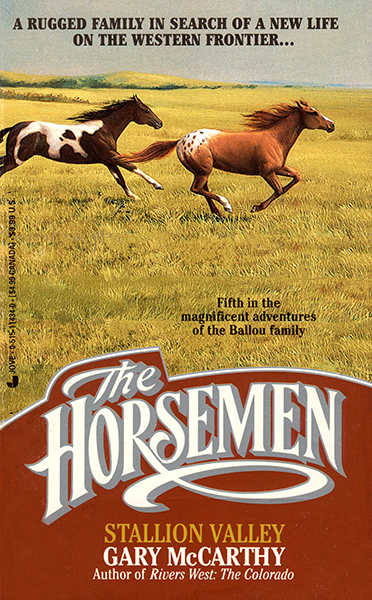 They had been driven from the South, trying to save the horses it had taken their father a lifetime to breed. Now Ruff Ballou and his sister Dixie are on their way to Denver to make a new life…but when they are confronted by a lawman in the town of Rio Paso, the two find themselves embroiled in a search for a murderous outlaw. The Rio Grande Valley may be their home for now…as they struggle to build a new dynasty with their proud thoroughbred – and try desperately to hold on to all they have left…
Posted by Steve M at 17:38 No comments:

RIDE THE HAMMER DOWN 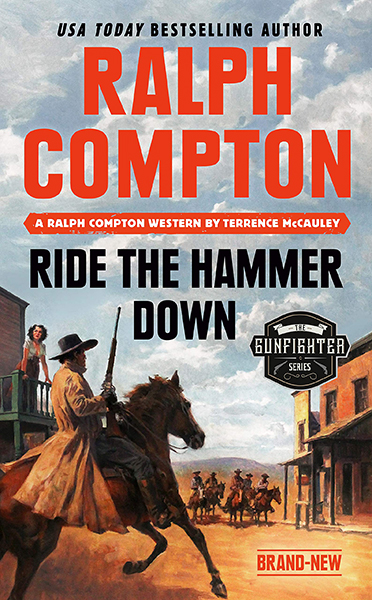 Marshal John Beck was the law in the dangerous town of Mother Lode, Arizona. On his own, he’d managed to keep bandits, rustlers, and desperadoes at bay. It was a tough job for one man to handle, but he made it work…until the day Bram Hogan and his Brickhouse Gang got the drop on the lawman.

They beat Beck to within an inch of his life and dropped him in the desert, where nothing but a slow, painful death awaited him. But the hand underestimated Beck. At his lowest point, he found a way to survive. Now he’s coming back, and anyone who stands against him is going to ride the hammer down to the grave.

From its brutal opening scenes this booked proved to be a gripping read. Terence McCauley’s gritty storyline is filled with engaging characters, some that will have you urging them on, hoping they survive, and others you’ll be wanting to meet a vicious demise. Amidst all the ferocity, the author finds time to add a little romance as love is born from violence, but will Beck survive to enjoy this new found relationship? Throughout the tale you can never be sure if Beck will be alive at the end, or any of the other characters for that matter.

Descriptions are excellent, especially those telling of Beck’s struggle to survive in the desert. You’ll share his desperation, his spiral into madness. Later his elation that becomes fear as he believes he brings death to those who get near him. During the final savage shootout, you’ll feel the aches of his battered body, his weariness and determination to let nothing stop him from killing those who wronged him.

I certainly wondered how this book would end, and at no time did I predict the final scene that provided a fitting close to this tremendous tale.

If you’ve not read anything by Terence McCauley yet, then I’ll suggest this book as the perfect place to start.