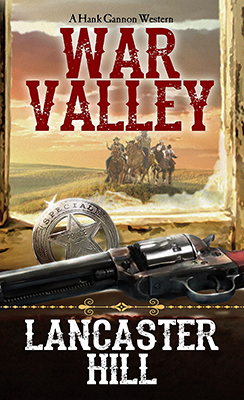 
Hank Gannon grew up on a Florida plantation. He fought alongside his brothers-in-arms in the Civil War. Then he joined the Texas Special Police to help build a more peaceful union – and a future for his beloved Constance. That was the plan. But when a prisoner dies in his custody, Gannon is forced to leave Austin and head into Comanche territory. Alone but undaunted, he meets Roving Wolf- who has just slain a former soldier from his unit. Gannon can’t let the killing go unpunished. Even here, in this godforsaken valley, the law must be upheld…

On the one side is a bloodthirsty war party of Indians, heading for the white man’s capital. On the other side is a makeshift army of Texas Special Police and the Texas State Guard, ready to meet the threat head-on. In the middle are Hank Gannon and Roving Wolf, waging their own blood feud. Two men trapped in a war. Fighting to survive their mutual hate. Killing to get out alive…

Lancaster Hill is a pseudonym for Jeff Rovin, an author known for his Tom Clancy: Op-Center series, and this is his first western.

The author’s writing style is extremely readable and includes some great, tense, life or death scenes.  Battles, be they between two sides or individuals, are described well, and are quite brutal at times and the author isn’t above killing off some main characters, which came as a welcome surprise, as is what happens to Constance, and how this is dealt with by her and Gannon and those who know her. Relationships between friend and foe are equally well-crafted and the author did have me caring what happened to some of them.

Gannon gets kicked out of the Texas Special Police due to possible political problems centered around racial unrest, even though it is entirely unjustified. This, of course, creates tension between Gannon and his now ex-employer, Captain Keel. Racial prejudice is a theme this tale often touches on and at times slowed the story down too much for me, as did the regular flashbacks that explained Gannon’s character (and others) that repeatedly interrupted the tale just as some deadly action was about to erupt. Having said that, the rest of the story was strong enough to keep me eagerly turning the pages.

War Valley is billed as being the first in a powerful new series, and yes it has some hard-hitting storylines, but will there be another Hank Gannon western? The Epilogue seems to imply that this is a stand-alone tale but I’m sure it would be possible to bring out further books featuring Gannon and I for one would look forward to reading them.