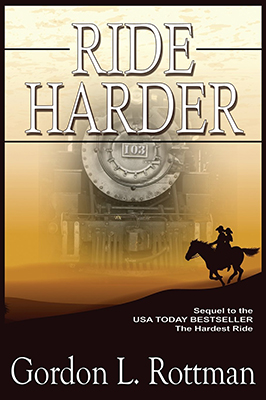 
Cowpuncher Bud Eugen and his resourceful fiancée Marta confront all kinds of dangers in late 1880’s Texas, both old and newfangled. When the seed money for Bud and Marta’s ranch is stolen from a local bank out of its Yankee-made safe, along with an Army arms shipment, Bud and Marta go back to Mexico to secure their future and that of Texas itself, come hell, high water, or steam-powered locomotives.

This is the second book in what has now become known as The Ride trilogy. I read the first book, The Hardest Ride, some time ago and really enjoyed it. That book also won the 2014 Peacemaker Award for best western novel. Finding out that Gordon had published a sequel to that book put it on my must read list.

The story is told in the first person through Bud and I soon found myself becoming involved in the lives of both him and his mute wife-to-be Marta, and the many other excellently crafted characters that this story revolves around.

Once again the relationship between Bud and Marta is extremely well told and you’ll share their frustrations and joys as Bud tries to have Marta stay at home whilst he goes on his dangerous assignment to retrieve or destroy some stolen Gatling guns whilst at the same time getting back his stolen money in the face of impossible odds. Even though Marta is unable to speak you’ll have no problems understanding her motivations and thoughts through Rottman’s descriptions of her actions.

Throughout the story the author includes a lot of information about the workings of not just the Gatling guns but a variety of other weapons too.

As Bud infiltrates the rebel Mexican army whose General intends to carve out a piece of both Mexico and Texas for himself you’ll soon be wondering along with Bud how he can possibly achieve his aim. The more characters we meet the more complicated the plot becomes and as the rebel army grows into hundreds Bud comes up with a reckless, spur of the moment plan to complete his task which involves a stolen steam locomotive.

The book contains plenty of bloody action, particularly when the Gatling’s are used in anger and the final bid for freedom is filled with some dramatic and tense scenes.

Gordon L. Rottman concludes his tale with a chapter that explains what happens to the survivors for the rest of their lives which brings a very satisfying ending to his stories of Bud and Marta. So how does the third book, Marta’s Ride fit in? All will be revealed when I get around to reading it and if it’s anywhere near as good as the first two books then I’m sure I’m in for a very entertaining read indeed. 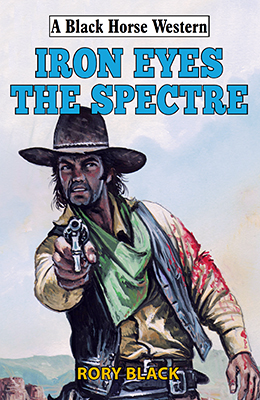 
Having delivered the body of wanted outlaw Mason Holt to the sheriff at Diablo Creek, infamous bounty hunter Iron Eyes collapses, badly wounded, and his would-be sweetheart Squirrel Sally desperately tries to find a doctor to help him.

However, unknown to Sally, she is heading into a dangerous and uncharted desert where a mysterious tribe of Indians live. Then when Holt’s older brothers discover their sibling is dead, they vow revenge and set out after the man who killed him. Soon both outlaws and Indians alike realize how dangerous Iron Eyes is.

The Iron Eyes series began way back in June 1999 and has gone from strength to strength ever since. Iron Eyes the Spectre being the twenty-eighth book in the series. Rory Black is a pseudonym used by Michael D. George and under his own name and other pseudonyms he’s written many Black Horse Westerns making up a variety of series along with a few stand-alone titles. Whenever I want a fast, action packed read I’ll often reach for one of his books because I know for sure I’ll be getting just that.

Iron Eyes the Spectre starts with the wounded bounty hunter travelling unconscious in the back of Sally’s stagecoach. It isn’t long before Sally is fighting for their lives as the Indians attack. This makes for some tense reading as you have to wonder how a heavy stagecoach can outrun the assault.

Every now and again the author leaves Sally and Iron Eyes in a deadly situation to write a chapter detailing how the older Holt brothers find out about the death of their younger sibling. This discovery leads to a violent reaction that eventually sees them heading into the desert in pursuit of Iron Eyes.

The author is extremely good with his descriptions of both characters and action scenes. Iron Eyes attempt to free Sally from the Indians is both dramatic and entertaining. His plan desperate and foolhardy leading to a humorous exchange to finish the book that left a grin on my face and the hope that it isn’t too long before the next Iron Eyes adventure is published. 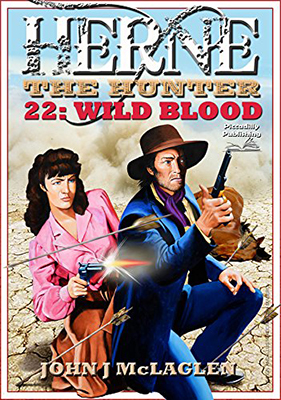 
Herne has been hired by Major Russell to stop the man who was blackmailing him over his youngest daughter’s gambling debts. What Herne discovered was that Cassie was involved in much more than just gambling – she was living in a world of violence, pornography and murder – and it was up to Herne to get her out.

Herne the Hunter is one of my favourite series written by the group of authors known today as The Piccadilly Cowboys. The writers behind the John J. McLaglen pseudonym being Laurence James and John B. Harvey, the latter of which wrote this entry into the series.

In many ways this book reads like a detective mystery as Herne delves into the background of the Russell family and those running the gambling house. This leads to attempts on his life and then we get the western elements back in full as Herne pursues two hired guns and shows he isn’t above treating the culprits brutally to get the information he needs. Of course everything isn’t as straight-forward as it seems and Harvey includes many twists and turns, not least the fact that no-one seems concerned with finding who killed a man named Conners, this dead man being the previous person Major Russell hired to stop the blackmail.

One of the things that makes this book stand-out from other westerns is the plot involving pornography, something that doesn’t appear to often in the genre, so if you are looking for a story that offers something a bit different then this book could be worth considering.

Harvey’s character studies are well done, each having their own personalities. His descriptive scenes creating an intense backdrop against which the plot is played out in all its brutality, and the violent acts are graphically illustrated.

Fans of this series, and others written by the Piccadilly Cowboys, will not want to miss this one and I believe any western reader will find much to commend in this book too.