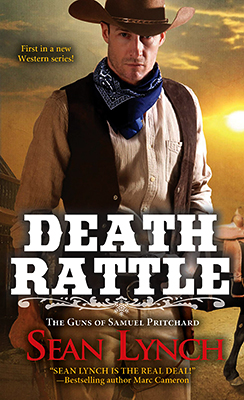 THE GUNS OF SAMUEL PRITCHARD #1
By Sean Lynch
Pinnacle, July 2019


In 1863, a teenaged boy fled his home in Atherton, Missouri, to escape the power-hungry men who murdered his father and stole his family’s land. He joined the Confederacy under an assumed name and rode with guerrilla raiders in the Civil War. Then came a decade as a Texas Ranger. Now, after ten blood-soaked years, he is finally coming home. Finally using his real name. And finally getting revenge against the cold-hearted devils who destroyed his family and his life . . .

This is the story of Samuel Pritchard. A man with a long history of violence, a deep sense of honour, and a wild streak of justice as dangerous as the guns that made him famous . . .

The first book in a new series and the first western from Sean Lynch, at the moment best known for his crime fiction but with this book that could, perhaps, all change.

Death Rattle is divided into four parts, Soldier, Ranger, Gunfighter and Home. Each section could almost be a stand-alone story in itself but Sean Lynch links them with passages about Pritchard’s surviving family members, his mother and sister, and the horrors that are befalling them back in Atherton. Will Pritchard return to his home town in time to save them?

The first three parts of the book show how Pritchard changes from boy to man, becoming a brutal killer as a death spirit seems to guide him and control him as his rage rises to drive his actions. This dark force seen by those around him, one of whom tells Pritchard how he can rid himself of it. As a reader I was gripped by this element of the story and wanted to discover if Pritchard could lose this cold-hearted blood-lust that had motivated him ever since he rose from the grave so to speak. Let me quickly add that this isn’t a supernatural tale, Pritchard isn’t dead, isn’t a zombie or anything like that, he’s a man who experience some very dark times and these horrific changes to his life seem to take a grip of his soul.

Sean Lynch writes in an extremely readable style that has produced a story that demands the reader keeps turning the pages. There is plenty of tough, violent action that sees Pritchard taking on massive odds at times. There’s even time for him to fall in love but like most things in Pritchard’s life that doesn’t end well either. The author has also created a terrific supporting cast of both friends and enemies that are a joy to read about too. Pritchard does border on the mythical a little in his abilities with his guns and to survive the situations he finds himself in, but that didn’t dampen my enjoyment of this novel and I’ll certainly be reading the second book, Cottonmouth, when it is published in January 2020.

Also available in audio formats.
Posted by Steve M at 12:08 No comments: