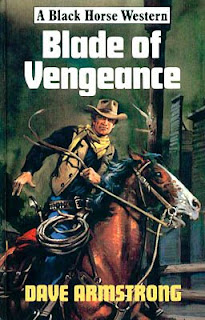 as by Dave Armstrong
A Black Horse Western from Hale, 1991
Judge McShane fears for his life as a man who had declared he would kill him has just been released from prison. Slash Harmon has his favourite weapon, a lethal Bowie knife, and a gang of hired killers to help make good his threat. All that stands between the judge and his would be killers are his drunken son, his son’s beautiful wife, Cassandra, a faithful old negro servant, an old dog - and one other...Art Adams, a lawman sent by the state governor. Adams could possible match Harmon’s skill with a knife but are the odds too great even for him?
This book is action packed from the word go, every chapter containing its fair share of violence. Harmon makes for an excellent villain who might or might not be behind the attempts on the judges’ life. There’s also a tangle of a love story as Cassandra and Adams find themselves strongly attracted to each other. Then there’s an Indian prowling around wanting to kill Adams.
I found this to be a very entertaining read, even though it was obvious from the start that Adams and Harmon would eventually face each other in a knife fight. The story raced to it’s violent conclusion which sprang a surprise or two as too the fate of a couple of the characters.
This book will have me keeping an eye out for more of Dave Armstrong’s work.
Posted by Steve M at 14:52

I also find that the end is signposted in a lot of the westerns I read - maybe it's because I've devoured so many. This one sounds like a good read and I'll put it on my list.

And although it doesn't tell us anything specific to this story, isn't that one of the very best BHW covers?

Dave Armstrong was Aussie Bill Mills (1919-1995). This was his first western. David Whitehead told his story, very well, in an early edition of the old Black Horse Express. It may still be in the "new" Express archives in a different format.

I'm sure I read that article when it first appeared Keith, but I'll go and check in again.