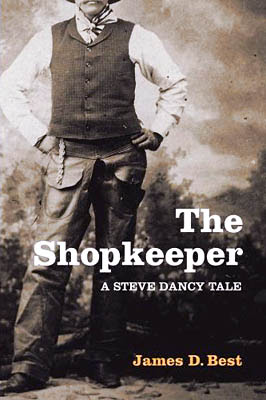 In 1879, Steve Dancy sells his New York shop and ventures west to explore and write a journal about his adventures. Though he’s not looking for trouble, Dancy’s infatuation with another man’s wife soon embroils him in a deadly feud with Sean Washburn, a Nevada silver baron.

Infuriated by the outrages of two hired thugs, the shopkeeper kills both men in an impulsive street fight. Dancy believes this barbarian act has closed the episode. He is wrong. He has interfered with Washburn’s ambitions, and this is something the mining tycoon will not allow.

Pinkerton’s, hired assassins, and aggrieved bystanders escalate the feud until it pulls in all the moneyed interests and power brokers in Nevada. Can the former city slicker settle accounts without losing his life in the process?

James D. Best presents the reader with a book that’s as much a political thriller as it is a Western; in fact these genres meld extremely well in the capable hands of Mr. Best. The story is filled with intrigue, exciting gunfights, and terrific characters – and it’s not just the men that come over as tough, manipulating, scheming, memorable characters, for James D. Best matches them in everyway with his well-crafted female characters such as Jenny (whom Steve Dancy is infatuated with) and her mother-in-law, Mrs. Bolton.

The story is told in the first person through Steve Dancy, the books hero. But is he a hero? If he is he sure isn’t squeaky clean, in fact a lot of the methods he uses to get his way aren’t that dissimilar to that of the bad guy, Washburn. Neither are above bribing, intimidating, or gunning down people before they have a chance to defend themselves as both attempt to gain power. But do books need a white-hat hero? Not to please me, that’s for sure, as I like characters that have a darker side to their personalities.

After the first two or three chapters this book really took hold and I found it difficult to put down as all the twists and turns kept me eagerly reading to find out what happened next. With all the plot developments the story has a natural fast pace and before I knew it I’d reached the end, leaving me wanting to read the next in the series – as of this date there are two further Steve Dancy tales: Leadville and Murder at Thumb Butte.

Sounds interesting. Did you realize you'd put The Storekeeper in your title?

Nope I didn't Jo. Will change it asap. Thanks :)