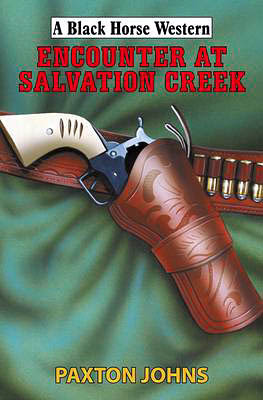 When rich young Englishman, Born Gallant, arrives in America after the death of his father, he goes first to see family friend William Pinkerton. The boss of the famous detective agency at once gives him an assignment: the head of the Kansas City office has been murdered, there has been an attempt on Pinkerton’s life, and he wants to know why.

From that day on, Gallant finds himself embroiled in a fight to the death against gunmen hired by warring cattlemen fighting against reorganisation of their industry. Helped by young trainee lawyer, Melody Lake, and a newspaperman, Stick McCrae, Gallant’s fight to bring the killers to justice takes him from Kansas City to the hell-hole of Salvation Creek. Will he prevail in the final bloody showdown?

This is the first book to carry the author name of Paxton Johns, and it proves to be a very good debut. Born Gallant makes for an engaging hero, a man who sees the humour in his own name, can play the out-of-his-depth greenhorn perfectly to throw his adversaries off balance, doesn’t carry a gun of his own, but is exceptionally sharp-witted and can more than stand his ground in a fight. In fact his bumbling fool act is used to great effect, particularly in a barroom scene when facing the gunman suspected of shooting Pinkerton.

The book contains a number of twists and turns, is peopled with many well-drawn characters of both sexes, its action sequences are superbly written, and finishes with a frantic race against time. All this means that Encounter at Salvation Creek is an exciting and entertaining read, which leaves me wondering, and hoping, that Born Gallant will appear again in a further adventure.

As the author explains in a note at the end, the Cattlemen’s Associations around which the story revolves really existed, and the changes being fought about did happen. Although the story is fictional it is based on something that did happen in the mid 1880s.

Sounds like a good one. I'll look out for it.

I used to use the name Paxton Johns when I wrote short stories in Australia. It's clearly a twisted version of my real name: John Paxton, and the S added for Sheriff. Tricky Dicky, that's me - but thanks, Steve, for the excellent and probably undeserved review.

John Paxton Sheriff ...AKA... well you know them all!