Bride of the Morning Star 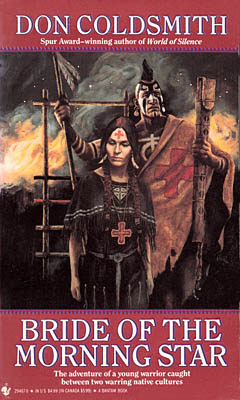 THE SPANISH BIT SAGA #19:
By Don Coldsmith
Bantam edition, May 1993

Bear Paws of the Elk-dog People married into the Pawnee Nation and adopted their rituals and customs as his own. But when they abduct a young maiden of the People, he is torn between past ties and loyalty to his new wife’s tribe. His dilemma is complicated by the secret arrival of his old ally Tall Bull, who has come to rescue his beloved Calling Bird – with or without Bear Paw’s help. Both realize that the Pawnee have already chosen her to be the bride of their most powerful god, the Morning Star, and at the end of the ceremony she must die….

Set about five years after the previous book in the series, Return of the Spanish, this story tells of Bear Paws struggles to accept some the traditions of the Pawnee, which in turn put a strain on his marriage and will, perhaps, bring about its end. The main problem that Bear Paws has to deal with is human sacrifice. In an author’s note at the beginning of the book Don Coldsmith tells of how this element of the story is based on fact and events in his story are similar to what happened to the Piegan girl, Lance Woman, that took place in 1856 and is said to be the last attempt by the Pawnee to carry out this traditional sacrifice to the Morning Star.

Don Coldsmith writes a gripping story that becomes a race against time. Characters are beautifully depicted and I soon found myself wondering if Bear Paw would be able to save Calling Bird, even with the help of Spotted Cat, a warrior of the People, who it is said can make himself invisible. Superbly paced, I found this book impossible to put down and all too soon found I had reached the end, and once more find myself eager to read the next book in the series.

Mention must be made of artist Tom Hall who really does capture the mood of the story well with his cover painting right down to colour and style of clothing and shape of the red crosses, along with the different coloured cross poles of the ladder behind the figures. Quite simply an excellent cover painting to front a top class book.
Posted by Steve M at 11:36