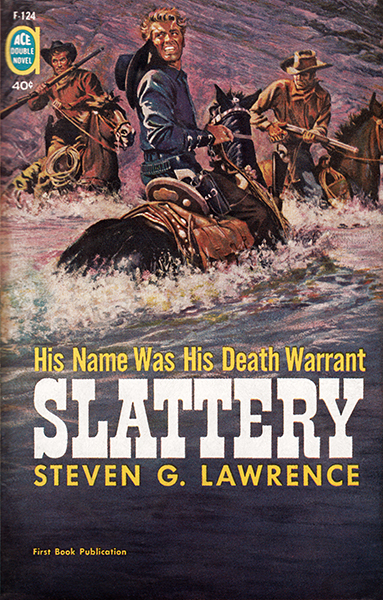 The cry sent fear and hate racing through the town. Five years before, on the very street he was now approaching, a howling mob had dealt Slattery a nearly fatal beating for the murder they were sure he'd committed. Long years in a federal prison had only strengthened Slattery’s determination to return and expose the untruthful testimony that had sent him to jail.

But the only person who knew the truth had mysteriously disappeared. And the man behind the frame-up had used five years to buy off the town of honest people.

What could Slattery prove to crowds driven by terror in a town where the law permitted him no gun to defend himself?

Tom Slattery first appeared in this Ace double book, it is backed by the second book, Bullet Welcome for Slattery. It’s interesting to note that Ace called the author Steven G. Lawrence and did so on the next two Ace doubles that featured Slattery tales too. Subsequent reprints and new stories saw the authors name become Steven C. Lawrence. The book Slattery also had a name change when reprinted and was retitled The Lynchers. Bullet Welcome for Slattery also had a title change as it was shortened to just Bullet Welcome. Steven G/C Lawrence is a pseudonym used by Lawrence Agustus Murphy.

I read a couple of the latter Slattery books many, many years ago and can’t really remember anything about them so looked forward to reacquainting myself with the character and finding out how it all began.

The plot is one that turns up in many westerns – the wronged man returning to set things right and get his revenge on the real guilty persons. What stood out to me in this book was how the whole town had been turned against Slattery so he couldn’t find anywhere to stay, stable his horse, or even get a meal. Of course, there is one or two people who help him, the main one being an attractive woman who hasn’t lived in the town of Gunnison long and she refuses to be intimidated by the rancher MacCandles and his men. It’s MacCandles that Slattery believes is behind the killing of his father and brother that led to Slattery being framed for murder. To prove this Slattery needs to find the missing witness who had written to him whilst in jail requesting a meeting. Just about everyone hinders Slattery’s search as they believe Slattery wants to find him so he can kill him for not telling the truth in court.

The author keeps the whereabouts of the witness a secret for a good portion of the book, although it’s easy enough to work out what has happened to him. Slattery has a good idea as to where he is too, but freeing him from his captors is difficult and fraught with danger. When Slattery achieves this the story becomes packed with action and leads to the expected showdown with MacCandles and his men. What seemed at first, to be a fairly traditional western tale that had a predictable storyline did have a surprise waiting, a twist to be sprung near the end that I didn’t foresee, and this made the story all the more enjoyable than it already was.

I’m glad I decided to return to the Slattery series after all these years and I’m now looking forward to reading the second book soon.