KNIFE IN THE NIGHT 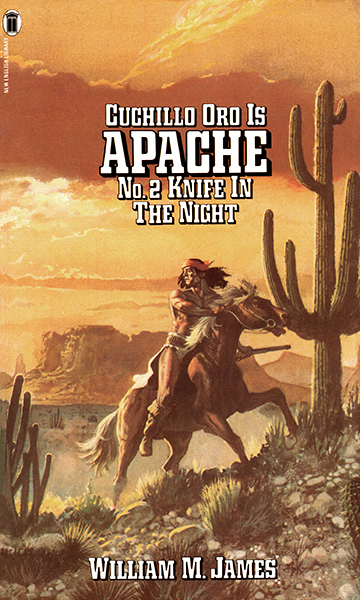 Cuchillo Oro, Apache warrior, continues his bloody bid for revenge on the man who removed two of his fingers joint by joint, destroyed the peace of his tribal settlement, and murdered his squaw and son.

Lieutenant Pinner is a marked man – a ruthless and sadistic Indian-hater who finally met his match. Luck seems to be with him for the moment but sooner or later his time will come, and when it does, he knows he can expect no mercy.

Apache was one of the best series to come from the group of British authors known today as the Piccadilly Cowboys. The series idea came from Laurence James, who wrote this book, and he shared writing duties on the series with Terry Harknett. When Harknett stepped away from the series, he was replaced by John B. Harvey. What makes this series unusual, is that it was first published in America by Pinnacle whereas all the other Piccadilly Cowboy series first appeared in the UK.

Knife in the Night was first published in America in 1974. It was a few years later that English publisher Sphere began publishing the series but they only put out the first four books. NEL then relaunched the series in the UK and published the first 12. You can see the cover art for both Pinnacle’s and Sphere’s editions below. 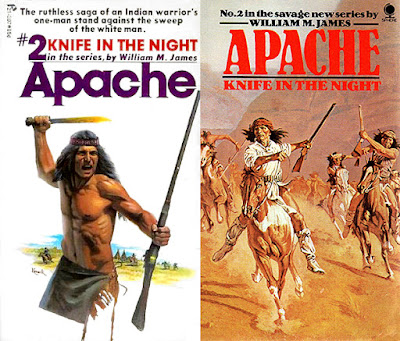 Knife in the Night begins a couple of days after the end of the first book, The First Death. Cuchillo is consumed with hatred, but needs to recover from the attack on Fort Davidson. Laurence James gives enough information to fill new readers to the series in on what has gone before so that reading the first book isn’t necessary, but I’d suggest doing so as it will greatly enhance your enjoyment of this book.
Cuchillo’s quest for revenge is interrupted when he witnesses the massacre of a complete village. The bandits make it look like Apache’s are the culprits. Cuchillo will not allow this, so aims to set things right by taking on all 14 bandits alone. This makes for an exciting and tense section of the book. Cuchillo then teams up with some other Apache’s to once again attack Fort Davidson in the hope of finding and killing Pinner. Cuchillo’s only white friend, John Hedges, is at the fort and their friendship will be severely tested when Cuchillo orders his friend to be tortured in an attempt to discover the whereabouts of Pinner which sets up another confrontation with the hated soldier. Will Cuchillo be successful in quenching his thirst for vengeance this time?
Laurence James probably wrote the more sadistic books out of the group of authors who make up the Piccadilly Cowboys, and this one certainly has some of that in it. James is good at exploring the darker side of the human race and this he does regularly in this tale. Whist James’ descriptions of violence aren’t as graphic as that written by Angus Wells, he certainly creates some vicious acts for this story, yet for all its horror it works, emphasising the harsh world that Cuchillo finds himself inhabiting.
Like in many of his books, James’ name drops, and one of the ways he does this in this story is by calling one of the characters Andrew Ettinger – Ettinger was the editor at Pinnacle. Ettinger is an actor who appears in the opening and final scenes and through him James adds some dark humour to the story.
Maybe not as good as the first book, but certainly a worthy follow-up that continues to develop the character of Cuchillo and the series theme extremely well and I was left eager to read the third book as soon as I can.
If you have trouble finding a copy of this paperback, you’ll be pleased to know that Piccadilly Publishing have started to put out the whole series as ebooks.
Posted by Steve M at 17:37