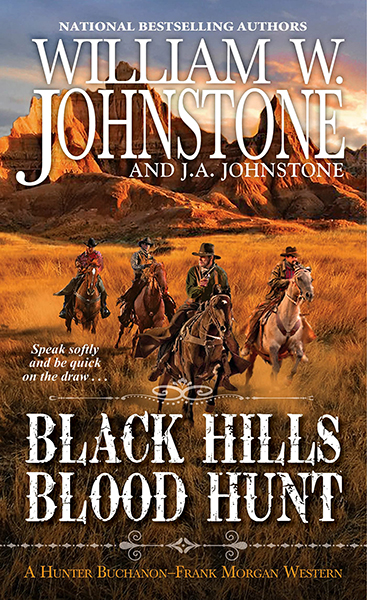 Deadwood, South Dakota. Miners flock there seeking fortunes, while cardsharps, bandits, and businessmen seek to deprive those who strike gold by means fair and foul. Legendary former lawman Seth Bullock plans to keep the peace by any means necessary – especially when his good friend, President Theodore Roosevelt, is expected in town to celebrate the anniversary of Deadwood’s founding.

Delayed in Washington, the President has sent his wife and children to the boomtown ahead of his arrival. But Ambrose Neill, a former New Your policeman jailed by Roosevelt for corruption has kidnapped two children in the First Family. Backed by a gang of trigger-happy outlaws and supported by a ruthless senator, Neill plans to politically control the Commander-in-Chief before slaughtering him.

But what Neill and his cohorts don’t realize is that Roosevelt has gathered a deadly posse of rough riders including Bullock – and the legendary father-son gunfighters Frank and Conrad Morgan – who are more likely to bring the gang to justice dead than alive . . .

The book begins with a couple of incidents from Roosevelt’s past that will shape the plot of this story. The author includes many real life people as well as his fictional cast which brings together some of Johnstone’s most loved characters, the main one in this tale being Conrad Morgan. Roosevelt is attempting to employ Conrad when two of his children are kidnapped so the Kid offers to help save them and brings his father, Frank Morgan, in to help. Later they will team up with Hunter Buchanon. Other Johnstone characters make brief appearances too, such as Smoke, Sally and Denny Jensen.

This is a well written story that is packed with tense situations and engaging characters, both good and bad. As Roosevelt rides to rescue his children the youngsters find themselves in a frying pan into the fire situation as events change and their survival chances become much slimmer. Roosevelt, and his posse, are totally unaware of how things have altered, and their mission looks doomed to failure.

As well as plenty of action scenes, the author also includes moments of humour. The bickering about age between Hunter and Frank making me laugh out loud. Yeap, this story is set in the very early 1900’s, so these familiar characters have aged quite a bit since we last read about them in their own series. Does this also mean that Frank won’t be quite as fast with his gun as he once was when he needs to be?

If you like stories that bring together fictional characters with those that really lived, or tales that see heroes from different series riding and fighting alongside each other then this is a must read. Of course, no fan of the Johnstone books will want to miss this either.