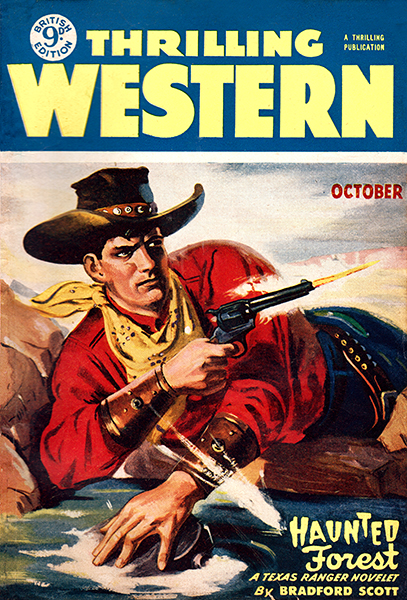 This edition contains three novelettes and four short stories, all of which appeared in the earlier American publication of Thrilling Western dated March, 1949. The same cover art was used for both.

The British edition begins with the novelet Haunted Forest by Bradford Scott and is one of sixty-five plus tales that appeared in the pulps starring Texas Ranger Walt Slade who is also known as El Halcon (The Hawk). Slade keeps his identity a secret as he takes on a spectre in a fight for lumber lands. As usual Slade is really good at figuring out what is going on and solves everything with ease. This tale was filled with action, although it was slowed down a little when Slade explained how a hydraulic ram worked which I thought went on too long and became tedious. This was an entertaining story as have been other Walt Slade tales I've read. Bradford Scott is a pseudonym used by A. Leslie Scott.

Next came the short story Red Creek Showdown by Peter B. Germano writing as Barry Cord. Lin Peters has to face death as he tries to figure out who’s trying to stop him driving a stage and why. Like in many tales by Germano this one has a couple of neat twists, although the main reason as to why the culprit wants to stop the stage isn’t explained, it’s just left for the reader to decide. Very enjoyable, but could leave some readers frustrated.
Novelet Six-Guns Sing at Night by John H. Latham is the third tale. I believe this is the authors real name and that he also wrote for the pulps as Tom Brand too.  Peter Weaver blames the death of his dad on Big Joe Brady but has never been able to prove it. The truth comes out when rancher Lon Gentry springs a trap to capture Brady who he accuses of being a rustler. There are some nice moments of humour in this tale and this was my favourite story in this issue and it left me eager to try some more of Latham’s work. 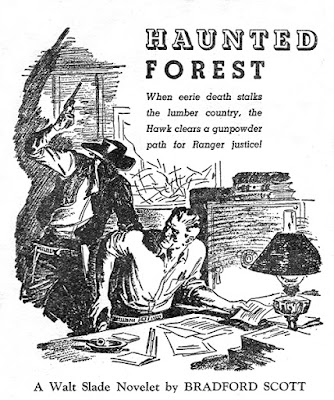 Trouble Talk takes just over three pages to tell. It’s written by Tex Holt, which is a house name, and I’ve not been able to discover who the real author is. This is the story of Sheriff Bill Lowell of Cottonwood, a man who didn’t think he needed a deputy as he hunts for a killer known as the Gray Ghost. It has a twist ending that was easy to work out, but the tale did hold my attention throughout.
Another short story follows, this one being Death Grins in Moonlight by Dupree Poe. Poe is the authors real name and he also wrote pulp tales as Roger Rhodes. This is the most gruesome story of all those in this issue and I was quite surprised by how graphic it was, especially during a vicious attack on a wolf. This animal will eventually get its revenge as it helps bring a scoundrel to retribution. Perhaps a little far fetched but it certainly made for an excellent ending that left me curious to try more of Poe’s tales.
The Doordevil of Humpwallips is a novelet by Sly MacDowell, which is the author’s real name, and it stars his series characters Swap and Whopper in a whole load of trouble as they get tagged as oyster pirates. I don’t think I’ve read any other stories about oyster rustling, so that added an interesting angle to the tale. The setting is a bit more modern than the other stories as people drive trucks whilst others ride horses. There’s some fun humour sprinkled throughout as Swap and Whooper try to talk themselves out of trouble only to dig themselves in deeper. I won’t be rushing to read another tale about Swap and Whooper but I won’t skip another story when I pick up another pulp that contains a tale featuring them. As far as I can tell they appeared in 73 pulp tales and I have four or five more in my collection.
The final tale is the short story Six-Gun Jamboree by Lew Martin. This is a pseudonym shared by Norman A. Daniels and Donald Bayne Hobart, but I’ve not been able to discover which of them wrote this. Lasting one and a half pages there’s not a great deal of plot to get your teeth into as two life-long friends suddenly become foes over a lady.
Overall, I found this to be a very readable issue of Thrilling Western that has introduced me to a couple of authors I’d like to read more of. 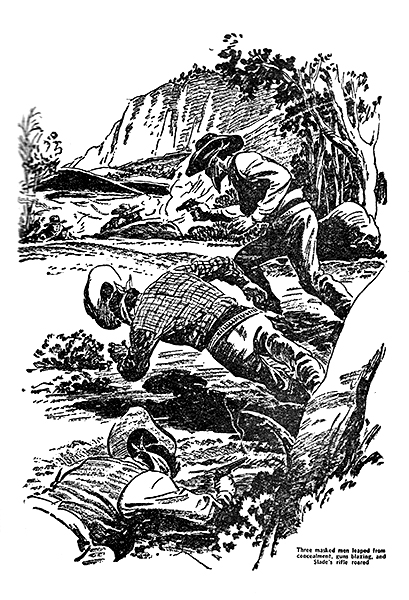 Tex Holt is one of several pseudonyms of Archie (Lynn) Joscelyn.
Tiziano Agnelli

Thanks for letting me know.