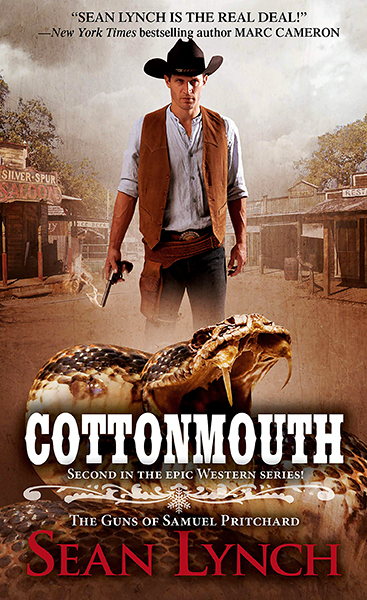 THE GUNS OF SAMUEL PRITCHARD 2
By Sean Lynch
Pinnacle, February 2020

1874. After losing his innocence in the Civil War and risking his life as a Texas Ranger, Samuel Pritchard has finally settled into a peaceful life in his hometown of Atherton, Missouri. As marshal, he hopes to put his bloody past behind him. To see his sister marry his lifelong friend. To find a wife and raise a family. For the first time in his life, Pritchard isn’t gunning for anyone – and no one is gunning for him. Or so he thinks. Strangers have arrived in Atherton. Hard-eyed men with guns. Someone has placed a bounty on Pritchard’s head: $10,000 in gold, deposited anonymously in Wells Fargo bank, payable to anyone who puts the legendary pistolero in a pine box. . . .

Although this is a self-contained novel, and if you haven’t already done so, then I’d suggest reading the previous book, Death Rattle, first, as a number of characters return from that book and some of the events from that story are mentioned too. Sean Lynch does include enough background in this tale to explain what has happened before so it isn’t essential you read that earlier book first but it may enhance your enjoyment of this one if you do so.

Once the bounty hunters start arriving in town, this book becomes a tale of almost non-stop action. Fast, violent gunplay that the innocent become victims of too. Pritchard leaves town in an attempt to draw the gunmen away from Atherton as he tries to discover just who put the bounty on his head and why. Not all the troubles leave town though, and those left behind find themselves in deadly peril and the townsfolk find themselves praying that Pritchard will return in time to help them face this threat.

Sean Lynch weaves a tangled web of deceit, mystery and danger that often explodes in bloody exchanges of lead. The author has created a wonderful set of memorable characters for this tale, both good and bad, that will have you rooting for them or hoping for their swift demise. Lynch also includes humorous moments, mainly in dialogue, that fit easily and naturally into the swift flow of the prose.

Like the first book, I found Cottonmouth to be a thoroughly entertaining read. The next in the series, The Blood of Innocents, is due to be published in August and the fourth book, The Trainwreckers, will follow in October and I’m really looking forward to reading them both.