THE FEUD AT BROKEN MAN 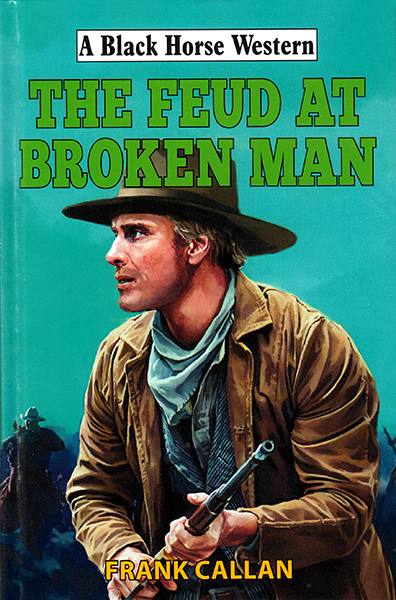 Lord Harry Lacey, the youngest son of an English aristocrat, has run away from debts at home to start a new life in America, using his skills with horses and guns to make a living as he journeys west to Colorado. Then he decides to give up his guns and start a new life as a public speaker in the new settlements where he believes people will be keen to experience culture.

However, arriving in Broken Man en route for Denver, Lord Harry witnesses a young girl being badly wounded in crossfire and quickly learns that the town is being torn apart by a feud. Seeing an opportunity to do something useful, he tries to influence local leaders to resolve the situation – and finds that some disputes can only be settled with a gun.

Frank Callan’s first Black Horse Western is filled with interesting people that play out the events in this slow burning tale. There’s not a lot of gunplay, something that should be expected as the main character, Lord Harry Lacey, doesn’t carry a gun. Violence is simmering under the surface though as the plot develops and backstories are revealed.

There’s a lot of bickering and internal politics, especially from the group of people who’ve brought Lacey to town to speak to them. Mixed into this is the main theme of revenge that the title of the book refers too. It isn’t long before someone else has their own desire for vengeance lit. Jealousy also fuels others, pushing them towards violence. Murder soon has the townsfolk reacting in anger. All these plot threads soon entwine as the author moves the story forward to it’s inevitable conclusion which see an unarmed Lacey trying to keep the townsfolk safe from a small army intent on killing. The final gunfight didn’t play out as I expected, although I did guess how it might end for one of the major players.

The author certainly has his own style, and the story had a very English feel at times, mainly due to words and phrases used. I found the book to be an easy, quick read that held my attention but I would have liked a bit more action to satisfy my wants from western fiction.