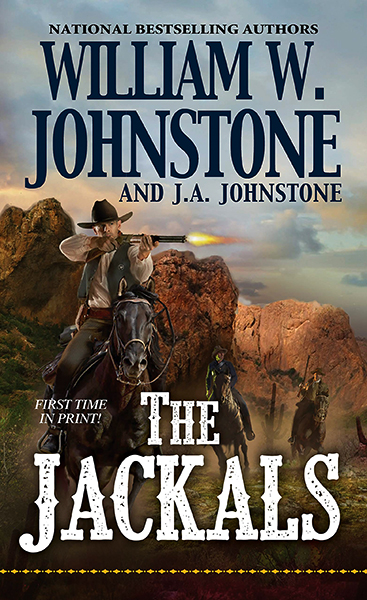 With Apaches on the prowl, ex-cavalry sergeant Sean Keegan, bounty hunter Jed Breen, and ex-Texas Ranger Matt McCulloch take shelter in a West Texas way station – along with a hot-as-a-pistol female bound for the gallows, a spiteful newspaper editor, and a coward with $50,000 who promises them five grand if they’ll deliver his blood-soaked stash to his wife.

Turns out, Indians might be the least of the problems for the trio, soon to be known as the Jackals. The loot’s stolen property of the vengeful Hawkin gang, and these prairie rats are merciless, stone-cold killers. And the brother of the man the woman killed wants to butcher her himself rather than watch her swing. McCulloch, Keegan, and Breen are ready for a showdown – but the Jackals may not live to spend that $5,000.

These Johnstone books are getting longer and the author certainly packs a lot of excitement into those 359 pages. This story fairly gallops along and there’s never a dull moment as gunfight follows gunfight.

At the start the author switches between his three main characters, to tell the stories of how two become ex-cavalry and ex-ranger and of the events that see them and the bounty hunter following separate trails that will see them arrive at the way station under siege by the Apaches. We are also introduced to the outlaws, the coward, and the woman. There is another character waiting at the way station, an actor with a wagon load of props and both he and his items will have an important role to play in the bloody, violent outcome of this tale.

I found the book an easy read that urged me to keep turning the pages. There were some terms used that I don’t often see in westerns, such as the words bubba, punk and arse – the latter appearing only once before being replaced by the more commonly used ass in books about Americans.

Once knowledge of the $50,000 become known to the people trapped in the way station it was interesting to see how some of their character traits changed as greed took its grip on them.

Amidst all the violence there are some moments of humour, mainly coming from the actor, in either deeds or words.

The final desperate attempt to break-out of the way station makes for gripping and dramatic reading. The race for freedom being a real out of the frying pan and into the fire situation that leads to more gunplay and double-cross that very few of the characters survive in one piece.

This book is the first in a new series and the second one has just been released and I’m looking forward to reading it very soon.