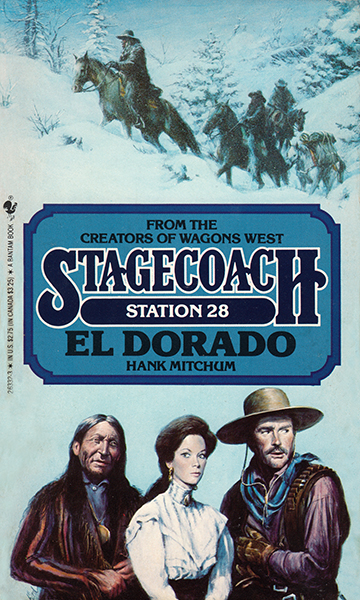 The stage carrying Andrea King never made it to Placerville. Solomon King, her husband, knew she was somewhere in the Sierra Nevada mountains, but was she alive or dead? With Andrea’s sister Lorraine and the Indian guide Gray Hawk, King began his grim search.

Then the first storms of winter hit with blinding fury. Accompanied by a lost party of miners carrying gold, King made it to the relay station of El Dorado – only to find that someone in the party wanted all the gold for himself and thought eleven lives was a small price to pay.

The snows made them prisoners of El Dorado, and one by one they died. King had to find the killer before the killer found him – and ended his desperate search for his wife.

The Stagecoach Station series of books are stand-alone novels that are linked by having a story that revolves around a stagecoach or stagecoach station. One or two books do see returning characters, so those tales probably need reading in order, but generally you can dip into this series anywhere and enjoy each book for what it is.

Hank Mitchum is a pseudonym behind which 14 authors wrote. The writer of this entry is Lew A. Lacy and he wrote more books in this series than anyone else.

As well as being a western, this is a murder mystery tale too. The author keeps the reader in suspense as to who the killer is until the end. Of course, as the victims fall the list of suspects gets smaller. Lew A. Lacy writes the growing sense of fear well, and his characters become more and more on edge with each death. Accusations fly and friendships crumble. No-one trusts anyone and being trapped in a snow bound stage station doesn’t help.

This is a well told story that had me on the edge of my seat a number of times. The characters are all engaging and the desperation to discover who the killer is provides some great tension to the story. Being murdered isn’t the only threat to the trapped people’s lives, dying of starvation is another fear.

Lew A. Lacy also keeps the fate of Andrea a secret too. This only to be discovered after the murderer is unmasked and dealt with. Lacy also has a couple of twists waiting to surprise the reader which added to my enjoyment of this story.

This book proved to be a very entertaining read and I’m sure it won’t be long before I read another by Lew A. Lacy, or try one or two of the other books in this series as there are some great authors  behind the pen-name of Hank Mitchum.

Are you sure this one is by Lew Lacy? I have seen a bibliography of William C. Knott that is listing El Dorado as one of his ...

Not 100% sure, but it is from a listing I have that names all the authors for the entire series.

Where did you see the bibliography of Knott?