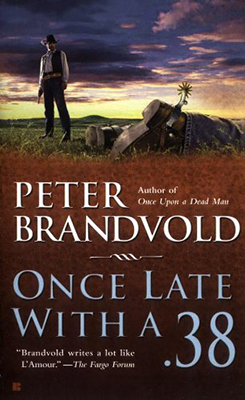 
Sheriff Ben Stillman has enough of a hard time keeping peace in the town of Clantick without having to worry about the likes of Matt Parish. Since his father died, Matt has been responsible for the Circle P Ranch – and his hot-headed streak has been responsible for a lot of trouble with the other ranchers . . . including his future father-in-law, Tom Suthern.

Despite failing health and loss of profits, Tom refuses to sell his spread to Matt, even if he is marrying his daughter. So, when Matt is discovered in the presence of Tom’s bullet-riddled corpse, people naturally assume he murdered the old man. Now, it’s up to Ben Stillman to protect Matt from a trigger-happy posse and find the real killer – before it’s too late . . .

Sheriff Ben Stillman has always been one of my favourite characters to come from the pen of Peter Brandvold, perhaps because reading the first Stillman book was the one that introduced me to the authors writing and I’ve been a fan ever since.

Peter Brandvold’s work can often be very graphic when he describes the violent scenes in his stories and the intimate moments between male and female characters. Language can be very colourful too, but in this book all these elements are kept to a minimum.

A number of other people from the town of Clantick have parts to play in this fast-moving story that sees Doc Evans taking a central role. In this series Stillman often tracks known outlaws but this time he has to become a detective, questioning suspects (and there’s a fair few of them) before the pieces of the jigsaw come together. Even as they do the plot thickens with twists and turns as double-cross and triple-cross further complicate the situation.

The story regularly switches between a variety of characters as the violence escalates. Stillman eventually blundering into a situation that it seems he cannot possibly escape. Tension mounts as surprising revelations come one after the other leading to a thrilling conclusion.

Once Late with a .38 is another excellent entry into the Sheriff Ben Stillman series and I’m certain it won’t be long before I read the next book.

* I’ve indicated at the top of this review that Once Late with a .38 is book seven of eight, which is true if we look at the original run of the series published by Berkley. Some eight years after book eight appeared Peter Brandvold started writing the series again. There are now 14 and they are all available through Wolfpack Publishing.

Fine review of a fine writer.