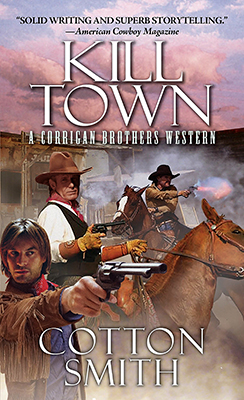 THE CORRIGAN BROTHERS
2 of 2
By Cotton Smith
Pinnacle, November 2016


Agon Bordner is dead, and the ranch he cheated for has been handed over to Deed Corrigan and his brothers. But before he can get the Bar 3 back on its feet, Deed, Holt, and Blue must fight to rebuild the town by buying the bank and appointing a marshal. For a moment, peace looks possible for these three weary veterans of the trail – until the guns begin to fire.

Seeking vengeance for their boss, eight of Bordner’s killers storm the town. They rob the bank, kill the marshal, and break the rest of their gang out of the jail. To save the town, Deed and Holt hit the trail, planning vengeance the only way they know how. Blue stays behind, stepping into the marshal’s role to guard the jail, as the Corrigans risk their necks to save the only place they have ever called home.

This book continues some plot lines that were starting in the first Corrigan Brothers book Ride Away, and readers may prefer to read that before this one, although Cotton Smith includes enough background information to explain what has happened before so the storyline will make sense to those readers new to the series.

After the violent attack on the town, Holt, now a lawman, along with Deed, lead a posse in pursuit of the outlaws who’ve ridden off with the bank money. This chase and the bloody fight to retrieve the stolen money takes up a good portion of the book. This hunt and the desperate flight back to town hampered by Comanche attacks makes for some thrilling reading.

Once the survivors make it back to town the story’s momentum slumps a bit as we follow Holt as he makes himself known to some of the families that live around the town. Although a couple of these new characters have further roles to play, I wondered if we were being introduced them for a future book? The story picks up again as the remaining outlaws head back to town to take their revenge on the Corrigans and the town and we have another bloody battle to bring this plotline to an exciting close.

Overall, this is a very readable book filled with great characters that include a samurai and the stray dog Tag. The action isn’t overly graphic, there aren’t any sex scenes and bad language is none existent. The plot isn’t complicated and is easy to follow. By the end of the story we are introduced to new characters and a major plotline setting us up for the next book. Unfortunately, that wasn’t to be as Cotton Smith passed away at the age of 76 before either of the Corrigan Brother books were published.