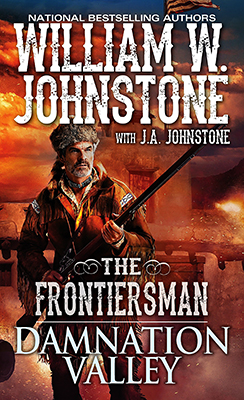 THE FRONTIERSMAN
number 4 of 4
By William W. Johnstone with J.A. Johnstone
Pinnacle, July 2018


A Rocky Mountain winter has left Breck reeling from the carnage unleased by bloodthirsty trapper Jud Carnahan – and readying a quest for vengeance as ruthless as his prey. It gets even deadlier when Carnahan lays siege to a trading post on the Yellowstone River. He’s left the owner dead and kidnapped a pretty hostage who can turn a nice profit once he puts her to work.

Following his trail takes Breck clean to Santa Fe, where Carnahan’s set up a brothel bursting with hardened beauties, a saloon for cutthroats and thieves, and a trap for the frontiersman who’s tracked him every bloody step of the way. But over the rough, merciless miles it’s taken Breck to get here, he’s built up a raging fury that’s going to make this unholy town swim in blood.

The winter feud between Breck and Carnahan formed the major storyline of the previous Frontiersman book, The Darkest Winter. Although it’s not essential to read that book before this one it may be in the readers interest to do so. Damnation Valley does contain enough information to fill a new reader in on what happened before so this book can be read as a standalone.

It takes around half the book before the siege at the trading post is resolved which results in the kidnapping of Ophelia Garwood. It’s also during Breck’s time at the trading post that we are introduced to a variety of characters that will play with the frontiersman’s emotions in different ways. Soon Breck’s hatred for Carnahan will reach new heights and he will stop at nothing to kill this evil man.

The author describes the battle scenes and smaller confrontations extremely well, places the reader right in there amid the action. At times the bloodletting is vicious but not gratuitously so. The atrocities performed by Carnahan will soon have the reader urging Breck on with his mission. Problem is Breck doesn’t have a clue as to where Carnahan is headed but his desire to both save Ophelia and kill his foe keeps him going when the odds are against him.

The book takes on a slightly darker tone once Breck arrives in Santa Fe and it’s here that the author has a brutal twist waiting, something that took me completely by surprise. Before his final bloody clash with Carnahan, Breck will team up with two characters long time readers of the Johnstone books will have met before, Audie and Nighthawk, and they will have important roles to play in the outcome of Breck’s quest for vengeance.

This story, in fact all four books in this series, are gripping, fast-moving reads. Breckinridge Wallace is likeable as are many of the supporting characters, some of whom appear in more than one book. I particularly like the time period these stories are set in, and it makes a pleasant change from the many other westerns I read that are set in the 1880’s. I can only live in hope that one day further tales about the Frontiersman will appear.