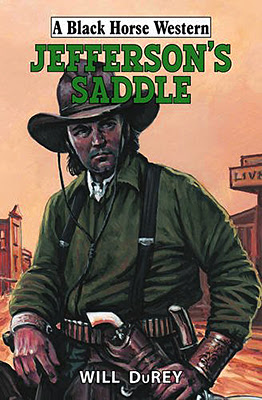 
It is meant to be a day of celebration in Mortimer, Texas, but everything changes when Charlie Jefferson arrives in town. Left for dead after a brutal ambush and robbery, Charlie is intent on finding the man who did this to him.

En route to Mortimer from the wastelands where he was left to perish, Charlie stumbles upon a dying Texas Ranger. Unwittingly, he is drawn into a plot involving the town’s council.

By showing mercy, Charlie becomes part of the plot, whether it ties in with his plans or not. Charlie’s mission in Mortimer is no longer personal. The fate of the whole town rests with him.

Will DuRey returns to Charlie Jefferson who first appeared in his last book, Arkansas Bushwhackers. Charlie is heading for home, and to the girl who is waiting for him, his stake hidden in his saddle. Of course this saddle is one of the things stolen from him, so he must get it back as he needs the money it contains to start his new life. The saddle’s whereabouts is the mystery plotline in this very fast paced story.

DuRey lets the reader in on the con trick being played on the town and seeing how Charlie finds out about this, and deals with it, makes for some gripping reading. This and the missing saddle aren’t the only problems Charlie has to deal with, for there’s an attractive, unattached, girl who takes a shine to him. How can he let her down without hurting her especially after she risks her life to save him?

It’s no surprise that all these story threads become entangled and lead to an exciting final showdown that resolves everything neatly, leaving me hoping that we haven’t seen the last of Charlie Jefferson, because I for one would certainly read another tale about him.