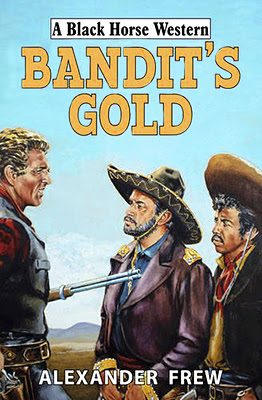 
When Joe Flint meets Matt Harper and Pete Brogan, he cannot help but be enticed by their tales of gold and mystery. They tell him of a legendary Mexican leader who reigned during the civil war, funding his leadership through a criminal network.

Drawn by the promise of fortune, he follows his two new friends who are determined to find out the truth about the fort where the Mexican leader lived. But, along the way, they are attacked. Flint learns too late he has put himself in the hands of a madman.

Will he find his fortune? Or has Flint got himself into a situation too dangerous to get out of alive?

This is the second Black Horse Western to be published under the author name of Alex Frew* and the first I’ve read. With fairly small print and chapters beginning a few lines down from the end of the previous one rather than on a new page, this is one of the longer BHWs I’ve read. In fact Hale seem to be publishing westerns of this length much more often these days.

Frew puts his hero into all kinds of danger from the outset. It isn’t long before Flint and his companions find themselves joining a rebel army under a superbly drawn bad-guy whose appearance would fit into any horror novel. Being part of an army that will turn on Flint if he gives his real reason for being there away means he and his two friends are up against far superior odds that they can’t hope to beat in a fight.

There are some tense scenes, not least when Flint finds himself flung into a pit containing a mad bear. How he escapes is probably the highlight of this story and makes for some very gripping reading.

Flint also finds himself having to deal with the advances of two women, both of whom he is attracted too, both having agendas of their own, so getting involved with either could have a deadly outcome.

Frew builds his story well, its conclusion seeing a violent battle taking place as Flint attempts to steal the stolen gold from the rebel leader and his army. Frew also has a surprise twist waiting for the end that I didn’t see coming that brings the story to a satisfying close.

*The book I have shows the author’s name as Alex Frew yet those on Amazon etc have the cover showing him as Alexander Frew and that is how he is listed too if you want to search for his books. He has another BHW out in December and that cover shows his name as Alex Frew.