Guns on the Praire 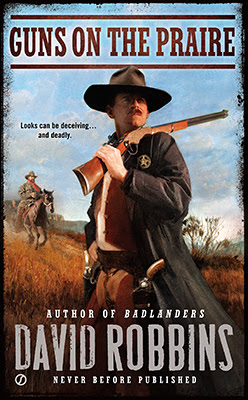 
Alonzo Pratt, alias Robert Grant has always survived by his wits, working his way up from petty pickpocket to polished con artist. Saddlebags bulging with disguises, he is a master impersonator, whether limping in Civil War uniform or toting a Bible and dressed in black. On occasion, a tin star pinned to his vest is just the ticket to winning the trust of his innocent marks.

When Federal Marshal Jacob Stone happens to come across another lawman while taking in a wounded prisoner, he’s grateful for some assistance. And when he hears tell that Cal Grissom’s gang is roaming these parts, he enlists Deputy Grant to help him track down the thieves. But he does wonder why his new partner seems so…reluctant.

Alonzo never planned to join a manhunt. But now he’s shooting Sioux and rescuing an outlaw’s gorgeous daughter. His disguise may have fooled the marshal, but it won’t stop lead….

David Robbins has come up with a top class western with Guns on the Prairie. Excellent characters on both sides of the law will soon have you laughing with them, fearing for their well-being, hoping they survive or met their demise. Alonzo Pratt’s frustrations, confusions and despair at the situation he finds himself in is superbly described by David Robbins. Fleshing out of characters is to tell their backstories, all which will have a part to play in how they deal with the dangers that face them.

There’s plenty of action and cliff-hanger chapter endings making this a truly difficult to put down read. You will certainly be wanting to find out what happens next. The pacing is perfect as the tale races towards its gripping final standoff that could end in any one of a number of ways, and I doubt you’ll guess how the book does conclude, as one of the surviving characters says, “This didn’t end as you thought it would, did it?” No it certainly didn’t, but it does finish in fine style making for an extremely unforgettable ending.

If you only read one David Robbins western this year then make sure it’s this one. If you’ve yet to try his work then I urge you to grab a copy of this book, it really is a great read.

Steve,
Thank you for the review.
Glad you caught my little tease about the ending.
:)
David

Your review makes it sound mighty enticing. Will add it to my "Pick up" list.