Slocum and the Fool's Errand 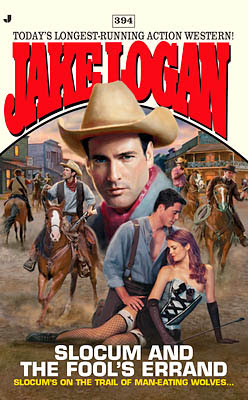 After collecting the reward for capturing Oklahoma Bill and his gang, Slocum’s ready to hightail out of Rocas Rojas, New Mexico. But before he can pack his saddlebags, Jack Halsey comes tearing into town – minus some fingers, the result of a run-in with a pack of wolves.

Jack wants Slocum’s help tracking down the wolves because they ate something more valuable than his fingers. But Jack’s tales keep changing, and Slocum doesn’t know what to believe. And when Apache warriors and Oklahoma Bill’s former associates join the chase, Slocum must uncover whatever it is Jack is really hiding – and whatever Jack believes is in the belly of the beasts…

One of the first things I noticed about this book is that the author very rarely shares his characters thoughts with his readers, this makes some of their actions come as a surprise and gives them a hard edge and also helps add a sense of mystery to Halsey’s mission. For most of the story we follow Slocum but the author does occasionally move away from him to explain what those hunting for Halsey are doing.

Jack Halsey is a great character, his constant griping, changing story, and urgency to find the wolves make him very memorable. I must also admit to not guessing what it actual was that the wolves ate along with Halsey’s fingers.

Slocum and Halsey join forces with a band of Apache warriors and this leads to a well-written and exciting battle with the wolf pack, this bloody fight being the highlight of the book for me.

Everything is neatly resolved in a low-key ending that finished the story more or less as I expected. Getting to this ending was an entertaining and fun read.

Also available as an eBook
Posted by Steve M at 11:20