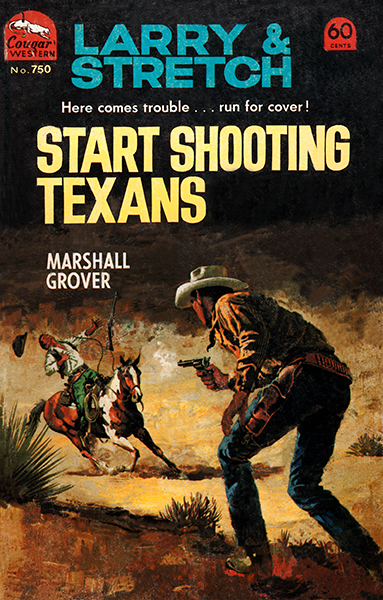 The tranquillity of South-West Missouri shattered when the Garfield gang made camp on Thunder Mountain.

Abby Garfield, wife of the boss-outlaw, was captured by the wily Hank Todd, marshal of Coreyville. Soon, the citizens of this isolated settlement were in fear of their lives, wondering if they could survive the savage onslaught of the bandit-band, when Garfield came to rescue his woman.

But Hank Todd was a Texan, befriended by two fellow-Texans, already famous as the West’s most notorious trouble-shooters. Larry and Stretch couldn’t be deterred by superior numbers, for they had never learned the meaning of fear.

As far as I can tell, this is the 68th Larry and Stretch western put out by Cougar. Sometime later Horwitz took over the publishing of the series and started with their own number one. Altogether there are 440+ Larry and Stretch books. In America Bantam published some of them, but for legal reasons the author’s name was changed to Marshall McCoy and Larry and Stretch became Larry and Streak. Marshall Grover/McCoy is a pseudonym for Australian author Leonard Meares and he wrote 746 westerns under a variety of pennames.

Meares introduces a lot of great characters, be they outlaws, lawmen or citizens, which include a memorable house maid and a confederate soldier that doesn’t know the Civil War has been over for years. Larry and Stretch don’t take centre stage for the first half or so of this story, in fact they hardly appear. They do have a novel way of getting free board and feed right at the beginning, which is how they become involved with Hank Todd and the troubles facing the town of Coreyville.

The author also includes humour, be that via dialogue or situations. One of the incidents that put a big grin on my face being Todd’s arrest of Abby Garfield and his way of getting her to his jail. The story isn’t short on action either and this involves fist-fights, gunplay and even a cannon. As the situation becomes more desperate Larry and Stretch step forward to orchestrate the defence of Coreyville and set out to take down the Garfield gang.

Start Shooting, Texans proved to be a very entertaining read that made me wonder why I haven’t read one for such a long time, probably before Western Fiction Review was ever thought of. What I do know, is it won’t be anywhere near as long before I read another.