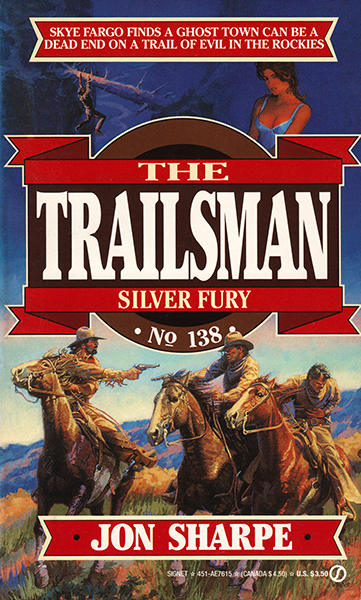 When Skye Fargo rode into the tiny town that called itself Serenity, it looked like a place that time and trouble forgot. It was just a huddle of ramshackle wooden buildings nestled in a remote Rockies valley where the men were lazy and the women were willing. A smooth-talker named Traute ran it with an iron hand in a velvet glove, and you didn’t want to cross this self-made king of the mountain. But the Trailsman found that out too late…after he had uncovered the vein of hellish evil under this peaceful paradise…and found himself stripped of weapons and hope in a trap that made death seem sweet…

In this extremely fast-moving tale, Fargo becomes fuelled by rage, a killing urge that will see him stop at nothing to wipe the town of Serenity off the earth and blast Traute to hell. Senseless deaths and being badly mistreated are what sends the Trailsman off on a killing spree.

The author really piles on the problems and deadly situations for Fargo to have to deal with. Fargo doesn’t always come off best either, he on the receiving end of some vicious beatings, which of course heighten his resolve to take revenge on those responsible.

Filled with memorable characters and tough dialogue, this is a book that has strong roles for both men and women. The story is filled with action that left me breathless. Descriptions of landscape and people give a great sense of time and place. The violence is often brutal and fairly graphic. As the Trailsman is an adult western series there are a couple of explicit sex scenes too.

The author writing behind the pseudonym of Jon Sharpe for this book is David Robbins and he can always be relied on to provide the reader with a thrilling tale that should entertain all western fans.