MAN ON THE BUCKSKIN 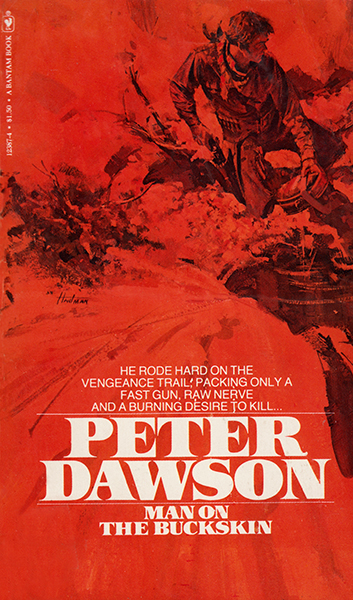 Frank Rivers spent four agonizing years in the filth and terror of the territorial prison – framed for the killing of his own father. When he came out, there was nothing left in Rivers but raw, bitter vengeance. He was going to track down the killers who murdered his father and execute justice with his own hands. But Kate Bond, the one human being who believed in Rivers, was in desperate trouble – trouble that got in the way of River’s scheme of revenge…

This book proved to be a gritty read. Filled with tough men, and one woman, who are determined to get what they want, whatever the cost. Rivers’ first problem is the Ute Springs lawman, sheriff Jim Echols who detests Rivers and hates the idea he’s been pardoned so does everything he can to drive Rivers out of the area. Then there’s Lute Pleasants, he’s trying to drive Kate Bond and her brother off their land and his methods involve the use of barbed-wire fences, building dams and killing his own half-brother. The story involves plenty of hard talk, beatings and fast gunplay.

The author, Jonathan H. Glidden writing as Peter Dawson, lets the reader know near the beginning of the tale who is who and that Rivers is an innocent man. Following Rivers’ struggles to decide whether he should leave Ute Springs, stand-up to the sheriff, or stay and help the Bonds in their fight with Pleasants, makes for some gripping reading. Pleasants’ changes from anger to calm provide some tense scenes that are all the more enthralling when the reader knows who he really is and you have to wonder how Rivers, the Bonds and Echols can beat his schemes.

What of Rivers’ quest to find the killers of his father? Will he be successful as he hasn’t got any clues as to where they are? Will helping the Bonds put him on the right trail? You'll have to read the book to find out the answers to those questions.

This is the first time I’ve read anything by this author and even though the plot didn’t standout from countless other westerns, the writing style gave it an enjoyable edge that’ll have me on the lookout for more books by Jonathan H. Glidden.

I need to get reading again so I'll look out for this one. Thanks.

Jonathan Glidden died in 1957. The name "Peter Dawson" became a house name and, in my opinion,
the later "Dawsons" are inferior to Glidden's work. I would be skeptical of any Peter Dawson novel originally published after 1959.

Thanks Jim. I only have one other Peter Dawson book, The Showdown, from 1964. It doesn't have Glidden's name (or anyone else for that matter) after the copyright date as Man on the Buckskin did, so I'd guessed it was by someone else. Thanks for confirming that for me.