The West made him a man. The War made him Shiloh . . . named for the bloody battle that twisted his soul. And when the fighting ended, he became a bounty hunter. Because for him, death is a way of life. 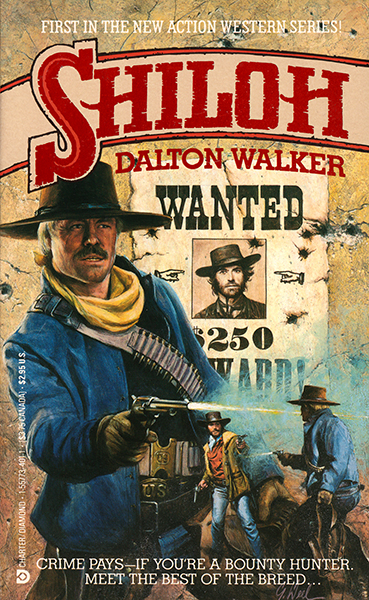 Lawrence Callahan was a heatless killer who deserved to die. And Shiloh reckons he deserves the $1,000 reward for bringing him in. There’s just one or two things standing in his way. Like a little dustball called Splendid, Nevada. Like a man named Merriweather who’s got the town – and the sheriff – under his thumb. Like Merriweather’s two sadistic sons . . .
Shiloh’s not in town one day before he’s on the wrong side of trouble. But the fine citizens of Splendid are about to discover that Shiloh’s only got one side – his fighting side! 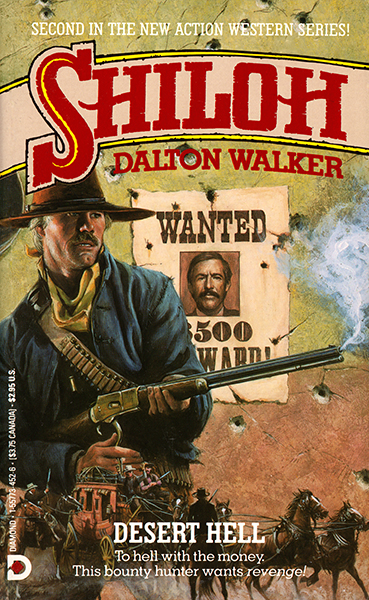 First they killed a man in cold blood. And then they shot Shiloh’s horse. The vicious gang of outlaws, led by a crazed butcher named Follard, didn’t realize they were dealing with the deadliest manhunter alive. But they’d find out – the hard way . . .
Shiloh’s coming after them. There’s no bounty at stake – this time it’s personal. But the body count is rising, the desert sand is red with blood, and Follard ain’t running scared – he’s gunning for Shiloh.
Who is the hunter . . . and who is the prey? 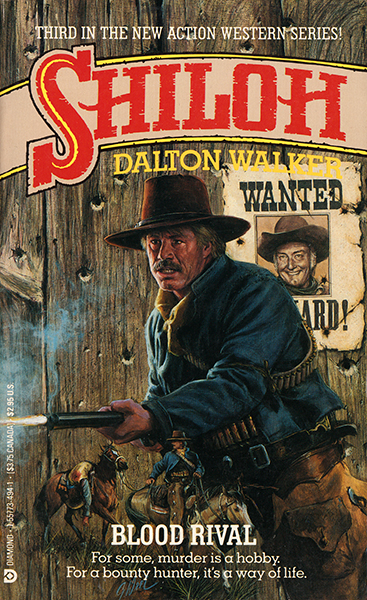 Every man has his price, and tycoon J.W. Bannerman has Shiloh’s figured out just right. The old coot is desperate to win back the only thing he’s ever lost: his daughter. And the mighty chunk of change he’s throwing Shiloh’s way has the bounty hunter thinking he’s the right man for the job.
But before Shiloh can get his nose to the trail, he’s sniffed out by a fearsome rival. A man of his own breed – a bounty hunter. Now the hunter is the hunted . . . and only one can survive. 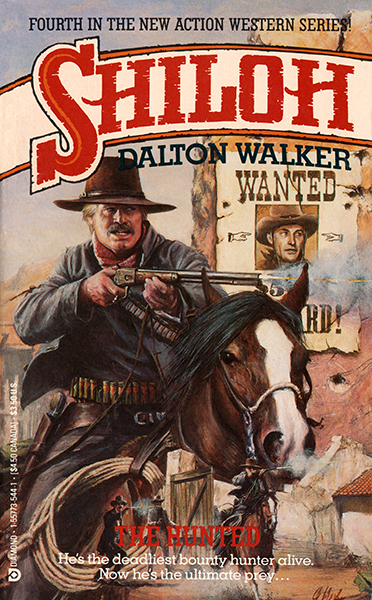 Pinkerton lawman Christian Brady was a good man. Now he’s a dead man – and Shiloh hits the trail vowing revenge against the low-down vermin who slaughtered his old war pal. Then some fool of a badge tosses Shiloh in jail . . . for Brady’s murder.
Breaking out’s the easy part. It’s the crazy lynch mob and cold-blooded posse hot on his heels that’s got Shiloh worried. And when a bounty hunter like Shiloh becomes the hunted . . . there’s no defense quite like bullets and blood. 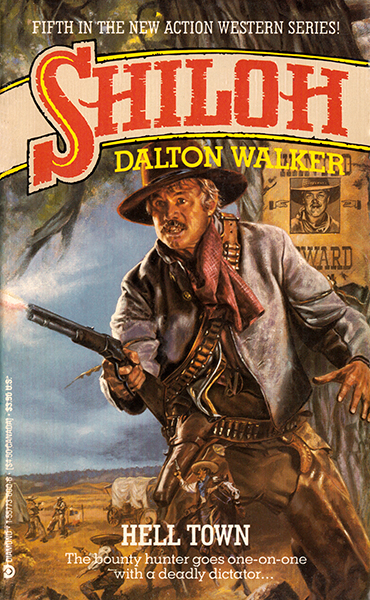 Frank Haven has the evil heart of a dictator, the twisted mind of a madman, and fifty kill-crazy desperados to do his fighting. He holds a small border town in a reign of terror, governing a labor camp where no one finds mercy. Above and below the Rio Grande, every lawman wants him stopped. But only one man has the guts.
Shiloh infiltrates the camp’s inner circle posing as one of Haven’s gun-toting gang. Now the only way out of hell is straight through it – as Shiloh tries to battle Haven with blood and bullets. 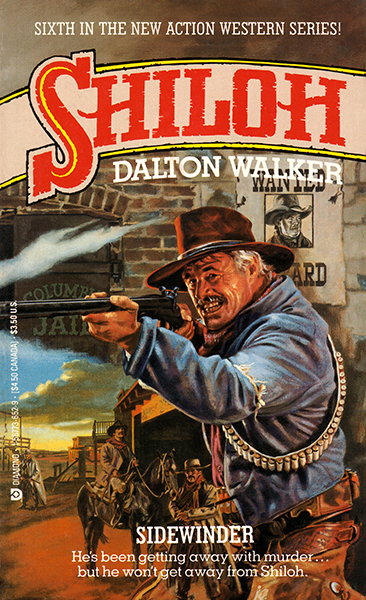 First he killed a man in cold blood. Then the crooked gambler named Ratlin set off across the mining country of northern California, leaving blood and bodies everywhere he hung his hat . . .
What Ratlin doesn’t know is that the deadliest manhunter alive is hot on his trail. And when Ratlin tries to backshoot Shiloh, it’s his first big mistake. Now gunning down Ratlin isn’t enough . . . the bounty hunter won’t stop until he sees this killer swing from the gallows. 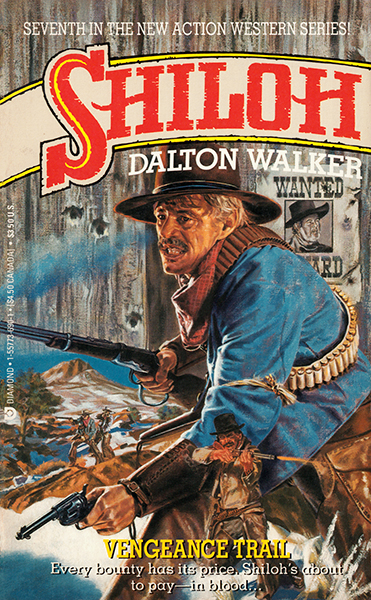 In the midst of a harsh Nevada blizzard, Shiloh takes refuge in an abandoned barn – and finds himself held captive by three low-down ranch hands from the Lazy B. In a blaze of bullets, Shiloh busts out of their trap. But wealthy rancher Horatio Ballock will see to it that Shiloh stays in trouble – and plenty of it.
At a high-stakes card game, Shiloh calls Ballock’s son a cheat. Now he’s got the rest of the Lazy B after his hide, along with a slick gun named Falcon. Suddenly the bounty hunter is on the wrong side of the chase – and he’s running for his life. 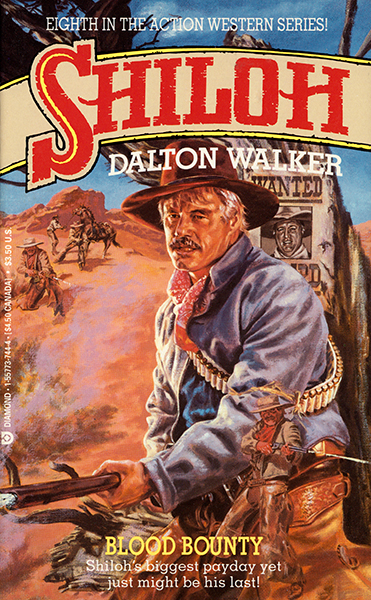 Cephas Beck was a mean old man – a mean, rich old man. When Shiloh trades blows with Beck’s lowlife son Elias, he’s quick to discover that Cephas Beck can pay any price for revenge on anyone who messes with his boy.
But faster than Shiloh can count his new enemies, fate steps in – and Elias meets a cruel death under the hooves of a ferocious stallion. Now Cephas’s greedy dreams of racing the magnificent beast come crashing down in a madman’s rage for vengeance – and Shiloh is hired to track a mount fit for the Devil himself!
Posted by Steve M at 16:42