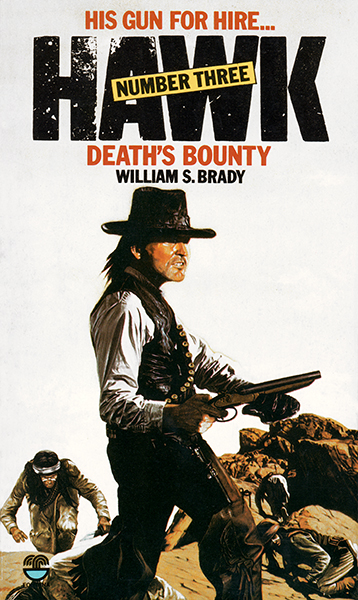 Jared Hawk rode into Santa Maria on the trail of a Mexican outlaw with a $1,000 bounty on his head.

He didn’t know he was riding into a revenge war between the Mexicans and the Apache Nation – until the people of Santa Maria offered him one thousand dollars American to get them out to safety. Down a trail that was lined with blood-hungry Indians.

Hawk took the money and gave his word – and he wasn’t the kind of man who went back on a promise. Even when it meant losing a woman to the harsh code that demanded blood for blood . . . and a life for a life.

William S. Brady is a shared pseudonym. The two authors writing behind that name are Angus Wells and John B. Harvey. To start with, they alternated books, but later the majority were written by Harvey. This was due to a second series being launched under the William S. Brady name with the same two authors writing the books, although it was Wells who wrote the most of them.

Death’s Bounty was written by Wells and it has all his trademarks. Tough, brutal characters fighting to stay alive in a hostile environment. Here’s it’s the cold and snow. The story takes place over Christmas. Hawk is a heartless anti-hero, a man who looks out only for himself, but here he seems to mellow a little when around a certain young lady. Could he be falling in love? He even considers ending his career as a hired gun and settling down with her. His infatuation with Manuela Ortiz leads to more trouble though, for she has a protective brother who soon swears he will kill Hawk. Juan Ortiz and Hawk put their differences aside, promising to face each other once the people of Santa Maria have been led to safety. Trouble is there’s a hell of a lot of Apache’s out to stop them.

Wells describes the many violent deaths in as much gory detail as he can. As followers of this series know, Hawk carries a sawn-down Meteor single barrelled shotgun in a special belt holster. This weapon gets used numerous times and Wells relishes describing what happens when its charge tears through the human body. This story has a massive death toll and it isn’t long before you’ll be wondering just who will be alive by the end.

Hawk doesn’t know about the massacre that starts this tale or why this was done. Even when he does know, he doesn’t really care. All he wants is to stay alive and collect his pay, perhaps start a new life with Manuela.

Wells also includes memories that explain why Hawk is the man he is, why he wears a black glove on his left hand and why he carries that Meteor shotgun.

Like many of the books that come from this group of authors, these days known as the Piccadilly Cowboys, this story contains plenty of gallows humour and also mentions characters from other series, for instance a man who carries a razor in a pouch behind his neck gets a name-check.

For me, this has always been one of my favourite books in the Hawk series and I really enjoyed re-reading it after all this time. It must be some 30 years or more since I last read it. The Hawk books can still be found in used book stores but they can take some searching out. If you don’t want to take time hunting for them at sensible prices, you’ll be pleased to know that Piccadilly Publishing are currently putting the series out as ebooks. For me, it’s a shame they haven’t managed to secure the rights to use the original artwork as I always thought Robert Adams captured the likeness of Hawk perfectly.