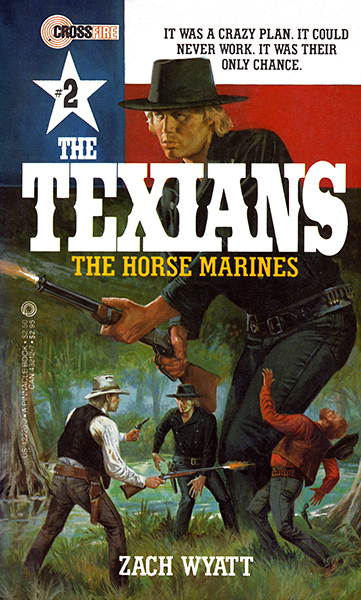 Josh Sands was far from his San Antonio station, but the fierce young Texas Ranger had sworn to protect the entire Territory from her enemies – including the Mexican warships unloading arms in the deadly swamplands along the Gulf of Mexico.

The last thing the hard-riding Ranger expected was to be corralled into Captain Isaac Burton’s mad scheme for capturing the warships himself – with a handful of men who had never so much as seen a rowboat.

But Josh had to pursue a private vengeance as well: to hunt down a death-dealing devil known as Cotton Blue; a vicious gunrunner who had killed Josh’s partner in cold blood; killed for the same pleasure other men found in a woman’s arms…

Like the first book in this series, Zach Wyatt uses a real event for the main part of the plot, the attempt to capture warships that took place in June 1836. Of course, Josh Sands involvement is entirely fictional as is his pursuit of Cotton Blue. Zach Wyatt blends truth and fiction seamlessly, resulting in an exciting read that contains many cliff-hanging moments.

We also learn more about our fictional hero as we witness Sands freeze when looking into the eyes of death. He experiences guilt and struggles to deal with it as he recovers from a life-threatening bullet wound. His fevered belief of being rescued by an angel floating through the swamp made for some very visual and surreal reading which was beautifully told by the author.

Sand’s loss of his fellow Texas Ranger and his final showdown with Cotton Blue sandwich the main part of the story; Captain Burton’s spur-of-the-moment attempt to capture three warships. I don’t want to say anymore about this for fear of ruining this part of the tale for anyone planning to read this book, but I will add that it makes for some gripping reading.

If you like fiction based around real historical events or books about the Texas Rangers then this has to be a must read and I’d also recommend it to all western fans. Zach Wyatt is a pseudonym used by George W. Proctor and this book reinforces my belief that he is an author worth reading.

I always found The Texians books hard to track down, but it’s much easier now, if you don’t mind reading ebooks, as Piccadilly Publishing has made the whole series available in this form.