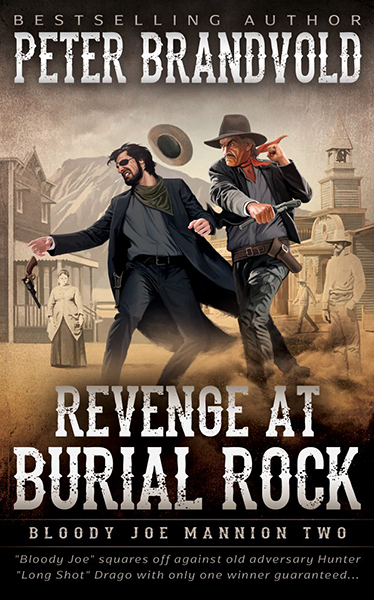 Joe believes the old regulator, “Long Shot” Hunter Drago, who did twelve years’ hard time because of Mannion, has moved to the town of Del Norte in the Colorado Territory to kill him. But, nearly everyone else in town believes he’s there to take over the Three-Legged Dog Saloon and begin a new, peaceful life for himself. Mannion doesn’t buy a word of it. When he catches Drago palling around with his daughter, Evangeline, and beats the old killer half to death on Del Norte’s main street for all to see, the town decides Bloody Joe has finally gone too far.

As the game of cat and mouse continues, Mannion finds himself dodging a veritable lead storm nearly everywhere he goes, culminating in a bloody showdown on the stone mountain called Burial Rock, where he finds that not only his own life hangs in the balance, but that of his lover, Jane Ford, as well.

Beginning shortly after the previous book ends all the survivors are back to face new danger. Peter Brandvold really has created a great set of characters, good, bad, male and female, to struggle through the often-deadly situations they find themselves in.

Bloody Joe’s mistrust of Drago is the main story thread, but there are others too. Joe’s deputy Stringbean has affairs of the heart to deal with that see him facing a murder charge. Joe’s second deputy, Rio, also has woman problems to deal with – his being a little more light-hearted than Stringbean’s, and they often provide some comical scenes that provide some light-relief among the darker and more ruthless plotlines.

Bloody Joe isn’t completely fuelled by violence and anger as he struggles to control the odds that are stacked against him and those he calls friends. He does have a tender side too, usually only revealed to his daughter Evangeline and his lover Jane Ford. This time he may have gone too far for even them to forgive him.

Peter Brandvold never gives his characters or readers a chance to catch their breath as his twisting plot explodes in brutal fistfights and gunfights, these bloody action scenes being quite graphic in their depiction. It’s not just the men who get involved in these savage incidents either as the women will have to fight to survive too.

I’ve read a lot of Peter Brandvold’s books and this series has to be up there with the very best he’s written. Let’s hope Bloody Joe Mannion is in for a long run.