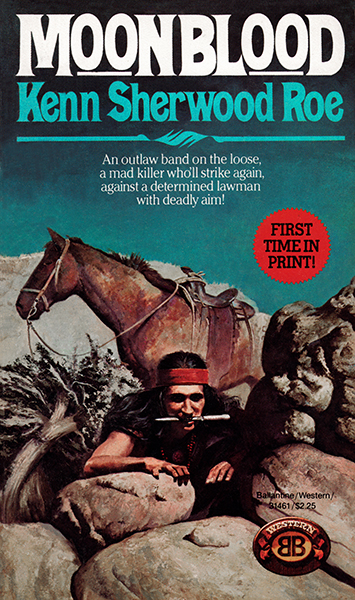 The notorious Osmand gang threatens to take over the town. A lone killer murders again and again to slake a crazed bloodlust. Dirk Landry, the law in the desolate Nevada mining settlement has both hands full.

But he’s sworn to nail that gang and stop that assassin even if it takes twenty years. And even if he’s got to come against the solid citizens of Ingot itself.

I found this book in a box of mixed westerns I bought. The author was a new name to me. A quick search on the internet provided a little information. It would seem that Moonblood was originally written as a stand-alone book, or maybe the author had plans for it to be the first in a series and the publisher didn’t take it up at the time. Eight years later, to the month, a second Marshal Landry book appeared called Dust Devil. Again, there was nothing on the cover indicating it was part of a series. The following year two more books about the lawman were published, these being Death Stalk and Coyote Cry. After that there weren’t anymore.

Moonblood is traditional western that fans of the genre will feel right at home with. Giving Landry two problems to deal with means the action never lets up. There are some fairly brutal scenes, particularly the opening killings, although they aren’t overly graphic.

The more interesting plot of the two for me is that of the lone murderer, Moon, a halfbreed who kills for the sheer pleasure of it. A man who seems unstoppable, who can escape any pursuit easily. Can one man wipe out an entire settlement?

When we first meet Landry, he’s tracking the Osmand gang and the trail leads him to Ingot. Here he gets involved with helping the citizens defend themselves against Moon. It isn’t long before he suspects not everyone is telling him the truth about why they’ve stayed in the dying town, and this storyline adds intrigue to the tale and later provides a couple of plot twists.

The book held my interest throughout and everything was resolved in a satisfactory way and it finished with a neat epilogue too.