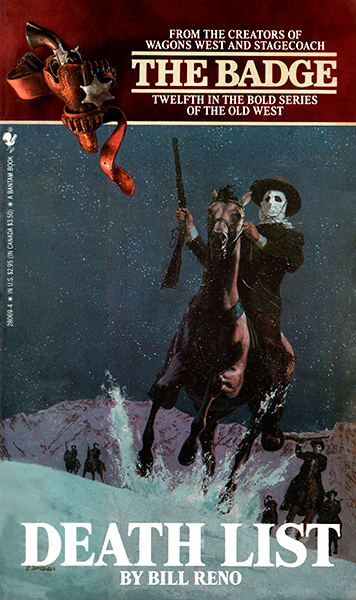 Rancher Bruce Ringle is a man to be reckoned with – and those who don’t usually live to regret it. He is the leader of the Stockmen’s Association, a ring of wealthy Wyoming ranchers bent on taking control of the cattle range, and he’s hired a ruthless band of vigilantes called the Regulators to carry his brutal message to the independent ranchers: either join the association or join the dead.

At the top of the Regulators’ dreaded death list is the name of the newly appointed sheriff, Will Iron. The legendary lawman has pinned on a dead man’s badge vowing to bring the last sheriff’s killers to justice and law and order back to the town. Ringle and his Regulators figure they have the outgunned sheriff just where they want him. But they’re wrong. For Will Iron is also a man to be reckoned with – and the day of reckoning is here.

This series of books has only been linked, so far, by the fact that the lead character wears a badge of some kind. Death List is the first to see the author bring back one of the earlier lawmen for a second outing, in this case Will Iron who first appeared in book four, Powder River.

After the brutal killings that open the book, the author slows the pace down whilst introducing his readers to the various people that will play major parts in this story. For those who haven’t met Will Iron before, the author includes plenty of information regarding his background.

Once Iron arrives in the town of Casper, he soon starts stirring up trouble for those breaking the law and the pace of the story really picks up. A band of rustlers soon adds Iron to their own death list, and Ringle sets out to hire a professional killer to take Iron out. The body count rises impressively as everyone attempts to take control of Casper and the surrounding county.

Bill Reno includes a couple of excellent female roles too, one is Iron’s wife, Vanessa, and the other being Nora Bramley who seems to be hiding a dark secret.

Even though Iron soon figures out who is behind the Regulators, there’s the matter of proving it, and that is the main problem that Iron struggles with. Whilst trying to get the proof he needs, Iron will find himself taking on impressive odds, sometimes by himself, other times with the backing of those that live in or around Casper. The final showdown sees Iron facing his own death as he stands alone against far superior odds.

Perhaps not my favourite book in the series so far, but Death List was readable and enjoyable and I’m certain it won’t be long before I read the next one.

Bill Reno is a pseudonym used by Lew A. Lacy.