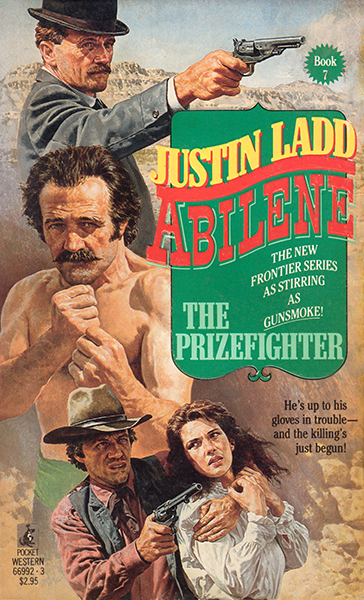 Everyone’s spoiling for Seamus O’Quinn, even though the prizefighter claims he’s only in Abilene to train for his next match. But when a big-city triggerman arrives to give O’Quinn the business, Marshal Luke Travis knows this fight is for keeps. A Chicago mobster has put a price on O’Quinn’s head that’s as good as lead in his back – and there’s a hardcase in Abilene itching to do the job.

O’Quinn’s lawman bodyguard thinks he can handle it alone – until the prizefighter rides into a trap. Marshal Travis and Deputy Cody Fisher are up against the lawman and the gunmen as they try to uncover the truth – and nail two killers before they strike again!

The author opens this book with a couple of brutal killings that introduces the readers to the main characters of the story. Shorty after O’Quinn and his police guard, Jack McTeague who is posing as the prizefighters trainer, arrive in Abilene. For those who’ve read the previous books in this series, a number of people from those earlier tales now find their lives intertwined with that of O’Quinn and McTeague.

McTeague’s frustrations with O’Quinn, as the prizefighter seems incapable of lying low, are portrayed extremely well by the author. One of O’Quinn’s old boxing acquaintances is now a school teacher in Abilene and it isn’t long before they set up a sparring display for the school children, which comes to an unfortunate, yet humorous, end before it’s really begun.

As the story progresses the Chicago mobster discovers where O’Quinn is hiding and sends his hitman to dispose of the prizefighter. The plot is further complicated by O’Quinn falling in love and it’s the girl of O’Quinn’s affections who the killer uses to bait a trap. This all leads to an exciting final showdown involving some of Abilene’s townsfolk too, not least Marshal Travis and Deputy Cody Fisher.

Like the earlier books, this one proved to be an enthralling read. I was hooked from those vicious opening scenes and found it difficult to put down until I discovered how O’Quinn was going to escape with his life and see if his testimony to what he’d witnessed would put the Chicago mobster away.

I would imagine that most fans of western fiction would find this book, in fact the whole series, an enjoyable and entertaining read. I know that I’m eagerly looking forward to reading the next book in the series, something I’m planning on doing very soon.

Justin Ladd is a pseudonym used by James Reasoner.

Thanks for the fine review, Steve. I have read several Abilene novels and share your high opinion of the series. Whatever name he is writing under, James Reasoner always provides first rate entertainment. So far, "The Whiskey Runners" is my favorite novel in this outstanding series but I still have a few more to go.