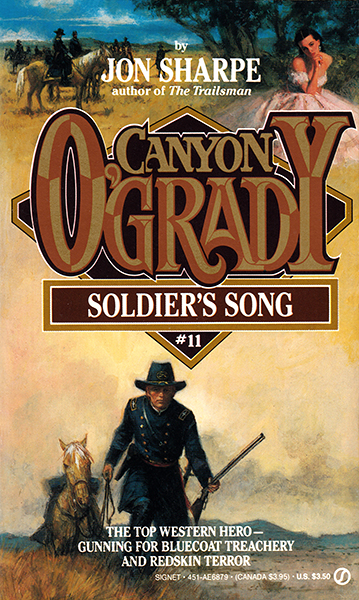 Canyon O’Grady was wearing the uniform of a full-bird colonel. This masquerade was part of the big redheaded U.S. special agent’s mission to find out what was going wrong with the Fourth Cavalry Regiment in Texas.

The gun problem is just one plot thread in this fast-paced read. Another being the health of the Colonel Colton, commander of Fort Johnson and the Fourth Cavalry – O’Grady’s assignment being to discover if Colton is fit enough to remain in charge. Colton has ambitions to become a General, and believes he has to prove himself by leading his men into battle to make this happen. Unfortunately, he’s been making some rash decisions or none at all, and these could prove to be fatal to both him and his men.

There are some terrific battle sequences in this tale, both with the Comanches and the gunrunners. Most of the story, though, revolves around O’Grady’s investigation, his attempts to discover who is selling the army’s guns and also trying to find out who is plotting to assassinate Colonel Colton. The Canyon O’Grady series falls under the banner of adult westerns, so there are also some explicit sex scenes too. There is little in the way of surprises as the author makes the reader aware of who is doing what but following O’Grady’s struggle to unveil the truth makes for entertaining reading.

Jon Sharpe is a pseudonym behind which a number of authors wrote, in this case I believe the author to be Chet Cunningham. If you’re a fan of Cunningham’s Pony Soldiers series you might be interested to know that when O’Grady is discussing tactics with Colton, he describes the exact method that Lightning Troop use in the Pony Soldier books.