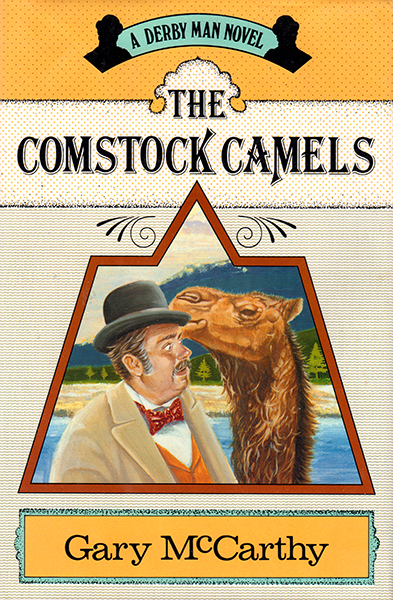 THE DERBY MAN 11
By Gary McCarthy
Doubleday, April 1993
Darby Buckingham, the famous writer known to his legions of dime novel fans as the Derby Man, and his fiancée, Dolly Beavers, run into a pack of unusual beasts on a dangerous road mountain road heading towards Lake Tahoe. Their horses are terrified by the exotic animals, and Darby and Dolly’s carriage plunges into a raging river. Though they escape with their lives, their future fortune, which lay in the profitable pages of Darby’s latest Western manuscript, is now irretrievably washed away in the currents of white water.
Determined to make the owner of the camels pay for his ruin, the Derby Man becomes the unwilling owner of a herd of twelve spitting, dirty and disagreeable camels. Along with all his possessions and his manuscript, Darby has also lost the will to write, so the only answer to his dilemma lies in competing for a freight contract to the Consolidated Mining Company’s most inaccessible mine, the Gold Peak.
Unfriendly Paiutes, scorching desert and steep, impassable trails are not the worst of the problems that now plague Darby. The horrors contrived by the murderous band of another competitor make the unyielding tortures of nature pale in comparison. It will be up to the Derby Man, camels trailing behind him, to create the kind of happy ending for this real-life adventure that he does for his novels.
It’s a well-known fact, that Darby doesn’t like horses, now he may have found another type of animal he hates more. The camels also prove to be the source for many of the humorous scenes that come at regular intervals throughout this fast-moving tale.
Gary McCarthy has also created a terrific set of characters for this story, Big Bert Jasper, the former camel owner and leader of a gang of cutthroats. Then there’s Emil El Babba, the Arab camel handler who will not let anyone harm his beloved camels, even the Derby Man. It’s also great to see the return of Bear and Zack. All these and more come together to take part in the race to win the contract from the mining company.
There’s plenty of action, be that brutal fist-fights or exchanges of lead. There’s the mystery of who is killing off the other competitors, although this isn’t kept a secret. The final confrontation between Darby’s band and the killers takes another twist as the Paiutes arrive ready to wipe out everyone. Can Darby use the camels to save the day?
For me, it is a great shame that this book is the last of the Derby Man novels. I’ve enjoyed every one of them. Gary McCarthy surely came up with one of the most unusual western heroes in his portly, ex-circus strongman, prizefighter and novelist Darby Buckingham. All the books have been hugely entertaining, mixing both nail-biting action, superb characters and comical situations. The majority of the stories also revolve around real events adding historical interest too. The Derby Man series gets a high recommendation from me.
Posted by Steve M at 13:12

An action filled book. Gary keeps you turning the pages.....

Love Darby the Derby Man!. This is a timely review, because the saga continues. Day after tomorrow, Gary McCarthy is putting out a new volume, The Horsemen and The Derby Man, a crossover with his Horsemen series, which I have not yet read. Looking forward to that.