Longarm and the Bank Robber's Daughter 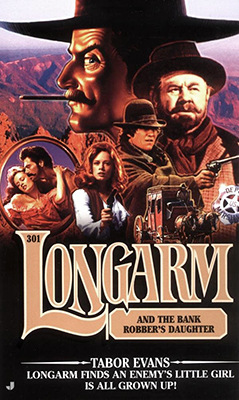 U.S. Deputy Marshal Custis Long opens his door to a visitor—just in time to see him die in a hail of gunfire. The killers get away…and the victim leaves Longarm with the words “stolen gold” and “Sweetwater Canyon”…

The dead man once shared a cell with Clete Harrigan, a notorious bank robber Longarm put behind bars years ago. The army payroll that Harrigan’s gang stole was never recovered. Now Longarm thinks it just might be hidden in Sweetwater Canyon in New Mexico.

Before he can depart, Harrigan’s daughter Emily arrives, wanting to make amends for her father’s crimes by helping retrieve the money. With outlaws in pursuit, Longarm can use the help. But is she as lovely as she seems—or as lowdown as her daddy?

This time, the author behind the pseudonym of Tabor Evans is James Reasoner and he provides us with a cracking tale. The action comes thick and fast as Longarm searches for the long missing army payroll.

From the word go someone is out to stop Longarm getting to Sweetwater Canyon but he battles through. Once there Longarm finds himself in a range war and the canyon is part of the land being fought for.

There are plenty of suspects in the well-drawn characters that Longarm meets during his hunt for the payroll. Any one of them could be behind the attempts on his life and I didn’t guess who that was as this person’s identity was kept well-hidden until the author was ready to reveal who it was. Once you think the investigation is closed James Reasoner springs a sting in the tale that I didn’t see coming that rounds the book off well.

This is an excellent entry in the long running series and is certainly worth checking out.

Thanks Steve for the look at LONGARM & THE BANK ROBBER'S DAUGHTER. Old Custis remains my favourite of the Adult Western heroes. Occasionally come into a new (for me) title once in a while. Gotta love those used books stores.

LONGARM AND THE MOUNTIES (Longarm #16) by Lou Cameron is still my fave title, of course.