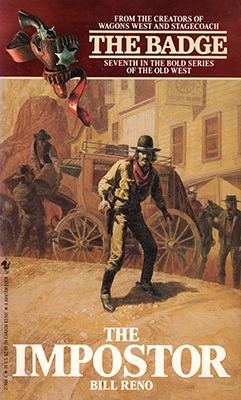 
Outlaw Jack Decker and his gang are in Dodge City, and they’re out for blood – gunfighter Johnny Valentine’s blood. When Decker makes the mistake of gunning down Valentine’s brother instead, Johnny vows to find Decker and make him pay. Valentine dons the badge of a U.S. marshal and heads out onto the range, looking for Decker’s murderous gang. But he finds more trouble than he bargains for: a killer tornado, a renegade pack of bloodthirsty Kiowas, and a scorned woman who has vowed to find Johnny Valentine and put a bullet between his eyes.

The Badge is a series of 24 books that are linked only by the fact that their heroes wear a badge of some kind, although I believe one or two characters do appear in more than one story. Each book, therefore is a stand-alone tale.

Bill Reno is a pseudonym used by Lew A. Lacy and he is an author that knows how to write page-turners that capture the readers’ imagination easily through excellent characterization, visual descriptions of both landscape and action, and with gripping story-lines that twist and turn and offer surprising outcomes for some of his characters, both good and bad.

The Impostor has as its main theme the desire for revenge and this drives a number of different people, including Suzanne Lane, whose need for vengeance is as just as that of Johnny Valentine’s. When Valentine takes on the identity of a dead lawman it isn’t long before he’s riding alongside the unsuspecting Suzanne, and the story builds to the moment Suzanne discovers his deception superbly. The need to find out how she reacts to this discovery, especially as she’s falling in love with this fake lawman, the man she’s vowed to kill, is what makes this book so hard to put down.

The Badge books are hard-hitting, action-packed and often quite dark in tone. You can never be sure who will be left alive at the end either. All this adds up to compelling reading that leaves me eager to pick up the next in the series straight away.

Sounds like a good series. Glad I was able to get one of these. I'll have to seek out more